BOB ABERNETHY, host: Analysis and discussion of some of the week’s news now with Kim Lawton, managing editor of this program, and Kevin Eckstrom, editor of Religion News Service. Welcome to you both. Kevin, an obscure publicity-seeking pastor in Florida oversees the burning of a Quran, and there are deadly riots in Afghanistan.

KEVIN ECKSTROM (Editor, Religion News Service): Right. It’s a real challenge for this country because the more attention that people pay to him the more he’s sort of egged on to keep doing this kind of thing. But if we don’t pay attention to what he’s doing, the Muslim world thinks that we don’t care whether or not Qurans are being burned in the United States or that they think that maybe all Christians or all Americans are burning Qurans when that’s clearly not the case. But it’s a real pickle as to how much legitimacy you give this guy, because the more he gets, the more he’s going keep going. 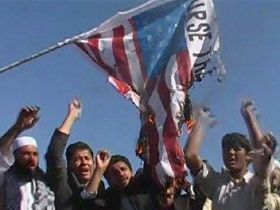 KIM LAWTON (Managing Editor, Religion & Ethics NewsWeekly): And what actually happened was he had a mock trial where he put the Quran on trial, and he actually had an imam speak in defense of the Quran, but in the end the Quran was found guilty, and that’s when the burning occurred. That was put on the Facebook page, on his Facebook page. It was put on Youtube. But it happened on March 20. The riots happened quite awhile after that, in part because local leaders, Muslim leaders in Afghanistan, manipulated it. You know, people in the country there didn’t necessarily know about it. Most Americans didn’t know about it, except for the fact that people went through with loudspeakers in some of these towns, and there was also an allegation that hundreds of Qurans were burned here. So there was a lot of manipulation about what really happened as well, for a lot of different political purposes.

ABERNETHY: Another frustration: the ideological stand-off in Washington over the budget.

LAWTON: Well, Republicans this week unveiled—while Congress was talking about how are we going to fund the rest of this year, the Republicans also unveiled their blueprint for 2012 and beyond, and they proposed a very radical restructuring of Medicare/Medicaid, some of those other programs. The congressman who introduced it said it was a moral obligation to do something about Medicare/Medicaid, because it just is simply unsustainable in its current effect, and that has a lot of religious groups talking and debating. 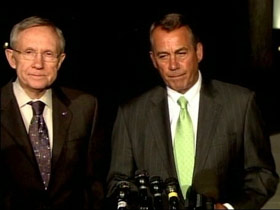 ECKSTROM: Right, and right now we are talking about, you know, a hundred million for this, two hundred million for that. It’s relatively small potatoes. What’s important about this Republican plan is that it’s a big-picture, long-term ideological blueprint for how we should fund the government and fund the services, and the bottom line is that it proposes taking in less revenue through lower taxes on corporations and the wealthy, at the same time cutting services to folks who really can’t afford to have those services cut. So a lot of religious groups say that it’s immoral budgeting to be able to try to balance the budget on the backs of the folks who can’t afford to.

ABERNETHY: And Kim, there was a Supreme Court decision this week that worried a lot of people interested in the separation of church and state.

LAWTON: Well, the justices in a very close decision rejected a challenge to a program in Arizona that gave tax credits that eventually got funneled to private schools, mostly religious schools in that particular case. Some taxpayers had challenged that, saying that’s an establishment of religion, and the court said those people didn’t have the standing or the legal right to bring forward that case, so it’s going to make these challenges to church-state cases more difficult in the future.

ECKSTROM: Right. Since 1968 Americans have had a right to challenge these sorts of cases when they think that the government is improperly funding religion. The Supreme Court has said that. And what’s happened in this case and then in a 2007 case, a challenge against the White House faith-based office, is the court is really tightening the screws on this, on making it harder for people to challenge these programs that they think are unconstitutional.

ABERNETHY: So looking around we have humanitarian crises all over the place, we have natural disasters, we have budget stand-offs.

LAWTON: And rumors of wars.

ABERNETHY: Maybe next week will be better.