RABBI SHARON BROUS (IKAR, Los Angeles): Passover is the centerpiece of the Jewish moral imagination and the Jewish collective memory, and so every aspect of Jewish liturgy, of the calendar, of the Jewish experience in the world is in some way rooted in the experience of the Yetziat Mitzrayim, of the Exodus from Egypt. 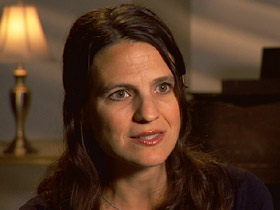 We live in this very paradoxical relationship with slavery that’s enunciated through the pages of the Haggadah, the book that we use to guide us through the Seder experience, in which we both articulate that we are free and we’re celebrating our freedom but also we are still slaves and maybe next year we’ll be free. We recognize that our freedom is intimately linked to the freedom of those who are most vulnerable in our society today, and we can’t be fully free until they are also free.

I think actually the symbols on the Seder plate are some of the most powerful ways of communicating what the essence of the Passover experience really is about. So we have the egg, which is the symbol of the possibility of something completely new entering into the world. We have the karpas, the greens, which is something that seems like it’s completely dead finding new life, and we dip it in salt water so we remember the tears that we shed during the time of our suffering and we remind ourselves that something beautiful and something new emerged from the depths of that suffering. There is the charoset, the sweet—it’s this sweet-tasting apple cinnamon mixture which actually comes to remind us of the bricks and mortar when we were slaves in Egypt, which I think is so interesting. There’s something about this sort of sweetness of being stuck in a life that you know you don’t want to stay in, but it’s comfortable because you’ve been there for a long time. And then on the other side there’s chazeret, the lettuce, which is a kind of bitter lettuce which comes to remind us that even once we’re in freedom there’s a kind of bitterness that comes with everything that’s unknown. And the shank bone, the symbol of the Paschal lamb. The idea of this is that freedom came to the Israelite people after the night that they were willing to go out and actually put the blood on the doorposts of their home and say, “I’m ready to take part in my own liberation right now.”

All of the rituals around Passover are designed to shake us out of our complacency and basically awaken us to the memory of the experience from Egypt, so that it’s not only that we’re remembering a story that our parents and grandparents and great grandparents told, but we’re actually remembering it in our own human experience, that I remember walking from slavery to freedom because I was also there.