FRED DE SAM LAZARO, correspondent: With its high walls, gates, and rituals, the Bhopal central jail looks forbidding, almost medieval. However, inside is a world of routine and order. It starts with the morning roll call for some 2000 men—-about a third more than the prison is supposed to hold—some of the most notorious convicts in the surrounding region. As in every prison there’s a hierarchy here, a subgroup of elite inmates. But these guys have earned the distinction not for being tough, but for being calm. In the prison’s main hall, some 150 men are led in the deep breathing yoga exercises by one of their own. For much of the morning, they’ll go through the whole cycle of yoga’s asanas, or postures, and breathing exercises that cover the entire body.

BINKU TOMAR (prison inmate convicted of murder): I feel healthy when I do yoga, and I don’t have any violent thoughts. It helps me have positive thoughts. 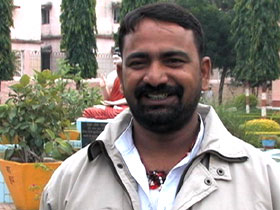 SURAJ BOSE (prison inmate convicted of murder): In the past, before yoga, my mind used to wander a lot. I used to be like a bird in a cage. I used to have a lot of anger.

BOSE: I get a lot of peace of mind after doing yoga. Whenever I do yoga exercises I really feel at peace. You really want to be at peace here.

DE SAM LAZARO: And they have one more significant incentive. For every three months in the yoga program, their jail sentences are reduced by 15 days. In India, even people sentenced to life can have their sentences reduced to as little as 14 years for good behavior, an evaluation largely in the hands of prison staff.

BOSE: I am hopeful. I’ve done my crime, and I have to do my sentence. It will be up to the officers to decide if my sentence will be reduced.

DE SAM LAZARO: For their part, prison officials say yoga, which was introduced into this facility two years ago, has brought them peace, too.

LALJI MISHRA (Prison Superintendent): We used to have a lot of conflicts, but we don’t see very many now. People are respectful of each other. 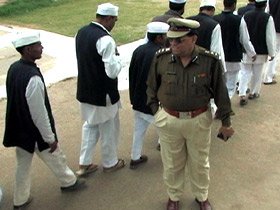 DE SAM LAZARO: Jail superintendent Mishra says the yoga program is being expanded across the prison system. Not only does it calm the jail atmosphere, he says, but it may also help thin the ranks through early release of those who’ve completed a course in yoga. He says the prison system in this central Indian state of Madhya Pradesh is overcrowded and understaffed.

MISHRA: We have 120 jails and 17 doctors for about 35,000 inmates. We have 40 health workers, but that’s not enough staff to look after the health of all the prisoners as is called for by the national human rights committee. We need to find a way to gradually release more of them.

DE SAM LAZARO: Prison officials say very few inmates who go through the yoga program have resorted to crime after their release. So the key question is: has yoga transformed these men—and how?

The most common definitions describe yoga as a system of exercises dating back 3000 years, practiced as a part of the Hindu discipline to promote control of the body and mind. At the prison, inmates also come from Muslim, Christian, and other faiths, so the superintendent says yoga is never presented as an extension of Hinduism. The majority of inmates here are Hindu.

MISHRA: Anyone who breathes can do yoga. If you breathe, yoga belongs to you. 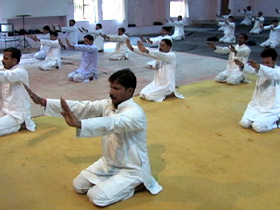 KAMLESH MISHRA (Yoga Scholar): If you practice yoga, it’s not just about making your body fit. It’s about a changing your mental state, your consciousness. The breathing exercises help increase oxygen flow to the vital organs. It stimulates the nervous system, brings sympathetic and parasympathetic nervous systems into balance. The whole way how you look at the work, look at other people, is transformed.

TOMAR: I can control my anger now. I want to go away from crime. I want to join the mainstream of society and support my parents.

BOSE: I’m not sure what kind of work I’ll get, but I know I’ll continue to do yoga.

DE SAM LAZARO: Whether and how long that resolve will endure is the key question. In other words, are minds truly transformed? Even a few inmates confess they’re not sure.

PRASHANTH TIWARI (prison inmate convicted of murder): I am definitely a changed person. I have good thoughts, but what about the others, those who would attack me? What are their thoughts? I would not be the first attack someone, but I would be the second if someone attacked me.

DE SAM LAZARO: There’s no hard evidence yet on the impact of yoga on recidivism, but prison officials say with the health and management benefits they can see no downside to a morning yoga class.

For Religion & Ethics NewsWeekly, this is Fred de Sam Lazaro in Bhopal, India.