KIM LAWTON: The 2012 presidential campaign is kicking into gear, and potential Republican candidates are already courting religious conservatives. The newest official GOP contender is former Massachusetts governor Mitt Romney, who announced his candidacy Thursday (June 2). Romney says his Mormon faith should not be a political issue, but it was a concern for some conservative evangelicals in the last election. In 2008, more than 40 percent of Republican primary voters were evangelicals. With that in mind, a parade of presidential hopefuls and other GOP leaders spoke to religious conservatives in Washington this week at a meeting organized by the Faith and Freedom Coalition:

JON HUNTSMAN, (Former Governor of Utah): I want to thank you for forming this Faith and Freedom Coalition, because nothing long survives without advocates, and that includes values.

LAWTON: Joining me is now Cherie Harder, president of the nonpartisan Trinity Forum. Before that, she worked in policy positions for First Lady Laura Bush and former Senate Majority Leader Bill Frist, a Republican. Cherie, welcome. 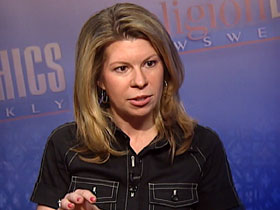 LAWTON: How important are religious conservatives, and specifically evangelicals, to the whole Republican coalition?

HARDER: Well, they’re quite important. One thing I think I should mention is, of course, “evangelical” spans a whole range of ideological temperaments. I mean, within the evangelical umbrella you have everyone from Jim Wallis to Jim Dobson, Beverly LaHaye to Shane Claiborne. So that term usually applies theologically. Lately, it’s also applied politically, but I think it’s important to remember that, of course, there are people of many different political persuasions, though, who would call themselves evangelicals. But within the political spectrum, they remain important, although I think that both the agenda is broadening, and I think we should be careful not to consider them as a monolith anymore then we would consider, say, women voters as a monolith.

LAWTON: But they have tended to vote overwhelmingly Republican. I mean, at the last election we saw a little bump for Barack Obama. Twenty-six percent of evangelicals, self-identified, voted for him. That means, you know, seventy-five percent still voted Republican. 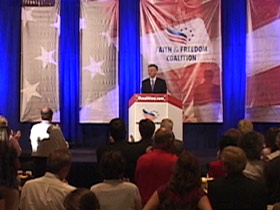 HARDER: Oh, I think there’s no doubt at all that there are certain agenda items that are going to be very important to evangelicals, many of them social and cultural agenda items. I also think though that in the election coming up you are going see some really key differences. For example, in this coming election it seems that many economic and financial issues are really at the forefront as opposed to social issues. I also think that you are going to see a broadening of the agenda. There are many evangelicals who have been very much at the forefront of humanitarian issues, of different issues related to international relations, aid to the poor, even environmental issues and creation care, so that the agenda that in the past has characterized evangelical involvement I think you can count on as broadening.

LAWTON: But where is that going then end up in terms of support for particular candidates, and especially if you are looking at the Republican spectrum? Are evangelicals sort of lining up behind anyone in particular right now?

HARDER: Well, I mean, that is the big question, and I think at this point we haven’t seen evangelicals fall squarely behind one particular candidate. I think there’s still a lot of sorting out to be done, and I don’t think one candidate has really just emerged as a frontrunner in that area. There’s a lot of qualified candidates out there. I think evangelicals are taking their time. They’re evaluating the candidate on terms of a variety of different factors. And last time around we had a few candidates that really did seem to have a strong hold on the affections of many people who would describe themselves as evangelical in terms of their voting. This time around it’s going to look different.

LAWTON: And very briefly, do you think Mitt Romney and Jon Huntsman, another potential candidate, also a Mormon—is that going to be an issue for evangelicals?

HARDER: You know, again, evangelicals aren’t a monolith, so on one hand anything I say is going to be a generalization. But I think generally evangelicals, like other Americans, are looking for a qualified commander-in-chief who represents their values and can be counted on to lead the nation wisely and in a strong way. They are not looking for a pastor-in-chief, and so I think most evangelicals, like most Americans, recognize that they may have theological differences at points with the man or the woman who might be president.