KIM LAWTON, managing editor and guest anchor: There were also rising concerns about the situation in Libya. NATO stepped up its airstrikes while alliance leaders called for more support in the effort to protect civilians. Meanwhile, a UN human rights panel said Moamar Gaddafi’s forces have committed crimes against humanity. Secretary of State Hillary Clinton met with regional leaders to discuss future strategies, but the Obama administration is coming under increasing pressure. Last week, the House of Representatives approved a measure giving the president until June 17 to provide detailed justification for why the US got involved in Libya and why it should continue. An even tougher measure is being taken up in the Senate.

Joining me now is Gerard Powers, director of Catholic Peacebuilding Studies at the Kroc Institute for International Peace Studies at the University of Notre Dame. Jerry, we’re hearing a lot about political and financial questions about the situation in Libya. What are some of the moral and ethical questions that should also be considered right now? 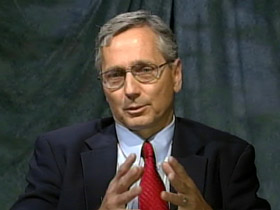 GERARD POWERS (University of Notre Dame): Thanks for having me, Kim. I think there are three broad questions. One is, were we morally justified in going in in the first place? The second is are the means that we are using morally justified, or are we proving through the means we are using that humanitarian invention, as some allede, is really just an oxymoron? And three, I think we have to think about what an ethics of exit means in Libya.

LAWTON: Well, let’s unpack all of that. Were we justified in going in? The president said it was to protect civilians.

POWERS: I think humanitarian intervention in extraordinary cases to protect the civilian population is justified, and not only that, there’s a duty in some cases to do that. My concern is that that objective seems to be subsumed by other objectives. We are focusing on regime change, not just protecting the Libyan civilians, and that will likely prolong the war and actually increases the risk to the very civilians we’re purportedly there to protect.

LAWTON: And how does that change the moral calculus? If the mission or the purpose seems to be changing, does that then effect how we look at it from a moral perspective?

POWERS: I think it does, absolutely. The only way you can keep humanitarian intervention from becoming a guise for the great powers like the United States to intervene for self-interested reasons under the guise of humanitarian intervention is to have strict criteria, and one of those is to make sure that you limit your objectives to the original humanitarian objectives. In this case, I’m concerned that not only are our objectives expanding, but the means that we are using are not appropriate to meeting those objectives, because we are pursuing a zero-casualty war, at least zero casualties on our side, by an exclusively air campaign, and that raises serious questions about can we really achieve our legitimate humanitarian objectives through bombers, cruise missiles, drones, and now attack helicopters.

POWERS: I think we should be pursuing not the almost exclusively military strategy that we are now pursuing, but we need to pursue a political strategy. We need to go beyond the current position of the United States and NATO, which is that we will not negotiate until, even on a cease-fire, until the Gaddafi regime steps down, and that’s not a serious political, not a serious political strategy. Secondly, we need to be much more serious about the consequences of being successful. What comes after Gaddafi? Are we going to be in another nation-building situation like Iraq and Afghanistan? And are we really prepared to assume the heavy moral responsibilities that come with that?

LAWTON: Alright. Well, obviously a lot of very complicated questions. We will be watching and debating.

LAWTON: Thank you so much, Jerry Powers.

POWERS: Thanks very much for having me.