DEBORAH POTTER, correspondent: One iconic image of the Paris that tourists come to see is Notre Dame Cathedral, a centuries-old symbol of Roman Catholicism in France. But inside this Catholic church in Paris, the sparse congregation reflects a wider truth: Christianity is on the wane across Western Europe, and nowhere is its decline more visible than in France.

REV. MICHEL BRIERE: The eldest daughter of the Church, that’s what we were called. Today, saying you believe in a religion takes a real identification of faith. Today, the number has really diminished.

POTTER: Twenty years ago, about 80 percent of French people described themselves as Catholic. Today, it’s just over half and less than 5 percent—most of them older—regularly go to Mass. Father Briere blames a growing culture of consumerism and a Catholic hierarchy that he says has been too rigid, failing to draw young people into the Church. That’s true across Europe, but France is a special case, a country where religion is widely seen as a source of trouble. If France had an official religion it would be laicite or secularism, a principle that’s enshrined in this country’s constitution and reflects its history of religious wars between Catholics and Protestants, as well as the French Revolution, that basically booted the Catholic Church from power.

That history lives on in French movies and classrooms, where students are taught in gory detail about a 16th-century massacre, when thousands of Protestants [Huguenots] were slaughtered by the Catholic forces of the King. And that history still lies on public display in Paris. These are the bones of Catholic priests killed and mutilated by a revolutionary mob in 1792—small wonder that the French concept of separation of church and state is strikingly different from that in the US, says Jocelyne Cesari, a French political scientist and research fellow at Harvard. 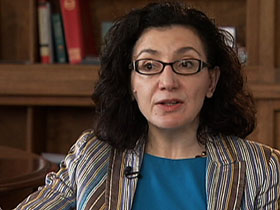 PROFESSOR JOCELYNE CESARI (Center for Middle Eastern Studies, Harvard University): There is this idea that the state has a responsibility in France to control and regulate religion that otherwise can lead to civil war.

POTTER: That control extends to the churches themselves, including Notre Dame, which all became state property 100 years ago, along with existing synagogues. Another example: in France, for a marriage to be legal it has to take place at a city hall. Church weddings are ceremonial but not official, and the wall between church and state doesn’t end there.

CESARI: In the French case it means also restraining or limiting as much as possible the public manifestation or expression of religious groups. In other words, in France it’s better if you act civilly with no religious affiliation. It’s seen as more legitimate, while in America it’s quite the opposite.

POTTER: But the idea that religion should be kept private has collided with the reality that France has changed. Islam is now the country’s second biggest religion. France has the largest Muslim population in Europe—almost five million, twice as many as in the United States, according to recent estimates. Many are the French-born children and grandchildren of Muslim immigrants from former colonies like Algeria, who moved to France after independence in the 1960s.

M’HAMMED HENICHE (Union of Muslim Associations): Those who practice today are not the same as those who practiced before. They were people who came from their homelands, immigrants, so they tried to be as quiet as possible. Today, these are French people who never set foot in the Middle East or Africa. They were born here, grew up here, and they are practicing Muslims and they are reclaiming their religion. They see themselves as French and Muslim. Why would they hide their religion? 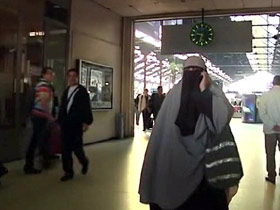 POTTER: They may not want to hide it, but in some cases they’re being forced to. Over the past decade, the French government has clamped down on the display of religious symbols. Since 2004, students have not been allowed to wear headscarves, large crosses, or skullcaps in public schools. The result: new Muslim schools like this one, where every girl in this 11th-grade class wears a headscarf. “We come because we can wear it,” one of them says.

This year the government went further, banning the niqab or full-face veil not just in schools but in all public places. The law affects a tiny minority of Muslims—only a few hundred women wear it in France—but those who do were outraged.

WOMAN: When I hear France—liberty, equality, fraternity—it’s a big lie. I feel like I’m in a dictatorship.

VERONIQUE RIEFFEL (Islamic Cultures institute): The ban is a very bad thing because, you know, every Muslim, even men and even women who don’t wear the niqab, feel concerned, you know, feel rejected by this ban.

POTTER: But the vast majority in France approved of the ban—80 percent, according to public opinion polls.

WOMAN: Look, I think secularism is indispensable. It’s a protection so everyone has peace, believers and non-believers, and so all these religious, fanatic excesses are regrettable, appalling. I’m very much a feminist. I hate the idea of the veil. 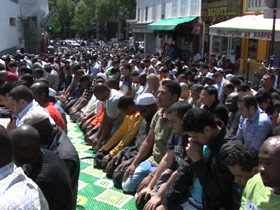 POTTER: Despite the new laws, a very public display of religion takes place every Friday in this Paris neighborhood. Two streets are closed to traffic so thousands of Muslim men can pray outside a mosque that’s much too small to hold them all, largely because of property costs. France has just 2,000 prayer rooms and a few dozen full-sized mosques. While the community solicits donations to build new ones, the local government allows this public exercise of religion, to the annoyance of some non-Muslims. There are other chinks in the wall of secularism. Religious schools can receive state funding. Most national holidays come from the Catholic Church calendar, and once a year Catholics from all over flood the streets of Paris as they leave on a three-day, 75-mile pilgrimage to the Cathedral of Chartres.

OLIVIER BOBINEAU (Paris Institute of Political Studies): But people don’t like it. They don’t like it, even Catholics. The pilgrimage to Chartres? Those are fundamentalists , traditionalists. Our culture erases religion. We’re here but we don’t show ourselves.

POTTER: Olivier Bobineau teaches the sociology of religion and lives it himself. He’s a Catholic who wears a small cross on a chain that he keeps hidden most of the time. But one night, at a meeting with high government officials…

(speaking to Bobineau): … so you leaned forward, you could see it, and somebody said.. 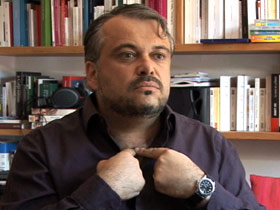 POTTER: … put that away.

BOBINEAU: Yeah. Today it’s unimaginable to go against the state, against the public space, and to show a cross, a skullcap, a veil. It’s impossible. It’s wanting to destroy the state. That’s what the French feel. The majority of French people do not think it’s possible to be French and Muslim. Most French people think you can’t be a citizen and believe in God. We are the most atheist people in the world. Why? Because when you are a believer, in France people think you have lost your freedom, your reason, okay?

POTTER: The French also remember the violence that broke out across the country a few years ago. For two weeks, young Muslims angry about unemployment and discrimination took to the streets and burned thousands of cars, and that anger has not entirely subsided.

HENICHE: We are a little anxious. I have to tell the truth. We are anxious. You sense it among the faithful because the faithful are returning to the mosque. Maybe that’s a positive thing. It’s pushing Muslims to return to the mosque. They sense a threat, that the days ahead won’t be better days for us.

POTTER: The tension comes down to a fundamental disconnect, with French Catholics seeing Islam through their own secular prism. 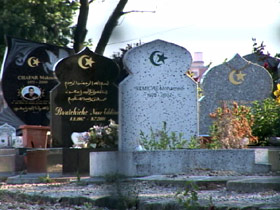 CESARI: What they are expecting from Muslims is this kind of very loose connection with no particular affiliation to Islamic organization, with no particular desire to dress differently or to eat differently, but okay, you can be buried as a Muslim or you can marry in your—you can have a religious ceremony in your mosque. This would be okay.

POTTER: Underlying the debate over Muslim dress is the question of security after 9/11.

BOBINEAU: People say that’s what religion is. It’s violence. Look at the news, the Twin Towers, bin Laden. The news reinforces the illusion that this is a war of civilizations.

HENICHE: We think we have work to do to convince the French people, to show them that Muslims are patriots, and the proof and history is with us.

POTTER: The Great Mosque of Paris is one piece of that history, built by the French government in the 1920s to honor Muslim soldiers who fought and died in World War I. At this cemetery outside Paris, the only all-Islamic burial ground in France, each grave represents a Muslim family’s decision to call France home. The new generation sees itself as both Muslim and French, no matter how uncomfortable that makes their secular countrymen.