KAREN HUMPHRIES SALLICK (Tibetan Buddhist Practitioner): The mandala is a teaching and meditation tool so that we can focus on evoking in ourselves the Buddha nature that we Buddhists believe you have inside you.

A sand mandala is made typically from precious stones that have been hand-ground and then hand-dyed. The sand goes in a funnel. They’ll rub it and the sand will come out. That’s how they put these layers of sand down to create these beautiful, spiritual forms of art. 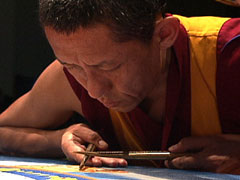 One can use the mandala as an aid to meditation helping you through the process of eliminating emotions that are unhelpful to you so that you can then uncover and evoke what’s in the center.

There are thousands of mandalas, and, in fact, even for one type of mandala there are several ways to do it, depending on how much time the monks have. You can take five days. You can take a month to build a mandala. Every aspect of the mandala has meaning.

The next ring outside of the central figure of compassion are representations of four different Buddhas. The Buddha for eliminating hatred is represented by a thunderbolt. Then we have a jewel that represents the deity that can eliminate suffering. Then we have a wheel of knowledge or dharma, the deity that represents the elimination of ignorance. And then the last is a green sword that cuts through jealousy.

The next circle are lotus leaves. If you’ve ever seen a statue of a Buddha, they are often sitting on a lotus flower, so the family of Buddhas that are represented in the center are sitting in a ring of lotus.

Then outside of that is the vadra ring of protection from negative thoughts.

Finally, in the very outside ring — fire, and that fire is to burn through ignorance to enlightenment.

The dissolution is actually a very important part of the mandala process, because it really is showing the nature of impermanence. As Westerners, we get so attached to things. So here’s this beautiful mandala that these monks have worked five days on. And, with no emotion whatsoever, they reach their hand into the middle and just mess it up. And then they’ll sweep it up with brushes, and they’ll place it into a vase.

The Tibetans believe that anyone who watches the building and dissolution of a mandala actually accumulates merit and can begin to evoke that Buddha nature, being the most compassionate we can be.