BOB ABERNETHY, host: We have a profile today of the writer and retired Presbyterian minister Eugene Peterson. His latest book is “The Pastor,” a memoir that includes Peterson’s concerns about how hard it is for pastors and everyone else to live Christian lives in modern America. Peterson is best known for one of his many earlier books, “The Message,” his translation of the entire Bible into everyday American English. “The Message” has sold more than 15 million copies worldwide.

Peterson lives now in northwestern Montana near Glacier National Park. In late winter it is both majestic and full of life. Peterson grew up nearby, in Kalispell in the Flathead Valley. His father was a butcher who built a summer place on Flathead Lake, which Peterson and his wife, Jan, expanded and improved. When we met there, I asked Peterson about his theology, but he said he has little time for anything abstract. He listens for the holy, he said, in people and in the quiet of the place he loves.

EUGENE PETERSON: How do you pay attention to the unheard, the unseen? In a cluttered, noisy, distracted society it’s very hard to do it. A lot of the language in the church—well, not just the church, in religion itself, has to do with trying to figure out the truth of things. What’s true? What’s true? And I’m not really interested in what’s true. I want to know if I can live it. I want to test it out. 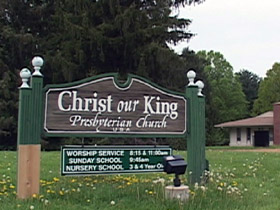 ABERNETHY: Peterson was the founding pastor and for 30 years the minister of Christ Our King Presbyterian Church near Baltimore, Maryland. Because he had been trained as a scholar, he started out giving lectures from the pulpit.

PETERSON: After a couple of years I realized, you know, this isn’t working, and I began to change the way I talked, the way I preached, the way I taught, so I was inviting conversation, and you enter into the soul, the spirit of somebody else by listening to them, not by telling them something. I get asked, what do you miss most about being a pastor? I think it’s the intimacy, the incredible gift of intimacy. You go through death with somebody, with their families, and there’s an intimacy that comes through that that is just incomparable.

ABERNETHY: In his 30-some books, one of Peterson’s themes is that there is no way pastors can develop one-on-one relationships with their people if their churches have more than about 500 members.

ABERNETHY: So Peterson deplores megachurches. He thinks they are too big for pastors and worshipers to have close relationships with each other. 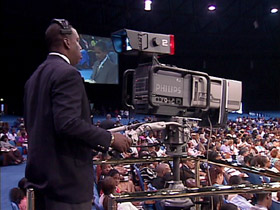 PETERSON: What’s so bad about it is that they don’t have to live responsibly. When you are part of a megachurch you have no responsibility to anybody else.

ABERNETHY: But, obviously, aren’t megachurches what many people want?

ABERNETHY: Not surprisingly, Peterson also condemns the so-called prosperity gospel—preaching that if people follow Jesus, God will give them tangible rewards.

PETERSON: Well, I think it’s a lie. I think it’s just a downright rotten lie. It’s nowhere in Christian tradition, so how does this get going in our culture? It’s greed is what it is. It’s greed given a spiritual name: God will bless you. I want to ask these prosperity gospel people, do your people ever die? Do the people in your church ever die? What do you do when they die? Where’s the prosperity in that? I don’t have much patience with them, to tell you the truth, because I think they’re defrauding people.

ABERNETHY: I also asked Peterson what he thought of doing church online. 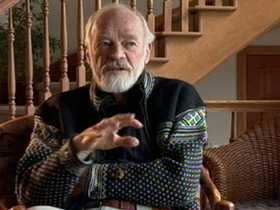 ABERNETHY: As Peterson compares life on Flathead Lake in Montana to life in the rest of the country, he does not like what he sees.

PETERSON: American culture is probably the least Christian culture that we’ve ever had because it is so materialistic and it’s so full of lies. The whole advertising world is just, it’s just intertwined with lies, appealing to the worst of the instincts we have. The problem is people have been treated as consumers for so long they don’t know any other way to live.

ABERNETHY: The antidote, for Peterson, is what pastors can teach.

PETERSON: Introduce them to a living Christ, a Christ who makes life livable in the terms in which you are living—that everything in the gospel is livable, not just true.

ABERNETHY: Although the mainline Protestant churches have lost millions of members, Peterson sees them as essential.

PETERSON: I think the mainline churches are the ones who are kind of holding things together while all this faddy stuff goes on.

ABERNETHY: I could not resist asking Peterson how he and his wife, as Christians, have dealt with the prosperity his books have brought them.

PETERSON: We give it all away. Our standard of living hasn’t changed, not a bit. We just—we know a lot of people we like to give it to.

ABERNETHY: In retirement Peterson seems content with his writing and his sense of place—of being, in his words, at home.

PETERSON: What makes me sure of what I’m doing is that virtually everything that seems to me that I’ve believed I’ve been able to live.