BOB ABERNETHY, host: Ten years after 9/11, relations between Muslims and non-Muslims in the US remain complicated. In many areas, tensions have been on the rise. There has been sharp controversy surrounding a proposed Islamic center near Ground Zero, and according to pew, proposed mosques in 36 other locations have also encountered community resistance. There’s also been a growing debate over Islamic religious law or shariah. Measures to restrict or ban the use of shariah have been introduced in nearly two dozen states. Yet in other areas the last 10 years have brought a new spirit of dialogue and cooperation. Kim Lawton has our report.

KIM LAWTON, correspondent: As Muslims were observing Ramadan, an unlikely group gathered in Syracuse at the Islamic Society of Central New York mosque. Christian, Jewish, Buddhist, Hindu, and Bahai women joined their Muslim friends for the traditional iftar meal that breaks the daytime fast. The event was organized by Women Transcending Boundaries or WTB,  a grassroots group that started in the wake of the 9/11 attacks. These women didn’t know each other ten years ago, and they admit they probably still wouldn’t. But 9/11 changed everything. 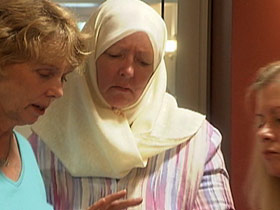 DANYA WELLMON (Cofounder, WTB): WTB took a negative, you know, a really tragic, tragic situation and made something positive from it.

BETSY WIGGINS (Cofounder, WTB): The relationships with these women have enriched my life enormously, have expanded my view of the world in a way that I would never have known before.

LAWTON: Experts say the attacks of 9/11 have had a dramatic impact on interfaith relations in America. But that impact has been felt in complicated and sometimes contradictory ways. On one hand, there has been an unprecedented wave of new interfaith activities, with Muslims playing key roles. At the same time, however, there’s been a growing wave of religious division and public distrust of Muslims.

PROFESSOR SCOTT APPLEBY (University of Notre Dame): The attacks on the World Trade Center and the Pentagon and the repercussions of that trauma put Islam front and center for everyone, everyone in the religious world, and so without 9/11 we would not have had to confront Islam, frankly.

LAWTON: Scott Appleby is director of the Kroc Institute for International Peace Studies at the University of Notre Dame.

APPLEBY:  There developed a variety of initiatives around the country, interfaith dialogue groups meeting together in parishes or in synagogues or in mosques. 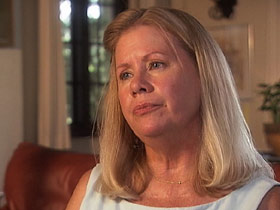 LAWTON: In Syracuse, Betsy Wiggins says she feels like she was living in a bubble before 9/11. She was raised Presbyterian and attends a United Methodist church. After the 9/11 attacks, she was disturbed by reports of a backlash against local Muslim women. Betsy’s husband, Jim, had been active in interfaith efforts. At his encouragement, she called the imam at the local mosque.

WIGGINS: And I said, “I am ignorant about Islam, far more ignorant than I want to be, and I want to do something, and I’m especially concerned about Muslim women. Can you tell me someone I can talk to?”

LAWTON: The imam put her in touch with Danya Wellmon.  Wellmon had grown up Methodist, but after a time of spiritual searching converted to Islam in 1992. She says the days after 9/11 were difficult for members of her mosque.

WELLMON:  We did get the phone calls, the harassment. Many Muslim families kept their children home from school, you know, there was the name calling. I know myself, I was run off the road one time and called a terrorist, and it was very scary.

LAWTON: Wellmon says she was surprised but pleased to get Wiggins’s call.

WELLMON: Oh, gosh, we talked for hours on the phone, and then she invited me to her house for coffee to, you know, carry on, to carry on this conversation. 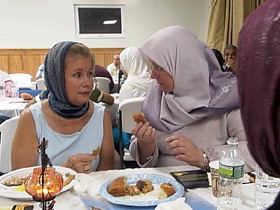 WIGGINS:  She parked right outside there, and she sat in the car for a while, and I could see that she was anxious. She had never met me before, so I went outside, and I just extended my hand and I said, “Please come in,” and she took my hand.

LAWTON: The conversation in Wiggins’s breakfast nook also went on for hours.

WELLMON: We both decided, gee, this conversation really should go beyond the both of us.

LAWTON: They each invited nine friends to join them at Wiggins’s house two weeks later. Two weeks after that, 40 women came, and they knew they had struck a chord. They decided to formalize the group and called it Women Transcending Boundaries. Today, there are more than 500 women on WTB’s listserve. They learn about one another’s faith traditions through building relationships. The conversations are open and honest. The group uses what it calls a strict “ouch” policy.

WIGGINS: If anyone feels offended or hurt by anything they can just say, “Ouch,” and we stop and we say, “What is it?” And that person can say, “That really hurt my feelings.”

WELLMON: I think we provided that space and that venue for many women to have the opportunity to come together of different traditions and to really get to know one another. 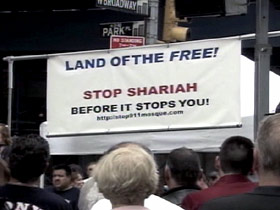 LAWTON: While the past decade may have brought new interfaith understanding, it has also brought expanded interfaith tensions.

APPLEBY:  Islam has taken the place of the Soviet Union as the next great enemy of the free world, and partly that’s understandable given Al Qaeda, given the threat of Islamic radicalism, the proliferation of jihadist movements. But, of course, those movements are a tiny minority of the 1.5 billion Muslims in the world.

LAWTON: Earlier this year, the House Committee on Homeland Security held a series of controversial hearings examining what it called “radicalization” in the American Muslim community.

LAWTON: High profile protests against a proposed Islamic center near the site of Ground Zero stoked tensions, as did widely-reported campaigns to burn Qurans. Meanwhile, more than 20 states have debated measures that would bar judges from considering shariah or Islamic law. The polarization has seeped into many local communities. In Nashville, Tennessee, Zainab Elberry is a Muslim activist who has been involved in interfaith work for more than 30 years. She says in the immediate aftermath of 9/11 she was heartened by the flood of support from the community. She received many invitations from religious groups that wanted to know more about her faith. 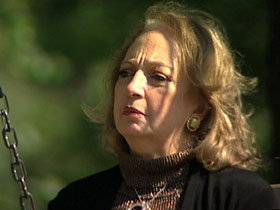 ZAINAB ELBERRY (Muslim Activist): By that time Islam was known to America with a bang, unfortunately, and at that point I tried my best to educate and to share information with as many people as possible.

LAWTON: She says interfaith relations were largely good. But then things began to change about two years ago. In several US communities, including her own, anti-Islamic groups began spreading a message alleging that Muslim extremists were plotting a stealth campaign to take over America.

ELBERRY: It was really disheartening. I was sad, and I really was a little scared, to be honest with you.

LAWTON: In the town of Mufreesboro, just outside Nashville, there were sustained protests and vandalism surrounding the proposed expansion of the Islamic center. Tennessee legislators debated a measure that would have criminalized the practice of shariah, with some politicians even questioning whether Islam should be considered a religion.

ELBERRY: We are Muslims, but we are also part of the community. It could be me today. It could be another denomination or another tomorrow. We cannot to allow that to continue.

LAWTON: Appleby blames the media for helping to foment a negative atmosphere.

APPLEBY: There’s a general climate that’s sour in our country, and many people have recognized it, and of course interfaith dialogue, constructive relationship between Christians and Muslims—that suffers in a climate like this. 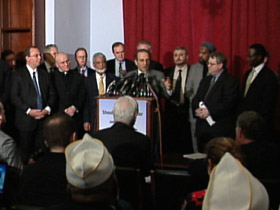 LAWTON: Yet, in some cases, the challenges have generated new interfaith projects. In response to the King hearings, a broad coalition of top religious leaders formed a new initiative called “Shoulder to Shoulder,” which they said would promote tolerance. In Syracuse, Women Transcending Boundaries is trying to put dialogue into action. WTB has gotten involved in a host of service projects, such as a community garden for refugee women. On this day, women from Bhutan were picking fresh vegetables to feed their families.

SARO KUMAR (WTB Member): We don’t speak their language, but from our smiles, our reaching out to them, they feel welcome.

LAWTON: Last year around the anniversary of 9/11, WTB organized a weekend of service projects around the area.  They called it “Acts of Kindness” or A-OK! Weekend. This year, they’re working with several community groups for an even bigger A-OK! event.

WELLMON: We have so much more that we can build here, something positive, than to, you know, stay focused on what divides us.

LAWTON: And they believe that should be the ultimate message of 9/11.