KIM LAWTON, correspondent:  Did you hear the one about the funny saint?  Probably not.

REV. JAMES MARTIN, S.J., author, Between Heaven and Mirth (in speech):  In the third century, St. Lawrence was burned to death on a gridiron over hot coals called out to his executioners, “Turn me over and take a bite, I’m done on this side.” In Latin. Or St. Augustine who famously prayed, “Lord give me chastity…but not yet.”

LAWTON: Father James Martin says humor is an underappreciated value in the spiritual life.  Martin has written a new book called Between Heaven and Mirth.  He says humor, laughter and joy are essential elements of spiritual health.

MARTIN: If you’re not finding joy in your faith, there’s something wrong with the way you are looking at your faith. And humor keeps us human, basically, brings us down to earth and reminds us that we’re not God.

LAWTON: Martin says all too often, joy has a “disreputable reputation” in religious circles.

MARTIN (in speech):  Have you ever been to Mass where the priest says (in boring voice) “And so we join with choirs of angels and their unending hymn of praise, holy, holy, holy Lord?” And you think, if that’s the way the choirs of angels are singing their praise we are in big trouble. (laughter) 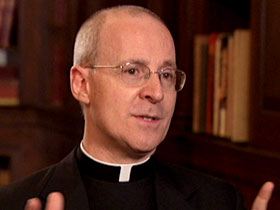 MARTIN: I think there’s a fundamental misunderstanding that says that religion needs to be serious all the time and gloomy and dour.  A lot of things about religion are serious—it’s concerned about your salvation, the afterlife, suffering, those kinds of things. But I think that we tend to focus so much on that to the exclusion of joy.

LAWTON: Part of the problem in the Christian world, Martin says, is a distorted view of Jesus.

MARTIN: We focus a lot of the Passion and death of Jesus, which is certainly very important, sometimes to the exclusion of the rest of his ministry, which was, you know, much more extensive and much of his ministry had to do with joyful things:  Table fellowship, visiting friends, those kinds of things, so I think we need to just have a little more balance.

LAWTON: According to Bible scholars, many of the parables Jesus told were probably considered pretty hilarious.

MARTIN: Well the idea that someone has a plank in their eye and another person has a speck of dust in theirs would have been funny to somebody. The problem is that because we’re so far away from that culture and that time, we don’t get some of the humor.  But for people in first century Palestine the parables would have been laugh-out-loud funny.

LAWTON: Martin says he gets frustrated that in so many churches, the images of Jesus and the saints have serious, anguished or sometimes even angry expressions. 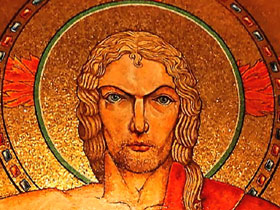 MARTIN: If we think of Jesus as a grumpy person and the saints as gloomy people, then it’s going to affect what we think that the sort of model Christian should be, which is grumpy. And I think that’s a real mistake.

MARTIN: His most famous joke came when a journalist innocently asked him, ‘Your Holiness, how many people work in the Vatican?’  And he said, ‘Ah, about half of them.’

LAWTON: Or John Paul the Second, who was known for his sense of humor, even in his last days.

MARTIN: Archbishop Timothy Dolan of New York recently told me that he was once visiting Pope John Paul during the end of John Paul’s life and to sort of buck his spirits up, Archbishop Dolan, who was then the archbishop of Milwaukee went to John Paul and Dolan is a very big guy and said, ‘Your Holiness, I’m happy to report that the archdiocese of Milwaukee is growing.’  And John Paul said, ‘So is the archbishop!’

LAWTON: Martin says humor has played an important role in his own spiritual life.

MARTIN: I think sometimes that the funny or wonderful or unexpected things that happen to me that make me laugh at myself might just be signs of God’s playfulness.  I can’t speak for God, but sometimes when I’m brought up short or find myself laughing at myself, I think, hey, maybe this is God saying, ‘you know, don’t take yourself so seriously.’ 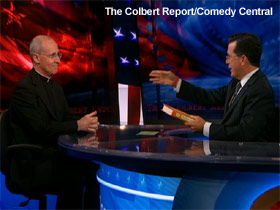 COLBERT(on show):  He wasn’t poor.  I mean, he may not have had much, but he was like, you know, one of those hobo hipsters or a trustafarian, you know?  You know his dad is loaded.  He was just choosing to be poor.

LAWTON: What’s that been like for you to be on that show?

LAWTON: He believes it’s a wonderful place for a Catholic priest to be.

MARTIN: Even if I’m only on for two or three minutes, I probably reach more people than I do in a year’s worth of homilies or even in all of my books.

LAWTON: Humor and joy, he says, are great means of evangelism.

MARTIN: Why would anyone want to join a group of miserable people? Joy shows not only that you believe in God but that you’re happy in your faith.

LAWTON: Martin cautions that there is bad humor, which mocks people or even worse, people’s beliefs.  And especially when it comes to religion, some can be very sensitive.

MARTIN: There’s a difference between making fun of God and just being silly about the way that we relate to God, which are two different things.  I always say err on the side of safety. If you think something might be offensive to someone don’t say it.

LAWTON: As a Jesuit priest, Martin says he often makes jokes about Jesuits because people know that underneath the humor is love and commitment.

MARTIN: A guy goes to a Franciscan church, knocks on the door, a Franciscan opens, the guy says, “Will you say a rosary for me for my intention?” Franciscan says “Sure, what’s your intention?”  Guy says, “I want a Lexus.” And the Franciscan says, “What’s a Lexus?” And the guy says, “Well forget it, I’ll go to another church.”  Goes to the Jesuit church, knocks on the door, a Jesuit opens up and he says, “Father before I ask you something, can you tell me, do you know what a Lexus is?”  And the Jesuit says “Sure, top of the line car. A lot of my parishioners drive it.”  He says “I want one.”  Jesuit says, “I don’t blame you.”  He says, “Will you say a rosary that I get one?”  The Jesuit says, “Sure…what’s a rosary?”

LAWTON: Martin says joy is something different, something deeper than happiness.  Being joyful, he says, doesn’t mean being happy all the time.  Gratitude can help move people toward joy.

MARTIN: Frequently we’re so focused on the negative things in life, you know, of which there are many, that it moves us away from being grateful for that which we have so, a roof over our heads, food, clean water, those kinds of things, if you can ground yourself in gratitude, it usually reminds you of the blessings you have in life and it usually can connect you more with God, which brings a sense of joy.

LAWTON: And a little laughter doesn’t hurt either.