LUCKY SEVERSON, correspondent: Ray Kurzweil may not be a household name, but the blind know who he is. He invented the first reading machine and then reduced its size to a hand-held gadget. Kurzweil will be remembered more as a man on a mission to tell the world what life will be like in the age of technology. Microsoft billionaire Bill Gates said he is the best in the world at predicting the future, and what a world he predicts. 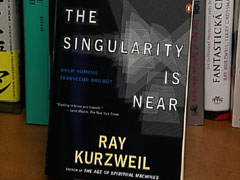 SEVERSON: Kurzweil has written several books. One of the most recent, called “The Singularity Is Near,” predicts that by the year 2050 nonbiological artificial intelligence will surpass human intelligence, creating a hybrid of man and technology.

KURZWEIL: What I am predicting is that we will have machines—we are going to need a different word because these are not like the machines we are used to. These are going to be machines that will seem as human, as real, as conscious, as any actual human being.

SEVERSON: Even if nonbiological or artificial intelligence created in places like MIT is not as close to “singularity” or matching human intelligence, as Kurzweil believes, it’s close enough that scientists and ethicists are now saying we need to take a serious look at its ramifications. Professor Christian Brugger is a bioethicist at Saint John Vianney Theological Seminary in Denver. Brugger disagrees with Kurzweil that humans can ever come close to perfection with technology.

PROFESSOR CHRISTIAN BRUGGER (Saint. John Vianney Theological Seminary): I don’t think that the technology is the problem. What I have concerns about is the philosophy that stands behind it, the idea that somehow we are going to be able to overcome human limitation or we’re going to overcome death.

SEVERSON: What troubles Brugger the most is the notion that technology will one day replace God. 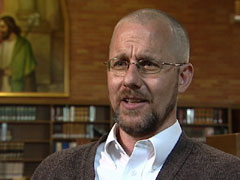 SEVERSON: Kurzweil bases his predictions on what he calls the exponential growth of artificial intelligence in the fields of genetics, nanotechnology, and robotics.

KURZWEIL: Informational technology is growing exponentially, not linearly. Our intuition says it grows like this: 1, 2, 3, 4, 5—thirty steps later you’re at 30. The reality is that it grows 2, 4, 8, 16, and 30 steps later you are at billion.

(giving a speech): When I was a student at MIT, I went there because it was so advanced at that time it actually had a computer, and it costs tens of millions of dollars. It took up half a building. The computer that I carry around and that we all carry around is a million times less expensive. It’s a thousand times more powerful.

SEVERSON: John Donoghue is a professor of neuroscience and engineering and director of the Brown University Institute for Brain Science. He says his work has not progressed exponentially. But in only 10 years he’s been able to implant sensors in the brains of paralyzed patients enabling them to operate a computer, type, run a robotic limb simply by thinking, sending out brain signals. 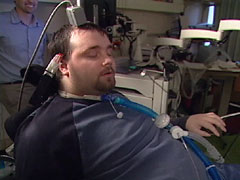 PROFESSOR JOHN DONOGHUE: The value of the technology is first for people who are severely paralyzed. The first step is to give them any control at all. They can’t do anything without help from someone else. People want and feel some sense of pride in taking care of themselves so anything we can restore is a great step.

SEVERSON: Neuroscience has yielded other life altering advances. For instance, there are now over 75,000 Parkinson patients worldwide who’ve had tiny electrodes implanted in their brains. Doctors say the operation significantly reduces tremors and allows patients to rely less on medications.

KURZWEIL: By the way, nobody is picketing, protesting, oh, people putting computers in their brains—that that is somehow unnatural or defies the way things should be.

SEVERSON: Bioethicist Brugger worries that science will soon cross the line to where brain implants will not simply heal patients, but enhance their ability to think and compete.

BRUGGER: If we move in this direction of radical human enhancement, are we going to develop those who are and those who aren’t? The enhanced and the unenhanced? I mean, Lord, we can’t even find the money to get everyone braces who needs braces. 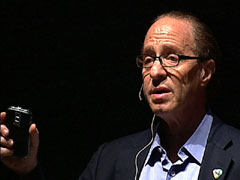 COLIN ANGLE (CEO of iRobot): A lot of people worry about one day there will be a knock on the door, and there will be a robot, and you would say where did that come from? And I will tell you that the future is going to be much stranger.

SEVERSON: Colin Angle is the cofounder and CEO of iRobot, better known as the creator of the Roomba, the floor cleaning robot or the PackBot robot used to disarm roadside bombs in Iraq and Afghanistan, and soon to be released—robots that can keep track of grandma and remind her when it’s time to take her meds.

SEVERSON: Angle doesn’t believe robots will ever replace humans, but he says notwithstanding the science fiction stories of robots run amok, society needs them. 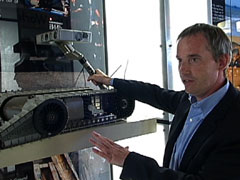 ANGLE: Throughout history there are many different situations where technology exists and can be used for good or evil, and I think that as robots become more capable we need to be careful about using robots to help society.

DONOGHUE: The classic scary story is “The Matrix,” of course, where you plug in and you live in this other reality.

SEVERSON: The reality where computers take over the world:

(from the movie “The Matrix”): “We marveled at our own magnificence as we gave birth to AI.” “AI? You mean artificial intelligence?” “A singular consciousness that spawned an entire race of machines. We don’t know who struck first, us or them.”

SEVERSON: Kurzweil himself worries about technology falling into the wrong hands.

KURZWEIL: The same technologies that are being used to reprogram biology away from heart disease and cancer, presumably good things, could be deployed by a bioterrorist to reprogram a biological virus to be more destructive, and that’s actually a specter that exists right now.

SEVERSON: He says he’s working with the military to develop a system to detect rogue viruses, something like the virus protection found in today’s computer software. But he sees the good society can gain from artificial intelligence far outweighing the bad. 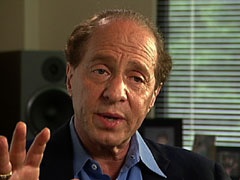 KURZWEIL: That was the family religion. It was personalized: You, Ray, can find the ideas that will change the world.

SEVERSON: Kurzweil has patented over two dozen inventions, including the first music synthesizer, which he sold to Stevie Wonder. President Clinton awarded him the National Medal of Technology, and few have more faith in technology than Ray Kurzweil.

KURZWEIL: Computers are already better than humans at logical thinking. It is our emotional intelligence, the ability to be funny, to get the joke—that is the cutting edge of human intelligence. That’s the most sophisticated, complicated thing we do, and that’s exactly the heart of my prediction that these computers will match us in emotional intelligence, which includes our whole moral system.

BRUGGER: I don’t think that will ever be reached because now we are dealing in the realm of the spirit. If the entire realm of the spirit that has been spoken about in the history of poetry and literature and philosophy and theology is reducible to electrical synapse, then we can reproduce it eventually in a machine, because electricity is at the basis of the machine. I deny that premise. I think that there is more to human beings than reducible to measurable stimuli, and in that regard I don’t think that machines are ever going to be able to be human.

SEVERSON: Undaunted by his critics and skeptics, Kurzweil is so convinced that artificial intelligence will one day enable man to live forever he is doing everything he can to be around when it happens.

SONYA KURZWEIL (making a toast): Well, here’s to living forever. That’s not just a salutation in our family.

SEVERSON: Kurzweil is so determined to live “indefinitely.” He takes as many as 200 supplements each day, says this regimen made it possible to reverse both his diabetes and his age. His most recent full-blown checkup results show he has the body and mind of a 40-year-old. Kurzweil is 62 and striving for immortality.