BOB ABERNETHY, host: Familiar social issues led the religion news this week. In Washington, the Obama administration made a significant change in its policy on insurance coverage of contraception by religiously affiliated organizations. Any employer with a religious objection will not be required to offer or pay for contraceptive services but insurance companies would have to offer those services to women free of charge. This change follows a huge controversy over the administrations original plan which US Catholic bishops and several other religious groups said would have violated their constitutionally-guaranteed religious freedom. Republican candidates for president also weighed in on the controversy. Mitt Romney became the latest GOP candidate to accuse the president of waging “an assault on religion”. Newt Gingrich and Rick Santorum have launched similar attacks. On Tuesday, support from religious and social conservatives helped Santorum win the Missouri primary and caucuses in Minnesota and Colorado. Following those victories, Santorum traveled to Texas where he spoke to more than 100 Christian ministers about his Catholic faith.

We want to explore the contraception debate further. Kim Lawton our managing editor has been following the issue which produced for many people Kim, as you know, this terrible bind between having to obey the law on the one hand or follow their churches’ teachings and their own consciences on the other. 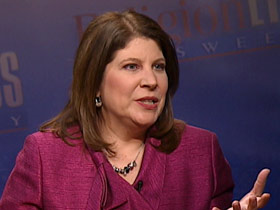 KIM LAWTON (Managing Editor): Well, that’s what the big debate was. The original policy allowed exemptions for most churches, but for these religiously affiliated institutions like hospitals or Catholic universities or charitable organizations—they felt like they were being forced to pay for something that their church says is wrong, and so they did feel that there was this bind, which is why there was this outcry.

ABERNETHY: And so what does the compromise say?

ABERNETHY: They also called it a public health issue.

LAWTON: Yes, and they say that, you know, they want women to have access to these contraceptive services as a matter of public health, so now the insurance companies will directly offer those to the employees, and the religiously affiliated institutions won’t have to provide those or pay for it.

LAWTON: Or refer people to it. It would be the responsibility of the insurance company, and so, you know, this is their way of getting around it. There were a lot of people in the religious community, especially in the mainline Protestant community that said they supported the original mandate, but for, you know, some people, including moderate to liberal Catholics, they had a problem with it.

ABERNETHY: And so is it all solved now? Is everybody happy?

LAWTON: Well, there were a lot of hard feelings that were generated in all of this—and again this notion that the Obama administration is in some way at war with religion or at war with the Catholic Church. That was the slogan that was out there. As we’ve reported, a lot of the Republican candidates certainly jumped on that some might say, the president says, you know, cynically for political gain. That issue’s still out there. Is there some sort of, you know, growing secularism or attack on religious exercise in this country? And so I think the administration does have, you know, some repairing to do. A lot of moderate and liberal Catholics who supported this president, who supported the health care bill when it was going through Congress, they felt a little betrayed. I’m hearing from people who say, you know, yeah, the majority of Catholic women may use birth control, and yeah, a lot of people disagree maybe with the church’s policy, but this issue is bigger than that in their view. And so, you know, for them they were pleased that the administration made this compromise, but there was some damage that was done.

ABERNETHY: And we will be hearing more about this as the campaign goes on.

LAWTON: Well. certainly I think a lot of the Republicans aren’t going to let this go. They are going to keep at it. They see it as a good issue, a good issue to battle the president with.