KIM LAWTON, correspondent: On any given weekend, some 15,000 people worship with the evangelical Northland Church, but about a third of them never set foot in the building here in Longwood, Florida. They’re worshiping online via the Web and Facebook and Smartphones.

MARTY TAYLOR (Northland Church, Director of Media Design): We call ourselves a church distributed because we don’t want to be confined to this space. We want to be everywhere, every day, and technology is a great tool for us to be able to do that.

LAWTON: On site, worship leaders always welcome the online participants. On this Sunday that includes a small gathering at a nearby prison and people from as far away as Japan. As the main service progresses, online minister Nathan Clark connects with his virtual flock.

NATHAN CLARK (Northland Church, Online Minister): I provide pastoral care. I provide direction and really help them connect to other people around them as well, ultimately to connect them to God while they are in the worship environment. 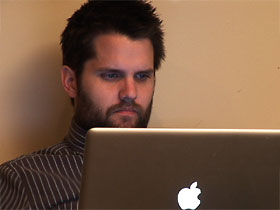 CLARK: For a long time I said, “I will pray for you right now,” and in 20 seconds later, “Okay, I’m done.” But I don’t think that has the punch. I type it all out, and I email all the prayers. A lot of people have told me that the prayers that we exchanged together they actually took and they printed out and carried them around with them afterwards, and it’s cool because it ended up giving that prayer shelf life far beyond what you and I would experience if we did it out loud.

LAWTON: With the explosion of online technologies and social media, religious institutions across the spectrum are finding more and more creative ways to connect with their members and reach out to new audiences. The Vatican, for example, has its own channel on YouTube, while the Dalai Lama tweets updates through Twitter. The innovations are providing new ministry opportunities, but some wonder if they are also changing fundamental beliefs and practices.

Northland Church and its prominent senior pastor, Joel Hunter, have been on the cutting edge of using new technologies, and they are helping others follow suit, especially churches in other parts of the world. Their online worshipers, they say, are demographically much like those who attend the main service. But the online ministry allows Northland to connect with people who wouldn’t have been comfortable attending a church. At the same time, Clark says Northland has created a worldwide church community.

CLARK: The relationships the Apostle Paul had that we see throughout the New Testament were often carried out by letter, and I don’t think there’s anything that substantially different than what we are doing here. 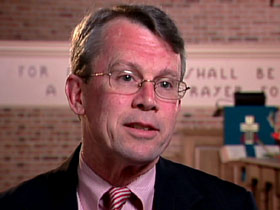 LAWTON: Still, some question the nature of a virtual religious community.

REV. HENRY BRINTON (Fairfax Presbyterian Church, Fairfax, VA): There’s a level of trust and support and accountability that you get in a face-to-face relationship with someone which I don’t think is possible online.

LAWTON: Reverend Henry Brinton of Fairfax Presbyterian Church in Virginia believes that, especially in the Christian tradition, there are limits to how much worship can really occur online.

BRINTON: There is something powerful about coming into a sanctuary and being with others. We still require that baptism be done with water and that communion be a community meal where real bread is consumed, where the fruit of the vine is received, and people do feel a very strong connection with God and with each other through those physical acts.

TAYLOR: Our goal is not for someone to log in and watch a service and, “Hey, I’m done.” We want them to be in community with other people where they meet together and have a meal together and go out and serve others together.

LAWTON: One way of doing that has been through Roku set-top boxes that enable people to watch Web-streamed video on their TVs. Northland created the first church channel on Roku, which allows people to gather in places from bars to prisons to homes to watch the live stream of the service. About 150 miles away from Northland Church, a small group gathers every Sunday to watch on Marcy and Ron Burth’s 53-inch TV. 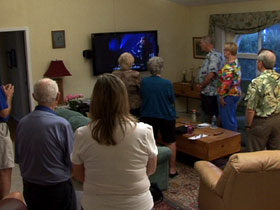 RON BURTH (Northland House Church): The main reason why we bought the big TV was for sports.

MARCY BURTH (Northland House Church): We were going to watch tennis, call the balls, be down on the football field. God had other plans.

LAWTON: The Burths hadn’t been able to find a church they liked in their own neighborhood, and they invited neighbors who weren’t part of a church either.

MARCY BURTH: We have a closeness that you don’t have when you’re in a large congregation, but we really do have the benefit of the live service coming into our home.

RON BURTH: It seems to be unorthodox, but yet it’s really the early church that did meet in homes initially.

LAWTON: Would you go back to a traditional church having been through all of this?

LAWTON: Outside Boston, the Daughters of St. Paul are also making active use of new technologies. Their order was founded almost a hundred years ago by an Italian priest who believed the media would have a profound impact on culture.

SISTER KATHRYN JAMES HERMES (Daughters of St. Paul): He said, “Look at the churches.” He said, “Where are the people? The people are not in the pews. Where are they?” So it’s our job to go out to wherever they are and make that place a church, a sanctuary, a place where they can meet God and God can meet them. 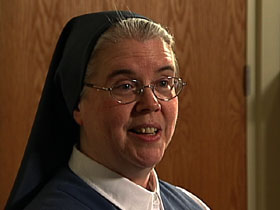 SISTER SUSAN JAMES HEADY (Daughters of St. Paul): Whereas maybe people before might have thought they had to go to church to do religion, they are doing it in the comfort of their home, having religious, theological discussions with their friends—maybe even a lot more fun because people like to get on their computer and go on Facebook.

LAWTON: Many of the sisters have blogs, Twitter accounts, and Facebook pages, and they have developed a series of mobile web apps, such as the Rosary App, that people can use on their Smartphones and iPads. Sister Sean Mayer is an administrator of the Facebook page for the award-winning Daughters of St. Paul choir. She says the tool allows them to interact with their fans almost instantaneously.

SISTER SEAN MAYER (Daughters of St. Paul): I try to put up something every two to three days. When we are actually recording or when we’re on the road, it’s every two or three minutes practically.

LAWTON: Their most active site is the “Ask a Catholic Nun” page on Facebook, which has more than 12,000 followers.

SISTER HEADY: The site was founded not to be a place for debates, but more for information so that people who have questions about the faith or who would like to connect with a sister and may not have the opportunity in their local parish could get on and ask a question.

LAWTON: People from all over the world ask questions about the Christian faith or Catholic Church teachings. Some ask for opinions about difficult relationships. Recently, there were some questions from Muslims trying to understand the concept of the Trinity. 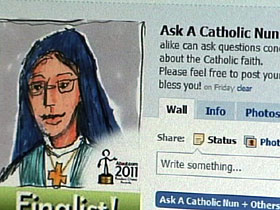 (speaking to Sister Heady): Are there sometimes you’re not sure what the right answer would be?

SISTER HEADY: Well, the good thing about Google is anything you want to know you can Google. So I have my reliable sources, the catechism of the Catholic Church. There’s certainly Scripture. There’s other reliable places that you can search out answers.

LAWTON: She recognizes the limitations and tries to direct people to a local priest or counselor, but this format, she says, also has its place.

SISTER HEADY: Sometimes people need to first venture into a safe place where they are unidentified, and they just connect with someone, and I consider it a blessing that they have connected with me and not some other kook that will lead them astray.

LAWTON: Pope Benedict XVI has encouraged the church to use social media, but he cautioned Catholics to make sure they are authentically representing the church online. Professor Stephen O’Leary at the University of Southern California’s Annenberg School for Communication says the grassroots character of social media does pose challenges to traditional religious authority structures.

PROFESSOR STEPHEN O’LEARY (Annenberg School for Communication, University of Southern California): In many cases, members of the congregation are acting as media producers and are functioning independently of their own local church. So the authorities from the church—pastor up the line to the denominational heads—no longer have the kind of control that they once did.

LAWTON: O’Leary likens social media to the invention of the printing press, which made the Bible and theological debate more accessible to everyone. This, he says, paved the way for the Protestant Reformation.

O’LEARY: It was the innovation which had changed everything and challenged the authority of the church in a way which was never possible before. I think that today’s media technologies, from the Internet to Twitter and all these things, are having a similar effect on the church.

LAWTON: O’Leary and other experts agree it’s still too soon to know what the ultimate impact of social media will be on religion. Still, many groups say there is no choice but to move forward.

SISTER HERMES: I think we have to have a little more faith in God, that somehow he knows what’s happening and that he himself, God himself, is actually using this means to bring some of his love and peace into the world.

LAWTON: And whatever the impact, there’s no going back.