LUCKY SEVERSON, correspondent: The Book of Matthew says it’s easier for a camel to go through the eye of a needle than for a rich man to get into heaven. Wayne Miller takes that scripture seriously.

WAYNE MILLER: I have a concern for these people when they go up, and I believe in a heaven and a non-heaven, when they go up there how are they going to explain, you know, what they’ve done with their money?

SEVERSON: Miller knows about money. He’s made enough of it. His little coin shop in downtown Helena, Montana has done more than $325 million in business since it opened 45 years ago. This is his son, Dave.

DAVE MILLER: Seriously, when they get any money their first thought is who can we bless? Who can we give this money to? I say that out of every $1,000 my dad gives $999 of it away without even thinking. 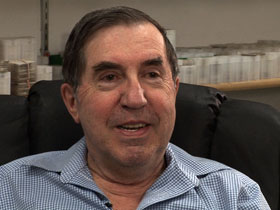 SEVERSON: Over the years, Miller has given away millions of dollars to charities all over the world, especially to the people of Helena. He knows that some have taken advantage of his and his wife’s generosity but says they would rather err on the side of love.

WAYNE MILLER: God doesn’t ask you about your ability or your inability. He asks you about your availability, and we happened to be available at a time when people were wanting to start a shelter.

SEVERSON: They called it God’s Love, and as homeless shelters go this one stands apart.

ANN MILLER: Unconditional love—you know, everybody talks about that, but what that means to us is that before they ever walk in the door the first time, we already love them. We don’t wait to see who they are or how they act or what their problem is or if they’re lazy. We already love them.

SEVERSON: Joe Wojton, one of God’s Love managers, has worked in other shelters around the country.

JOE WOJTON: Everybody who comes through our door are people with problems, not problem people, and we treat everybody with love when they come through our door because we realize the people we’re seeing—some have never been homeless before. This is a very scary experience, and we try to love them up the best we can. 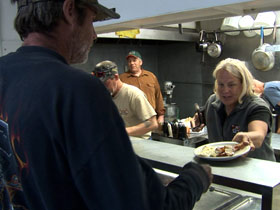 SEVERSON: The shelter usually accommodates about 40 homeless downstairs and has rooms for nine families upstairs. But most of the people they feed here are not homeless. They have jobs and live in the community.

DAVE MILLER: People rely on us in the middle of the month to eat down here. They know the food stamps and the food boxes are only going to make it a couple of weeks, so they rely on us to come down, on their ability to come down and eat.

ANN MILLER: It doesn’t take a lot of misfortune to be on the street these days. I think everybody in America knows that right now.

SEVERSON: Dave Miller runs God’s Love and gives 10 percent of his salary back to the shelter.

DAVE MILLER: Yeah, we’ve seen a big change. Every day we have families that come in and say, “My husband had a great job making a lot of money. He got laid off. We can’t make next month’s rent.” Unfortunately, it used to be just couples. Now we’re seeing them with children.

SEVERSON: People like John and Krista Loweman, who is pregnant. Both were employed in South Carolina until they lost their jobs and came west looking for work and landed here. 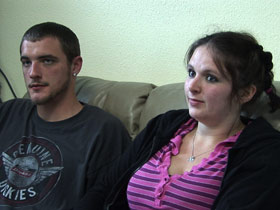 (speaking to John Loweman): So you came here looking for work?

JOHN LOWEMAN: Yes, looking for work, anything, just a better life for me,my wife and my baby.

SEVERSON: But there was no jobs?

KRISTA LOWEMAN: Nothing, not even for me, and I’ve been to school.

ANN MILLER: We tell them that they can have three days no questions asked, just rest, eat, do their laundry, but after that they have to have a plan, and their plan usually is to find a job. But they can’t find a job.

SEVERSON: But if they can’t find a job, it doesn’t mean they have to leave, as long as they keep looking.

JOHN LOWEMAN: You have to put in five applications a day at least, and I do that every day but, you know, it’s kind of hard.

KRISTA LOWEMAN: It’s better than living in a car, though.

SEVERSON: Better than living in a car. You lived in a car for how long? 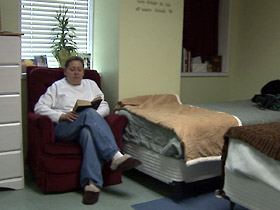 SEVERSON: Darcy Pfeiffer and her husband and baby boy live here. He works but can’t afford the rent. Brenda Rutecki’s husband died a year ago. She had no income, couldn’t get a job, came here while she attended school to become a certified nursing assistant.

SEVERSON: One of the first things the Millers did was create a park next door to God’s Love just for the homeless. Having a homeless shelter and a park near the center of town was not exactly pleasing to local businessmen. But Toby DeWolf, owner of Bert and Ernies, says any opposition has faded away.

TOBY DEWOLF: I’ve been here 25 years, and I have never seen a better run shelter. I don’t think there’s a problem. I don’t think that anybody has seen an issue with any kind of violence or crime or anything by any means with having a shelter down here.

SEVERSON: The Millers both graduated from Catholic University in Washington, DC with master’s degrees. They have nine children, four of them adopted, and all of them, according to their father, are involved in one charity or another. There was a time when Wayne Miller, who is an expert on silver dollars, was measuring his life by the increasing value of his personal coin collection. 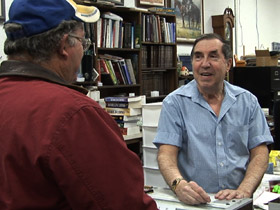 WAYNE MILLER: You know, I open up these catalogs, and they’ve got coins there, $30,000 or $40,000, $50,000 coins that I would dearly love to have, and I look at them and I say okay, I chose my path. If I did that I would be obsessed with that, and again, my whole measurement would be how advanced is your coin collection? And I didn’t want that to be.

SEVERSON: It doesn’t mean the Millers live in poverty. They travel, eat in the best restaurants, live in a very nice home with a swimming pool, but customers often wonder how successful a man can be if he rarely wears shoes.

SEVERSON: He provides the bulk of the funding for God’s Love, millions of dollars over the years, but the shelter also receives a federal grant, money from the United Way and from other private donors.

WOJTON: It’s amazing when I go out to a church or to the local college, and I speak, and I hear from people, and they say, “Oh, we just thought the Millers pay for everything,” and that’s not the case. Wayne and Ann are wonderful, and Wayne donates a lot of money to God’s Love, but we need the entire community effort to keep God’s Love up and operating every year.

ANN MILLER: And I think over the years we’ve learned to love God more and more, and he’s always been there for us. When we were thinking that maybe we weren’t going to have enough money or whatever, he’s always supplied it. It’s been wonderful—abundance, just like the Bible says.

SEVERSON: The Millers are also helping in various ways about 150 Helena families who don’t live in the shelter. Altogether, he gives away about one-third of his gross income and is firmly convinced that it’s what God wanted him to do.

SEVERSON: The truth is he’s having a pretty good time right now.