KIM LAWTON, guest host: Now, more on religion and politics with Kevin Eckstrom, editor in chief of Religion News Service. Kevin, we’ve seen since the very beginning of this primary season that Mitt Romney has consistently done best among the Catholic voters in contrast to Rick Santorum, who is Catholic, and this really helped him out of course last week in Ohio, where about a third of the Republican voters were Catholics, and he got the majority of them and that helped him win. Why do you think that Catholics are really gravitating toward Romney as opposed to Santorum?

KEVIN ECKSTROM (Editor-in-Chief, Religion News Service): Well, I think it’s because Rick Santorum is sort of a very particular kind of Catholic that is a bit actually outside the mainstream of the American Catholic church. You know, the surveys indicate that the American Catholic church, or the American Catholics don’t buy the line that the contraception mandate, for example, is an attack on religious freedom, which is what Rick Santorum and the bishops have been saying. They don’t buy that. Americans Catholics by and large use contraception. Rick Santorum thinks it’s a moral evil, and so there is a disconnect. He is a particular kind of Catholic that I think is a little bit out step with the mainstream, rank-and-file Catholic church, and so I think when they look to him, a lot of them don’t see themselves in him, and a lot of people actually don’t even know that he’s Catholic. Most people assume he’s an evangelical.

LAWTON: And he also generated controversy when he criticized John F. Kennedy’s speech where he talked about the separation of church and state, and Santorum was very critical of that. He said that speech shows a philosophy that wants to keep religion out the public square. He wants to have more religion in the public square of all stripes, he says, and that also affected perhaps some of the Catholic views of him. 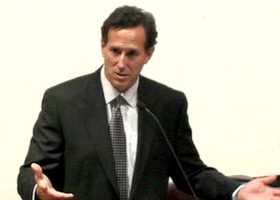 EKSTROM: Right. Again, you know, there are Rick Santorum Catholics and John F. Kennedy Catholics, and I think most Catholics, when they look at the two, they sort of identify with John F. Kennedy. They are fine with the separation of church and state. They actually think it’s a good thing. Rick Santorum thinks it’s kind of a bad thing. But what you see, I think, is Rick Santorum in a lot of ways is the Tea Party candidate in this race. I mean, he’s talking about issues of freedom and liberty and big, aggressive government, and that’s really not in line where most Catholics are, sort of the rank and file. They’re just of a different stripe, and so he’s going after the base of the party, and that’s really not where the Catholics are.

LAWTON: Rick Santorum has done extremely well among evangelicals. Of course, there are evangelicals who do support Mitt Romney, but by and large Santorum’s been getting the majority of those votes and especially in states where there are a large number of evangelicals. That’s made a big difference for him. We have a couple states coming up, Mississippi, Alabama, where that may be a factor for Santorum.

ECKSTROM: Right, and in a place like Tennessee, which Rick Santorum won, I mean, he won the evangelical vote decisively, and the thing to watch, I think, in the Southern primaries coming up, in Alabama and Mississippi, is how well he does among evangelicals and how well Newt Gingrich, who also has strong appeal among some evangelicals, how they do. And one of them is going to get that vote and I think if Santorum gets it, I think Newt Gingrich is pretty much done. But, you know, one of them is going to be the evangelical candidate, because clearly Mitt Romney is not, and I think the next coming week will tell us who that’s going to be.

LAWTON: And, of course, there’s been a lot of jockeying already, everybody calling on the other one to get out of the race, saying that if it were more of a two-man race that perhaps it would be a more interesting competition.

ECKSTROM: Right, and I think, as we’ve talked about, Newt Gingrich really has two roles he can play here. He can be a kingmaker and step aside and throw his support behind one candidate or the other. Or he can be a spoiler and prohibit, you know, drag out this contest among conservatives even longer.