Teacher (speaking to students): So I want about four people per bench. Go. Grab your journals.

JUDY VALENTE, correspondent: These boys, grades six through eight, are having fun examining mollusks and worms in a typical science class. The school they attend is anything but typical, however. There are only 40 students here—all boys—and though they study the usual subjects, these boys are here for something more. This is the Boston Archdiocesan Choir School. Boys come here to sing. Music is so important that this place has been described not as a school with a choir, but as a choir with a school. The music director is John Robinson.

VALENTE: Robinson, now 29, is the product of a famous choir school in England, where boys’ choirs have long been a part of the Anglican tradition. 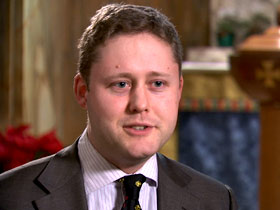 ROBINSON: In England where I’m from, the choir schools began perhaps in the seventh century. Initially, the monks would have been singing chant, all on one note, and as the history of music progressed they started to sing in more than one part. They needed the boys to sing higher parts. The unique sound of a boys’ choir is particularly fascinating to work with, because we know it’s the sound that composers had in their ears when they were conceiving much of the music.

VALENTE: Boys’ choirs were never a large part of the Catholic tradition in the U.S., but in 1963 the choirmaster at St. Paul’s Church in Cambridge, Massachusetts established a choir school to help preserve and promote sacred classical music in the U.S. Today, the St. Paul Boys Choir is the only one of its kind in the country. There are no other Catholic choir schools. The reasons: changing tastes in music, the costs of training the boys, and the trend toward boy-girl choirs. Here, daily rehearsals start each morning before 8:00.

ROBINSON: At that first rehearsal, I’ll do some exercises to warm up different parts of their voices.

(to the boys) Okay, let’s get the lips warmed up.

ROBINSON: We do arpeggios with funny words. “My car has flat tires” is one that we often do.

VALENTE: The boys, most of whom are Catholic, must learn to sight-read hundreds of pieces of music. 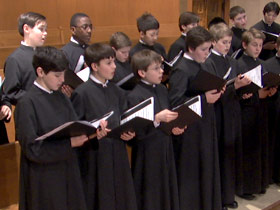 ROBINSON: The boys sing music right from the word “go” in music history. They sing classical music as well as the music by Mozart, Hayden, Mass settings by those composers, and into the Romantic period with motet–Bruckner, Mendelssohn, Romantic composers, and then into the modern day as well.
Piano Teacher: Good. Let’s just try the right hand alone from here, okay?

VALENTE: Each student is also required to learn to play the piano. Some learn other instruments as well. Alex Pattavina, a tenth-grader, learned to play the organ when he was at the choir school and now plays at a Sunday Mass here.

ROBINSON (speaking to choir): It’s a lovely sound, but it’s just very unclear, the words “I cry out “Praised be the Lord.”

VALENTE: The rigorous curriculum makes recruiting a challenge. To find boys who can sing like this, Robinson visits dozens of schools in the Boston area, auditioning third and fourth graders.

ROBINSON: We’d sing a song, maybe “Happy Birthday” or the National Anthem or something like that, and then test them each individually, just very briefly and very positively, to see whether they have that ability to match pitch. When we say “matching pitch” with a boy we mean that we play or sing a note to a boy and we see if he can sing that note back to us accurately. The one word that defines what we’re looking for is “potential”—that we don’t expect to find boys who can already do all the things that we’re going to teach.

AIDAN LEWIS (Chorister): When I was in the fourth grade, I tried out for a play, and it had a singing part in it, and my music teacher said that I had an amazing voice, and she told my mom about this school, and she sent me here, and then when I came here I started to realize I had a good voice.

VALENTE: The school’s $5,000 annual tuition doesn’t cover the cost of educating the boys. The difference is made up through donations and money the choir earns from what are called “working scholarships,” that is, public performances like this one at Fenway Park. The have also sung at weddings and at funerals, including those of Rose Kennedy and Tip O’Neill. They sing at Masses six days a week. But some boys may have to drop out of the choir before they graduate. 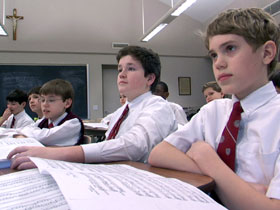 ROBINSON: Boys’ voices are going to change, and there’s very little that can be done about that. For many boys it really is no man’s land vocally, and the sound that they can produce is unpredictable and sometimes embarrassing, so we just have to be very kind to them when that day comes because, of course, it’s quite shocking that suddenly their whole life for the last four years as they’ve known it singing these beautiful treble parts is no longer happening in that way.

VALENTE: Those whose voices have changed can sometimes continue with the choir, learning to sing in falsetto. Others will serve as altar boys or ushers or will sit with the congregation, singing to encourage those around them.

ROBINSON: When I’m conducting the choir so many things are going through my mind. You’re thinking about the effect it’s having on the people listening. Sometimes their concentration will wander. They’ll start to do something they shouldn’t be doing. You have to wave at them and that kind of thing, and that can be very distracting to a performance, so you’re constantly trying to train those things out of them and get them purely to focus on singing.

VALENTE: How do you impart a love of this difficult music to these very young boys?

ROBINSON: They come to it, and they find something intrinsically beautiful about it, and other times they don’t really get it, and then my job’s harder to try and show them what’s good about it or what’s interesting about it, and different boys react in so many different ways. Sometimes they learn from each other. You’ll get one boy who loves it, and other people catch on when they see that he loves it. 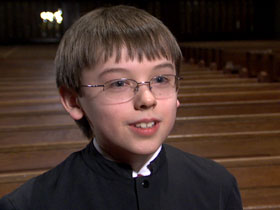 FORREST EIMOLD (Chorister): It’s one thing to sing or play a piece by somebody, like let’s say Mozart, and you can definitely express emotion in that, but it’s another thing entirely to be able to express your own emotions and to write exactly what you want.

EIMOLD: I’ve composed many works for piano. I recently finished my second piano sonata. I’m currently working on a Mass for the choir school to sing, actually. And I’ve done some other short pieces.

VALENTE: At High Mass on Sunday morning, the boys sing with the men.

ROBINSON: When the boys sing with the men of the choir on a Sunday morning, the dynamic is rather different. If they hear professional adult singers singing, they’re far more likely to imitate something which is good like that and to learn from the way that the adults around them are singing, so I think it’s a very positive dynamic.

REV. MICHAEL DREA (Pastor, St. Paul Parish): That music that the boys provide can be such a source of inspiration to Catholics as well as those who are searching to better understand who God is and to come to a greater knowledge and appreciation of the many gifts and graces that God bestows on individuals.

ROBINSON: I think the boys get an absolutely unique experience, because they’re learning confidence to sing in front of people from an early age. One of the most satisfying things of all is to see a boy who doesn’t realize he has potential and talent coming into the school in the fifth grade or the fourth grade and leaving three or four years later having learned so many skills that he would never even have imagined he could have learned when he first came in, and seeing that confidence grow is a wonderful thing.

VALENTE: For Religion & Ethics NewsWeekly, this is Judy Valente in Cambridge, Massachusetts.