FRED DE SAM LAZARO, correspondent: It looks more like a theme park than a school, and it’s not just the location. In one of Thailand’s most impoverished regions that’s unusual. The buildings are built of bamboo, a fast-growing, renewable resource, including a geodesic dome.

MECHAI VIRAVAIDYA: Well, just to show that you can do things people don’t normally think can be done, such as getting underprivileged kids to be at the top of the scale of many, many things, of being good, being decent.

DE SAM LAZARO: The Mechai Pattana School is the cornerstone of an idea to attack rural poverty and stereotypes and to instill a new kind of learning.

MECHAI: This is our sex education wheel.

MECHAI (spinning the wheel): Green is a safe color, of course. Aha! Oh, aha! HIV, oh boy, just missed that. Then they have a good laugh, because HIV is explained up there. 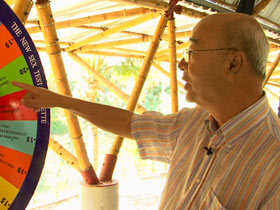 DE SAM LAZARO: Mechai has long relied on good laughs to explain HIV and sex education in this conservative Southeast Asian nation. He comes from a prominent family and was trained as an economist. But Mechai became a TV personality who spearheaded family planning campaigns in the seventies and, two decades later, condom use to prevent HIV. In this predominantly Buddhist nation, he invited monks to bless the efforts.

MECHAI: And in the Buddhist scriptures it said many births cause suffering, so Buddhism is not against family planning. And we even ended up with monks sprinkling holy water on pills and condoms for the sanctity of the family before shipments went out into the villages. 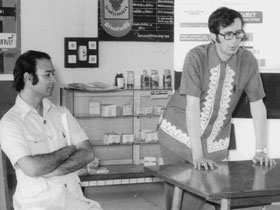 POTTS: I think it’s a seamless evolution. Mechai, at least in the past, used to talk about fertility-led development, and once we had these contraceptive distributors in most villages, you know, after 3 or 5 years they were the people who had intensive chicken rearing, or who had a sewing machine, or had a microloan.

DE SAM LAZARO: Thailand is no longer considered a less developed country, but there’s a growing gap between the Bangkok area, where the factories are, and rural farming regions whose young people have to migrate to the city for work. Mechai has tried to develop sustainable ideas that would be accessible in rural settings. On a beach resort once owned by Mechai’s family—it’s now run by a nonprofit group he founded—is a garden of so-called intensive agriculture.

DE SAM LAZARO: The unusual metaphor aside, he says these recycled bags of potting soil can grow produce, in this case, cantaloupes with a minimum of water and space and maximum profit. 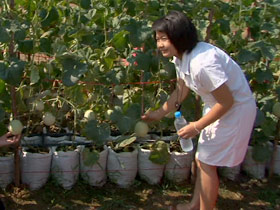 MECHAI: You’d grow it four times a year, so that’s 24,000 baht. That’s just under a thousand dollars for this much space. Nearly as good as marijuana. Might be even better. Don’t have to share with the police, either.

DE SAM LAZARO: Joking aside, he says Thai staples like mushrooms, limes, poultry, and hydroponic produce could be grown in rural enterprises. To demonstrate, he took us to Buriram Province, about four hours from Bangkok. He’s worked here for two decades, introducing new ideas like intensive agriculture. Several older initiatives have taken off independently.

MECHAI: You have a factory in the middle of nowhere here.

DE SAM LAZARO: This shoe factory was started with international grants. It now provides work for 140 to 200 people, producing mostly for the multinational Bata shoe company.

MECHAI: We helped, from Canadian money again, to provide a loan for them to establish a factory building, and then helped to get Bata to come in, rented the machinery and then bought the machinery, and they’ve been on their own for about 15 years.

DE SAM LAZARO: A short distance away are buildings that were once used to train people to raise livestock. Those activities have since shifted to people’s backyards and, in the buildings they vacated, more factories making brassieres in this building, ice skates in the next. 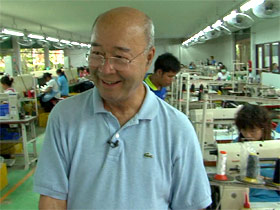 MECHAI: How could you imagine an old chicken pen and an old pig pen making this stuff, or brassieres?

DE SAM LAZARO: Was it really a tough sell at first?

MECHAI: Oh, yes, took seven visits. They did it out of pity at first. Then they realized that it worked. And when we bring someone new down they can’t quite fathom it how it can be done because they’re so used to the perception that you do everything like this in Bangkok, in the city.

DE SAM LAZARO: These factories provide livable if not lucrative wages and social benefits. But to truly transform rural communities, Mechai says it will take new approaches in education, which is where the Bamboo School fits in. It is now three years old and serves grades seven through ten. Building funds came from profits from Mechai’s resort, the Gates prize money, and corporate donations. Longer term, the school is developing its own vegetable farm, a key part of the business strategy.

(speaking to Mechai): So when this is up and running and flourishing, the cantaloupes and the limes will be paying the teacher salaries here?

MECHAI: Amongst other things, yes.

DE SAM LAZARO: The motto here is “The more you give, the more you get.” Quite apart from academics, for every student there are strict work requirements. 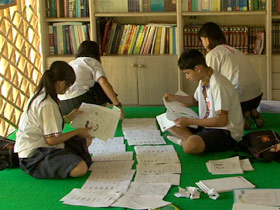 DE SAM LAZARO: As part of their service, these students were preparing lesson plans to teach younger children in a nearby government school. It’s part of their training in leadership and critical thinking and a departure from the rote learning standard in most Thai public schools.

RUTHAICHANOK JUNPENG (Student): The teachers are here to teach us, but they’re also like friends, like an older friend that you can go to for advice, not just about what you’re learning.

PIMPAKAIN SIRI (Student): My parents are rice farmers, and I expect my future to be quite different, because I want to become a doctor, and I believe I can do that. I’ve learned new ways to help my parents, who are used to doing agriculture the traditional ways and I can help raise their income.

DE SAM LAZARO: And because students at this school regularly volunteer, they feel connected to their rural communities, says teacher Nantina Saninchai. She says two-thirds of them will be able to create or find jobs here. 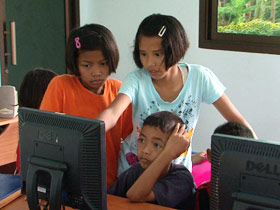 NANTINA SANINCHAI: So a number will stay here. They have computers, etc., similar to what they would in the city.

DE SAM LAZARO: Ideas from the Mechai school are catching on. On weekends here, children collect litter in exchange for spending time online in a new community center or in a toy and book library. Parents and elders prepare food for the children. The village chief says one reason this community thrives is that parents are around for their children.

CHAMLEUNG PANRIN: Eight years ago, migration was rampant. Everybody would leave, and you only had children being brought up by the grandparents. Now it has very greatly improved.

MECHAI: The only road out of poverty is through business enterprise, and this is what we’re doing. Teach them, train them, lend them the money—not give them the money —and the business skills. But probably very, very important to go with it too is community empowerment.

DE SAM LAZARO: And you need to start it young?

MECHAI: Yes. Yes, start them young. When you start learning how to give when you’re young, when you get older it is second nature. Just like stealing. Start young and you keep on stealing forever. Ask my politicians.