FRED DE SAM LAZARO, correspondent: Back in the 1990s, Cambodia, impoverished and rebuilding after its genocidal Khmer Rouge years, took steps to give its new garment industry a competitive leg up. It agreed to a system of fair labor standards with a minimum wage rule, a limit to working hours, unions to represent workers, and freedom of expression. All would be open to international inspection. Today, there are perhaps 400,000 garment workers in more than 300 factories in and near the capital, Phnom Penh. They are subcontractors to brand names and retailers in Europe and America.

Beginning from scratch less than two decades ago, Cambodia’s garment industry has grown into the largest export earner for this country. Three out of four dollars that come into Cambodia come from the garment factories.

The key question is how much all this has benefited workers, almost all of whom are female. Many factories have been plagued by labor unrest. Occasionally, it’s been violent. There have been frequent reports of faintings on factory floors. The unions cite unhealthy conditions and workers weak from malnourishment.

CHEA MONY (Trade Union Leader): Workers have very low salaries, only $61US per month. You cannot afford to live on that day to day. It’s legalized slavery. 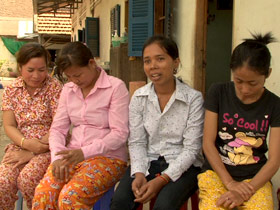 DE SAM LAZARO: Chea introduced us to these workers. Like most of their colleagues, they are young, rural migrants living in tight, shared quarters, supporting extended families back home.

SOY NAKRY (Garment Worker): We have to pay for the room, electricity, water.

VONG SOPHAL (Garment Worker): In the evening, we just buy some fish and make some soup. Sometimes we have to keep part of it for breakfast.

DE SAM LAZARO: Chem Savet supports a farm family in a rural province 60 miles away, including her husband, her parents, and two-year-old daughter.

CHEM SAVET (Garment Worker): I can only see her once a month. When I go home she really misses me, so she hugs me, especially when I must leave one day later. One time she put some of her clothes in when I was packing. She wanted to come with me.

DE SAM LAZARO: The standard six-day, 48-hour week plus overtime leaves little time for travel to see family. Factory managers aren’t sympathetic during family emergencies, they complained, and many employees are on temporary instead of permanent employment contracts.

FEMALE GARMENT WORKER: Previously, we saw a lot of strikes, but those haven’t happened recently in our factory because there are a lot of newcomers. 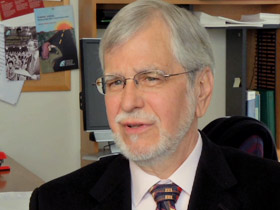 SCHILLING: Whether you’re talking about all the Abrahamic traditions, the Christian, Jewish, and Muslim traditions, at the core is that concept of the human dignity of the person. So you’re taking that and then you’re moving into the realities.

DE SAM LAZARO: He says most garment workers make more than the $61 minimum wage; closer to $90 dollars a month, he says, higher with overtime. That’s more than policemen, teachers, or most civil servants, he adds. 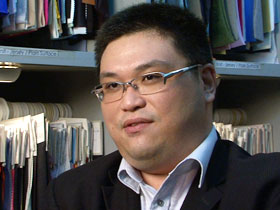 DE SAM LAZARO: Cambodia’s minister of commerce says factory owners have little wiggle room because they are no more than contract tailors.

DE SAM LAZARO: Prasidh could impose higher wages in the factories, most of which are owned by investors from China, Taiwan, Korea, and Malaysia. But he says that would be suicidal.

PRASIDH: There is a lot of demonstration to ask for living condition, ask to increase the minimum wage, and what happen? The investor just packed their sewing machine, and they go home!

DE SAM LAZARO: Or they go to another country? 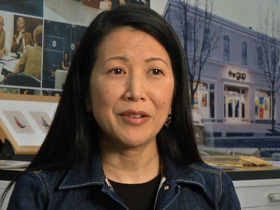 DE SAM LAZARO: San Francisco-based Gap is the largest buyer of garments made in Cambodia. It also buys from dozens of other developing nations. Spokeswoman Bobbi Silten says Gap, which owns the Old Navy and Banana Republic chains as well, has no plans to leave Cambodia.

BOBBI SILTEN (Gap Foundation): We have very longstanding relationships with many of the vendors in Cambodia. It’s been one of our top ten sourcing countries for the last ten years. So we are very committed to being there, and we think that the labor standards that they have put in place is one of the reasons why we continue to stay.

DE SAM LAZARO: Ken Loo says buyers may talk up the labor standards. But in 2008, when the global recession began, many, including Gap, cut back in Cambodia. At the same time, he says, Bangladesh—with lower pay and labor standards—saw no drop in business.

LOO: It just confirms our knowledge that, indeed, compliance of labor standards is the icing on the cake. Price is the cake.

PRASIDH: It is a race to the bottom, and Cambodia—to survive we have to create something special. 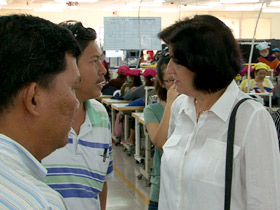 DE SAM LAZARO: Jill Tucker says Cambodia does have a special competitive advantage since buyers want to be associated with ethical labor standards. Tucker heads an agency supported by the UN and the US government that conducts factory inspections for compliance with the labor standards.

DE SAM LAZARO: She cites this factory, run by a Taiwan-based company, QMI, as a good example. There’s plenty of air and light and, managers say, good labor relations. All ten thousand of QMI’s workers are on permanent contracts, and wages here range from $90 to as much as $150 a month. That’s still below what unions say is adequate. But Tucker says demands for higher wages, however justified, are a tough sell given realities in the US, the biggest market.

TUCKER: I really wonder if American consumers are willing to pay significantly more for their apparel.

TUCKER: Yeah. The cost of apparel has only dropped over the past decade. None of us are paying more for our garments than we were 10 years ago.

SILTEN: We do need to think about what consumers are willing to pay, where we can source these goods to achieve, you know, get the math to work for everyone. From a macro standpoint I think it’s a very complex issue.

DE SAM LAZARO: Gap’s Silten isn’t sure if consumers would pay more for ethically produced garments. The Interfaith Center’s Schilling says retailers like Gap, pressured by competitors and Wall Street investors, aren’t likely to ask them to do so. More likely, he says, campaigns by activist groups should bring a greater awareness of worker rights issues as they are now on environmental ones.

SCHILLING: There’s more and more advertising around, you know, sort of ecologically sound products. I think more and more that’s going to happen within the social space as well.

DE SAM LAZARO: That would bring greater awareness of the plight of workers in Cambodia and more urgently other nations that don’t subscribe to fair labor standards, and Schilling says it could not happen fast enough.