KIM LAWTON, correspondent: During a special reception in New York, guests are paying their respects to the Venerable Nicholas Vreeland, or as many here still call him, “Nicky.” The Dalai Lama has given Vreeland an historic task: as the first Westerner appointed abbot of a Tibetan Buddhist monastery, he’s to be a bridge between East and West.

ABBOT NICHOLAS VREELAND: His holiness wishes to bring Western ideas into the Tibetan Buddhist monastic system and that comes from his recognition that it is essential that there be new ideas brought in, that there be new air brought into these institutions.

LAWTON: For many observers, it may be surprising that an American has been given this important role…and perhaps even more surprising given the background of this particular American. Vreeland had a privileged upbringing: his father was a US diplomat and his grandmother was fashion icon Diana Vreeland. He was a photographer who had worked in some of the top studios. And then in his 20s, he began exploring Tibetan Buddhism.

VREELAND: What is it about Tibetan Buddhism that interested me? I think that it’s this very linear, very carefully organized, path to enlightenment that I, I liked. 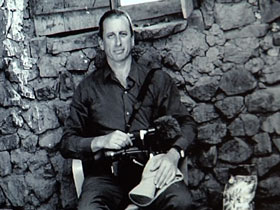 LAWTON: Vreeland sees a linear progression in his own path into Buddhism. He was born in Switzerland and also lived in Germany and Morocco, before his family returned to New York. They were Episcopalian and sent 13-year-old Nicky to a boys’ boarding school in Massachusetts. He was miserable there, until he discovered photography.

LAWTON: Vreeland says he had a good relationship with his famous grandmother, Diana, the legendary editor of Vogue magazine.

VREELAND: I went to NYU to study film and at that time initially lived with her and became very close. She was a wonderful, enthusiastic friend.

LAWTON: She opened the door for him to work with prominent photographers Irving Penn and Richard Avedon.

VREELAND: In my role in the studios of these photographers I was the assistant, I was the student, I was the devotee as it were. It is the relationship that I have with my teacher now. 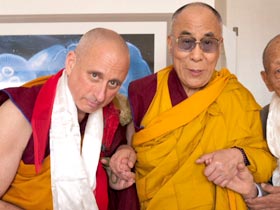 LAWTON: It was Richard Avedon’s son John who in 1977 first introduced Vreeland to Khyongla Rato Rinpoche, founder of the Tibet Center. Under Rinpoche’s supervision, Vreeland began learning about Tibetan Buddhism.

Then in 1979, he went on a photography assignment in India. Because of his growing interest in Tibetan Buddhism, he included a visit to Dharamsala, headquarters of the Dalai Lama. Vreeland received permission to photograph the Tibetan leader. His camera had an extremely slow exposure, so his subjects had to sit absolutely still for one minute. That was a challenge for the Dalai Lama.

VREELAND: The shutter opened and we waited 10 seconds, 20 seconds, 30 seconds, 40, seconds, 50 seconds, and then his holiness started to move. And we did one time after another, after another, and suddenly after all these attempts to get a, a fully, a properly exposed shot, we both burst into laughter and it was as if all the tension went.

LAWTON: The Dalai Lama tried standing and they finally managed to get the shot.

VREELAND: His holiness very, very kindly remained there as I packed up my equipment and talked to me. And I had been so moved by the way in which the Tibetan people had supported me, had helped me in my travels and during my time in Dharamsala, and I asked his holiness what I could do in return. And he said, “Study.” 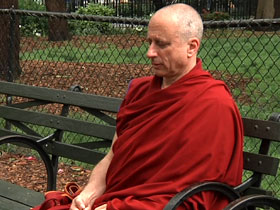 LAWTON: Vreeland took that advice to heart, and with the help of his teacher, explored the Tibetan Buddhist concept that logic clears the mind and facilitates meditation, which then can lead to developing compassion and attaining enlightenment.

VREELAND: If the ultimate goal is the full enlightenment of a Buddha, a Buddha who is omniscient, that’s the ultimate state of awakenness. All the steps that lead to that are little awakenings.

LAWTON: In 1985, Vreeland decided to become a Buddhist monk. I asked him how his grandmother took the news.

VREELAND: She was definitely concerned. She was not a big proponent of following a spiritual life, and so for a grandson to wish to become a monk was not something she was too happy about.

LAWTON: But she came to accept it?

VREELAND: Well, yes. She was always wonderful about showing her support for whatever I decided to do.

LAWTON: Vreeland pursued his monastic studies at Rato monastery in South India, the monastery that he will now lead. Rato was established in Tibet in the late 14th century to preserve Buddhist teachings on logic and debate. After the Chinese takeover of Tibet, Rato was reestablished in India. 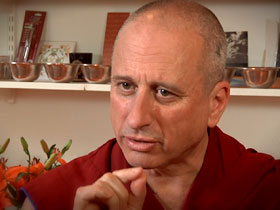 When Vreeland arrived in 1985, there were 27 monks. Today, there are about 100 between the ages of six and 90. The monastery undertook a massive construction project, which was largely funded through the sale of Vreeland’s photographs. He raised $400,000 with a special series of photos documenting life in and around the monastery.

This 2002 photo of the Dalai Lama was taken in Rato’s debating court. Over the years, Vreeland has collaborated closely with the Tibetan leader,

VREELAND: His Holiness is practical, down to earth. It was those two qualities that I felt the moment that he walked into the room the first time I met him. And they were a surprise. I mean, I think in the West we have a view of holiness as being sort of ethereal and this person was not that.

LAWTON: He says the Dalai Lama hasn’t gotten any more patient in posing for photos.

VREELAND: Many years ago, when I photographed His Holiness, he, I was using the large-view camera. And, after a few sheets of film, His Holiness said, “So, OK?” And I said, “Well, not quite.” And he said, “We must be content with what we have.” [Kim laughs.] And he left. 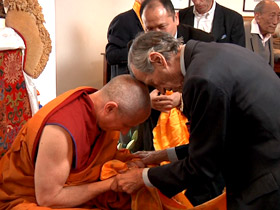 LAWTON: As abbot of Rato, Vreeland will have administrative and spiritual responsibility for the monastery and its monks. He’ll also interact with abbots of the other Tibetan monasteries. And it’s here that the Dalai Lama has instructed him to help incorporate more Western ideas.

VREELAND: These institutions, if they, if they aren’t contemporary won’t have any relevance. Now, of course one has to be very careful. If you go too far you dilute what they do possess and you’ve lost everything.

LAWTON: Vreeland will divide his time between India and New York, where he’ll continue as director of the Tibet Center, which helps promote Tibetan Buddhism in the West.

VREELAND: I am a human being, I’m a Buddhist monk, I am a Westerner, and how I will bring what I believe in and what I have been, let’s say formed in, trained in? I think it’s by just living my life.

LAWTON: He’s well aware of the challenges he faces.

VREELAND: Your only influence on the rest of the world is the work that you do on yourself and this is an opportunity to do just that in respect to my monastic community.

LAWTON: As for his photography, he says in the new digital world, he finds it challenging to maintain an attitude of mindfulness as he takes pictures.

VREELAND: I wish it were easier to give it all up. I tried hard. But I’m still taking photographs and whether the abbot is going to be able to go out and take pictures, I don’t know. I shall see.