SAUL GONZALEZ, correspondent: In a packed convention hall in Bakersfield California, members and friends of the United Farm Workers recently celebrated this legendary labor union’s 50th anniversary. They also came to honor the legacy of the UFW’s founder, the late Cesar Chavez, one of the most famous figures in organized labor history who during his life some saw as a dangerous radical, and others, as a kind of saint.

ARTURO RODRIGUEZ: You know, Cesar passed away 19 years ago. To some of us it was like yesterday.

GONZALEZ: Arturo Rodriguez is the president of the United Farm Workers and Cesar Chavez’s son-in-law.

RODRIGUEZ: He taught us. He nurtured us. He made sure that we understood really the importance and the criticalness of doing what we’re doing. He lived the ideals of the farmworker movement.

GONZALEZ: It was in the 1960s and ’70s that Chavez, who worked in the fields himself as a teenager and never received a formal education beyond the eighth grade, organized poor and immigrant farmworkers, first in California and then across the Southwest.

Through strikes in the fields and the organization of national consumer boycotts of table grapes and lettuce, Chavez and the UFW forced big growers to the negotiating table, where the union won historic concessions. 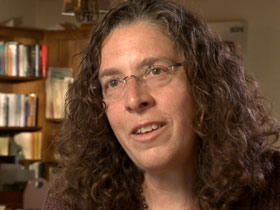 MIRIAM PAWEL (Author, The Union of Their Dreams): What Chavez did was put farmworkers, who had really been sort of invisible, into the public consciousness.

GONZALEZ: Miriam Pawel, the author of a critically acclaimed history of the UFW, is now writing a biography of Cesar Chavez.

GONZALEZ: And Chavez became a labor and civil rights superstar, courted by national political figures like Robert F. Kennedy. And in 1969, he became the first Mexican American to appear on the cover of TIME magazine.

Nearly two decades after his death, Chavez is still a potent symbol, especially to America’s growing Latino population. Streets, schools, and monuments across the country carry Chavez’s name. And every year thousands visit his gravesite at the National Chavez Center 30 miles east of Bakersfield. 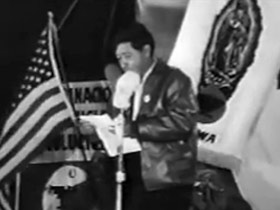 Chavez and the UFW often achieved the union’s greatest victories in partnership with religious groups. It also relied heavily on religious imagery, such as marches featuring a banner of the Virgin de Guadalupe and Chavez’s tactic of fasting to bring attention to the plight of farmworkers.

CHRIS HARTMIRE: The religious symbolism was central to the UFW.

GONZALEZ: Chris Hartmire, a Protestant pastor, was in the 1960s the director of a ministry for farmworkers, a position which led him to become one of Cesar Chavez’s closest confidants. He says Chavez understood working with churches could bring his union practical benefits.

HARTMIRE: Because of the power of the church to communicate its message out there and the fact that the church is everywhere. And because of the credibility it gives the movement. The growers say “he’s communist.” People believe a lot of things about the church, but they don’t believe we’re communist, so it helped to defeat that kind of propaganda.

GONZALEZ: At the Chavez national monument, several displays honor the role of faith in the UFW’s history. Yet even as the UFW celebrates its past achievements and the legacy of Cesar Chavez, many are asking troubling questions about this union, namely, does it still remain relevant, and is it doing all that it can to help today’s generation of farmworkers? 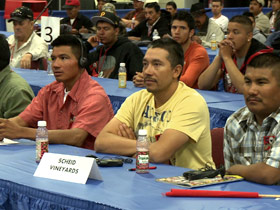 PAWEL: People need to realize that the UFW is not helping farmworkers today and whatever it did in the past really is history.

GONZALEZ: Pawel says because contracts with growers have been allowed to lapse and the Union hasn’t been aggressive with recruiting, the UFW’s membership has plummeted from more than 80,000 members in the 1970s to fewer than 6,000 today. And with that decline has come a loss of clout and the ability to represent farmworkers. Pawel traces the union’s problems back to Chavez himself and his increasingly heavy-handed leadership of the UFW before his death.

(speaking to Pawel): Is it fair to say, according to your research, that Chavez starts cultivating a cult of personality?

PAWEL: Yeah, it certainly becomes a cult of personality. Things get very ugly in the late 70s. There are a lot of people who are purged, they’re purged in very ugly ways. There are a lot of people who believed that they were going to spend their lives doing this and who had committed themselves and get cast out in very ugly ways, denounced as spies and traitors in ways that decades later really haunt them. 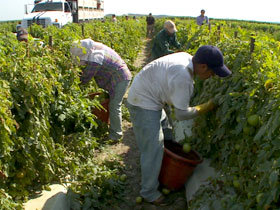 GONZALEZ: In rural areas today the UFW still campaigns on behalf of farmworkers such as an effort to give legal status to workers who have been in the United States illegally and advocating a ban on the use of pesticides that could harm field hands. But critics accuse the UFW of being too often more concerned about public relations and the marketing of its image than labor organizing. A taste of that was evident at the UFW’s convention where product after product carried the union’s logo.

(speaking to saleswoman at convention): What else do you have?

Saleswoman: This is a change container, some bracelets, shot glasses, there’s the shirts down there. There’s a bunch of buttons, historical buttons. They even have pet leashes.

GONZALEZ: There are also criticisms of the nonprofit Cesar Chavez Foundation, an off-shoot of the UFW run by Cesar’s son, Paul Chavez.

PAWEL: The Cesar Chavez Foundation reported in 2010 taking in $30 million, an enormous amount of money, that is not money being spent on farmworkers. 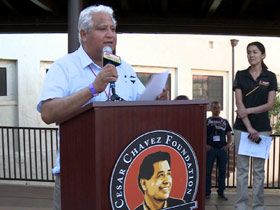 GONZALEZ: Instead of union organizing, the Chavez Foundation spends its revenue operating the National Chavez Center and its grounds, building affordable housing, and running Spanish language radio stations in the west. Paul Chavez says it’s all in keeping with his father’s vision.

PAUL CHAVEZ: This is part of who we are, is providing services to workers in the community and at the workplace. So it does not stray. Actually what it does is, it’s keeping and adhering to the original principals of the movement.

GONZALEZ: But what about the farmworkers of today, decades after the UFW’s greatest victories?

Well, much of what the union fought for, like rest periods and water and shade for workers, still exist. The vast majority of field hands in places like California’s San Joaquin Valley, are often just as exploited and vulnerable as they were when the UFW first formed. 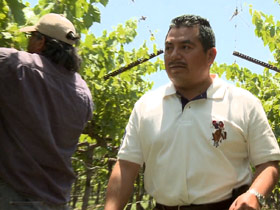 FAUSTO SANCHEZ: One of the biggest problems that we see every day is the wages, the low wages that they get paid.

GONZALEZ: Fausto Sanchez is a community worker with the California Rural Assistance League, which advocates on behalf of farmworkers. He says big growers still keep tight control over their workers through a system of foremen who fire farm hands at the first sign of organizing.

GONZALEZ: How many people that you talk to are in a union then, whether it’s United Farm Worker or some other union. Any of them? Or a very small number?

SANCHEZ: A very small number. I would say about one percent or two percent.

GONZALEZ: One percent or two percent of farmworkers you see are involved in organized labor? 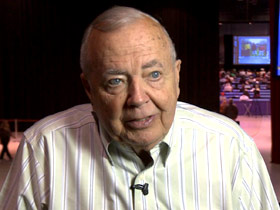 HARTMIRE: From an outsiders perspective it doesn’t seem like there’s a lot of new organizing going on, and I wish there were, but I also know it’s extremely difficult. Workers in the fields now don’t know who Cesar Chavez is. They think he’s a boxer from Mexico, Julio Cesar Chavez.

RODRIQUEZ: The reality, it is tough.

RODRIQUEZ: There is no doubt that we have a lot of work to do, but at the same time we have made a lot of gains, we’ve made a lot of victories, and we’re very thankful for what we’ve been able to accomplish, and we look forward to continue working as hard this next fifty years as we did this last fifty.

GONZALEZ: The union delegates and friends who gathered in this hall hope the UFW’s best days are still ahead of it and not in the history books.