LUCKY SEVERSON, correspondent: This is the Mormon Church’s Crystal City Chapel just outside Washington, DC. There are several others in the area, but this one is unique: the 800 members who attend here are all single. Along with worshiping, they’re here for one other very important reason: to find a partner and get married.

This is Bishop Lewis Larsen, who leads a congregation of older singles aged 31 to 55.

BISHOP LEWIS LARSEN: If you were to look across the general spectrum of single adults, the trend in America is not to even marry at all but to cohabitate. That is not a trend in the Mormon Church.

SEVERSON: If there’s any doubt, talk to some of the singles here.

ADAM NILSEN: I know that God wants that for me. I know that man was not meant to be alone, nor was woman, but that we complement one another. 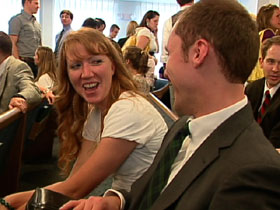 DARLA MARBURGER: I sure think I was. I think I’ve been ready for a long time, but I haven’t been plucked from the vine yet.

BEVERLI JO DEWALT: My grandma offered to find someone to pay someone to date me, because she was fairly convinced I was not able to do that on my own.

SEVERSON: Sociology professor Brad Wilcox is director of the National Marriage Project at the University of Virginia. He says the marriage rate in the US has seen a dramatic decline since the 1970s at a 14-fold increase in couples cohabiting. But among practicing Mormons, marriage is still sacred.

WILCOX: They sacralize marriage, obviously, and they view marriage as an eternal institution that exists beyond this space and time.

SEVERSON: Professor Wilcox is speaking about temple marriages, where members in good standing are sealed together for time and all eternity. 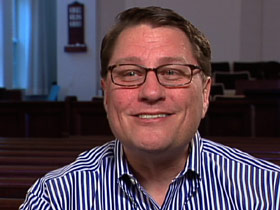 LARSEN: When you die and your spouse dies, you will be united as a husband and wife. When your children die, they will be united with you as a family and that the family unit continues on, and I know that that’s a concept that is not generally taught in the Christian world, but it’s very sacredly held concept in Mormonism.

SEVERSON: Marriage has always been a sacred principle of the Mormon Church, but it took on an added dimension when church president Thomas Monson, who is considered a modern-day prophet, expressed alarm at the church’s most recent general conference that not enough members are getting married.

PRESIDENT THOMAS MONSON: Now I have thought a lot lately about you young men who are of an age to marry, but you have not yet felt to do so. I see lovely young ladies who desire to be married and to raise families, and yet their opportunities are limited because so many young men are postponing marriage.

SEVERSON: One reason church leaders are pushing marriage so urgently is that so many young men in the mid-20s are falling away and becoming inactive, focusing on the kinds of things that occupy other young men—getting an education, a job, and having fun.

It’s important to the church and to its young men that they get married, because only married men can hold high leadership offices, and the church says only Mormons who marry can reach the highest realm in the afterlife. 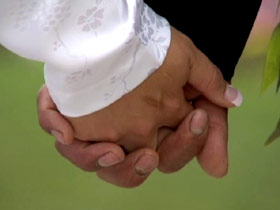 Since serving a church mission, many young Mormons in the DC area have spent their time pursuing advanced degrees. Beverli Jo DeWalt has been working on a career at the State Department.

DEWALT: Most of the folks out here are people that have pursued an education, pursued a career and not with the purpose of delaying marriage, but with the idea that we want to have a full life that includes all of those things.

SPENCER WILLIAMS: I’ve been just very busy with business, and it wasn’t until about six months ago when I really decided I do want to get married.

SEVERSON: How about you, Steve, what’s your excuse?

STEVE ARCHIBALD: Well, beyond the obvious or…?

SEVERSON: Steve Archibald is 28, has a master’s in accounting.

ARCHIBALD: There’s definitely a lot of pressure to get married, but at the same time there’s not pressure to rush into any kind of decision. We can all say that we’re looking. We’re doing our best to try and find the potential “10” out there.

SEVERSON: One high church leader suggested that in looking for a mate, young Mormons like Steve should stop reaching for a “10.“

LARSEN: It’s my job as bishop is to bring a little reality on this, that what they thought they were going to marry probably never did exist. You know, people have faults. Some might be a little overweight, some might be losing their hair, and that doesn’t mean that they are not a fantastic person. 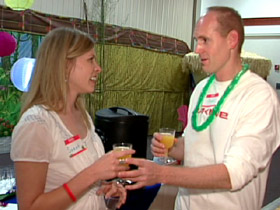 SEVERSON: This is an annual social event in Washington for single Mormons aged 31-55. Washington may not be the hub of the church, but there are between 50,000 and 70,000 members living in the area, the largest concentration East of the Mississippi. For women in their mid-30s who want to start a family, more and more are taking the initiative.

LARSEN: We are a traditional church, and you would say women don’t initiate. But I think that changes when you’re around 30. Yeah, women are much more proactive in my ward.

NILSEN: Having lived in other places I’ve seen other cultures, that women that do take a lot of the initiative.

SEVERSON: So have you had it happen to you?

NILSEN: Have I had women take the initiative with me? Yeah, absolutely.

DEWALT: I had the opportunity to be married when I was 21—a great guy, a fantastic guy—but I didn’t feel ready, and I think had I gotten married at that point I wouldn’t have been happy.

SEVERSON: Do you think there’s a downside to getting married too young? 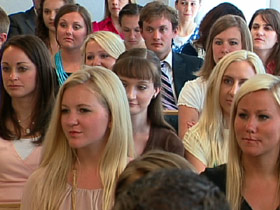 LARSEN: Don’t ask me, because I married in my mid-30s, so I’m kind of like my own congregation.

SEVERSON: Bishop Fonz Allen has a congregation of 21-to-30-year-old singles. He says getting married young and struggling can be a good thing.

SEVERSON: Nationally, the divorce rate is down, from 50 to 43 percent. Among Mormons it’s about 20 percent. Church leaders say it’s because of the strong emphasis on family—one night is set aside each week for family home evenings—and also because of the church’s teachings on chastity.

LARSEN: In our faith we don’t allow for premarital sex, and I’m sure that does happen, but it’s a rarity, and we are teaching them to hang onto their values. 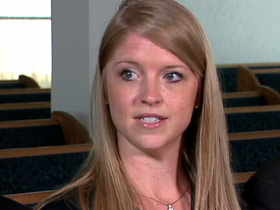 MEGAN BAER: We have sex drives just like everybody else, so of course it’s very hard, but I love what we call the law of chastity, which is no sex before marriage and complete fidelity when you’re in marriage, and I think it’s kept me from a lot of regret and pain.

WILCOX: Individuals who have more sexual partners prior to marriage are more likely to get divorced compared to those who do not. It’s something about forming a bond with someone that is then broken, and the way in which that may lead to a certain distrust of the opposite sex or a certain kind of loss of faith in relationships or in romance.

SEVERSON: Another reason for the low divorce rate is that Mormons usually try to date someone of their own faith. Some we spoke with said they had dated outside the church, but it hadn’t worked out. Others are like Steve.

ARCHIBALD: I do not date non-Mormons just because we’re pretty lucky in this area. The numbers are in our favor, speaking for us guys. In our congregation alone here today will have 300 individuals, and close to 200 of them will be women.

SEVERSON: After the church service, the search for a lifelong eternal mate continues in earnest. Bishop Larsen predicts that by the end of this year, at least 20 couples in his congregation of 200 will be engaged or married.