FRED DE SAM LAZARO, correspondent: The billboards and signs in the Jackson Heights section of Queens, New York, reflect dozens of languages, cultures, and nationalities. It’s an immigrant community of rich diversity, but also plenty of poverty. And there’s a store for that too: an American version of Bangladesh’s famous Grameen Bank.

No fancy lobby here—there aren’t even enough chairs. But from this and five other cramped quarters in Queens and as far away as Oakland, California, Grameen America disburses dozens of micro-business loans each day—most for around $1500, all of them to women. It is the brainchild of US-trained economist Muhammad Yunus, who won the Nobel Peace Prize for success with microlending in his native Bangladesh. He wanted to prove the concept could work in a developed country. Using foundation grants and borrowing commercially under a federal community reinvestment law, Grameen America began in 2008—to wary customer reception. 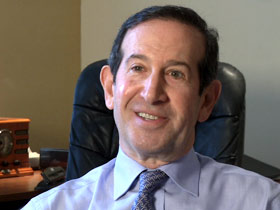 STEPHEN VOGEL (CEO, Grameen America): They were afraid that what we were offering—a low-cost loan, no collateral, no credit scores, no history necessarily of being in business and we would give them a loan—they were afraid that there’d be something that was going to come back in the end. It would be we’ll raise the interest rates, we would do something. But we didn’t.

DE SAM LAZARO: But word spread quickly, he says. Already many borrowers, like Maria del Socorro, have paid off first and second Grameen loans. Del Socorro, a Colombia native who’d had only housekeeping jobs before, opened her decorations business. She’s fulfilling a life-long goal to turn her crafting skills into a business. Business is good and growing, she says.

MARIA DEL SOCORRO: (speaking in Spanish): It’s good. I do all kinds of events, like birthdays, first communions, weddings. All the foam work you see is done by hand, I do all of this by hand.

DE SAM LAZARO: She is among 11, 000 women who have received loans from Grameen America.

(speaking to Shah Newaz) : When you were starting out in Bangladesh working for Grameen, did you ever dream that you’d be working with poor people in the United States of America? 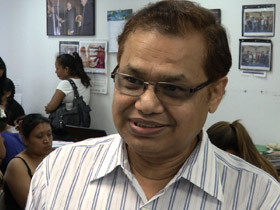 VOGEL: The United States is a country that everyone thinks has money, doesn’t have any poor people. We have more than 45 million people living in poverty in the United States.

DE SAM LAZARO: And he says it takes much more than financing to help them break out of it: business counseling, keeping the books, paying bills, even opening savings accounts, which is required of borrowers. Even that is often not enough. Joe Selvaggio, a former Catholic priest who’s worked for decades with poor people, says many would-be entrepreneurs fail because their finances are precarious.

JOE SELVAGGIO (Founder and Co-Chair, MicroGrants): The car got impounded or they got sick or their kids got sick or the landlord, you know, there was a storm and, you know, they got some physical damage or something, you know, Setbacks happen to people so often. I remember one time we gave a check to somebody, and she put it in the bank, and she had so many bank overdrafts that she—it ate up almost the whole $1000 with bank overdraft charges. 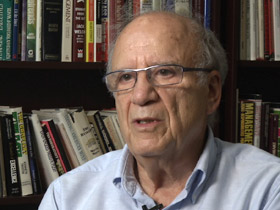 DE SAM LAZARO: Selvaggio runs MicroGrants, a Minnesota nonprofit that works alongside those that provide microloans. But he says new entrepreneurs often need something more to get them over the hump. So he gives them grants of $1000. Several MicroGrants clients are in Midtown Global Market, located in a long-shuttered Sears Roebuck store in a recovering Minneapolis neighborhood.

SELVAGGIO: A lot of those places already had a $5000 loan for inventory that they can’t—they don’t want any more loans. They can’t make the cash flow, so $1000 injection of cash is really helpful.

LAURA SANCHEZ: We used the money for like to fix the store, depends what we need—like displays or decorations for the store, we used for that.

TRUNG PHAM: We used the MicroGrants dollars at the time for more signage and to redo our menu. Our menus before was not professional, was more of a homemade menu.

MARTIN AKINSEYE: I used it to purchase about 30 hand-made Senegalese drums which we use to offer free drum lessons every Sunday. 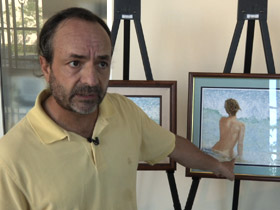 DE SAM LAZARO: Salvador de Montesinos works as a masseur and part-time cook to make ends meet. His $1000 grant brought him closer to the goal of earning a living as an artist. He was able to buy a machine to make prints, which are much easier to sell than his very high-priced originals.

DE SAM LAZARO: Some day he hopes to live off sales of originals.

DE SAM LAZARO: Over how many years?

DE MONTESINOS: All my life!

DE SAM LAZARO: Not surprisingly, he sells about ten times that number of prints per year. 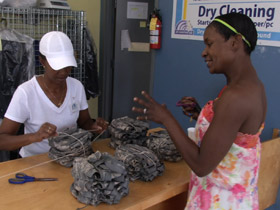 One MicroGrants client who’s closer to her life-long goals is Shantae Holmes. She opened a laundromat in Minneapolis’s economically depressed north side two years ago, a community she’s deeply committed to.

DE SAM LAZARO: Her business began with small loans, but the real source of stability—and profit—come from a six-figure US Army contract to service a Minnesota-based unit. She got help from a local nonprofit that helps minority entrepreneurs.

JAMARA CHEEK: (Metropolitan Economic Development Association): She had no experience with government contracting. People are overwhelmed and daunted by government rules and regulations, and we literally held her hand and coached her through that process. It took four months after submitting an offer of her services to the government for her to hear back from them.

DE SAM LAZARO: However, the huge volume of new business required a commercial truck she could not afford. The $1000 down payment assistance from MicroGrants salvaged her major contract, she says. 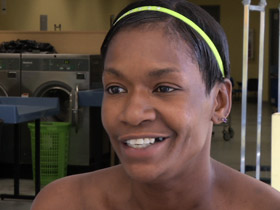 HOLMES: It takes money to make money, so therefore it was like, oh, I need some help to get this piece that’s going to be able to get me my bills at a zero balance. I need to spend this first, and Joe came in and made it easy for me.

DE SAM LAZARO: For Selvaggio, Holmes is a star client—a 41-year-old mother of three who was able to turn around an earlier life of chemical dependency and cancer driven by talent that can be realized with a little help—and often faith. As for his own motivation, Selvaggio says it is Christianity in its purest form.

SELVAGGIO: Most of the people that we give money to, they put a lot of faith in their God, and I don’t have a lot—that kind of faith, but what Jesus was doing, that’s—I’m founded in that. You know, he was helping the poor, and I’m like Pope John XXIII. They asked him what he wanted to do with his papacy, and he said, well I’d like to see that the poor have a little less suffering in life.

DE SAM LAZARO: So far, Selvagio has disbursed more than $2 million in $1000 grants. He gets funds from foundation and many wealthy Minnesotans he got to know from his days as a priest.

SELVAGGIO: These are entrepreneurs that have made money, you know, on their own, and they appreciate the, you know, principles of responsibility, accountability, production, getting, you know, business principles of delivering a quality product on time at a reasonable price. So they know that I can find people like Shantae or ambitious people like Salvador that are going to sell their products and make money and, you know, it’s got to be tied to work.

DE SAM LAZARO: Grameen America’s CEO Vogel, himself a successful entrepreneur who also founded a private equity firm, says its critical that small enterprises be nurtured among low-income Americans. It’s not just the best bet for people in poverty, he says. It’s often the only option.

VOGEL: They can’t get a job. Jobs are very tight. Overtime is very tight. Many of our borrowers do have jobs. They have part-time jobs, and they’re using these business opportunities to increase their income.

DE SAM LAZARO: With its careful oversight and counseling, he says Grameen America’s loan repayment rate has been 99-plus percent—far better than anything seen in big commercial banks.