Read an excerpt from LIFE OF PI by Yann Martel

DEBORAH POTTER, correspondent: On the surface, it’s an adventure story about a boy who survives a shipwreck in a lifeboat, alone, except for a man-eating tiger. But at a deeper level, “Life of Pi” explores the meaning and endurance of faith—an unusual theme for a Hollywood movie that critics have called “dazzling” and “magical.” For director Ang Lee, the experience of translating the best-selling novel to the screen required a leap of faith.

ANG LEE (Director, Life of Pi): It is a journey, as a test of the strength of our faith, of how firm we believe in it. I think that has to be the number one thing I took from the experience.

POTTER: In some ways, the story of young Piscine Patel, known as Pi, defies belief from the start. The son of a zoo-keeper, the boy is raised Hindu but also practices Christianity and Islam, to the disappointment of his father. 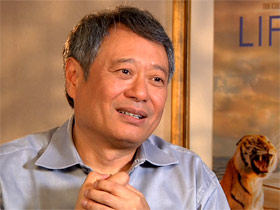 Dad: Because believing in everything at the same time is the same as not believing in anything at all. Listen, instead of leaping from one religion to the next, why not start with reason. In a few hundred years, science has taken us farther in understanding the universe than the religion has in 10,000.

Mom: Science can teach us more about what is out there, but not what is in here. (touches heart)

Dad: I much rather have you believe in something I don’t agree with than to accept everything blindly, and that begins with thinking rationally. You understand? Good.

Pi: I would like to be baptized. (Brother laughs, mom smiles.) 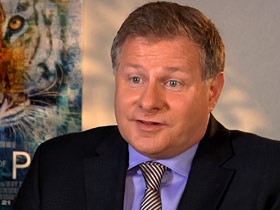 DAVID MAGEE (Screenwriter, Life of Pi): The openness to faith that it asks for in others, without preaching, is what I think attracted me to the book to begin with and I think it’s what I am most pleased with in the telling of the film.

Pi: God, I give myself to you. I am your vessel. Whatever comes, I want to know, show me.

POTTER: Stranded in the ocean, Pi senses God’s presence and power in the beauty of nature, stunningly conveyed in 3-D, but like Job in the Old Testament, he also rails at God for his suffering.

Pi: What more do you want?

MAGEE: He finds more and more of what surrounds him stripped away until finally he’s got nothing left to hold onto. It’s almost as though God is putting him through a further trial and saying, “Okay, that was just the beginning. Now you’ve got to confront me.” 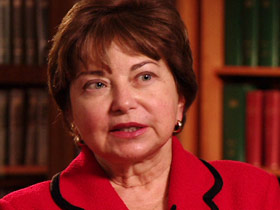 POTTER: At Georgetown University, Professor Barbara Mujica’s freshman seminar on faith, fiction and film is studying the Life of Pi. The story has become a fixture in comparative religion courses for college students across the country.

DANIELLE SMART (Student): Like God, reason is used to conceptualize things that you don’t understand.

PROF. MUJICA: This book really resonates with them. First of all it’s about a young person, just a few years younger than they are. It’s a book that doesn’t preach any religion. I think that the notion of finding the value in different religious traditions really, really resonates with them because they’re not close minded, they’re curious. At the same time we’ve also talked about not simply accepting everything, that Pi doesn’t have a kind of touchy feely kind of faith. And he understands that there are kernels of truth, and the same kernel of truth, in all of these belief systems. 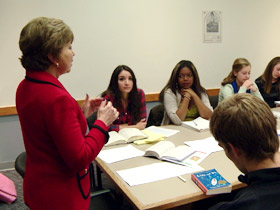 POTTER: From Noah and the ark to the Garden of Eden, Bible stories echo through the Life of Pi. The name of the ship, Tsimtsum, comes from the Jewish mystical teaching that God contracted to make room for creation. And then there’s the tiger, a God-like figure whose very presence keeps Pi alive.

POTTER: As an adult, Pi meets with a writer, who’s heard that his story “will make you believe in God.” 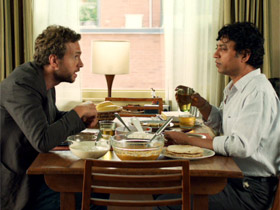 Pi: We get to feel guilty before hundreds of Gods instead of just one.

Writer: But you’re a Hindu first?

Pi: None of us knows God until someone introduces us.

POTTER: So is a film about a man’s search for God aimed at helping audiences find God?

POTTER: And as Pi himself says in telling his story, “You’ll decide for yourself what to believe.” For Religion & Ethics NewsWeekly, I’m Deborah Potter in New York.

Read this excerpt from Life of Pi, where Pi meets a pious Muslim baker: 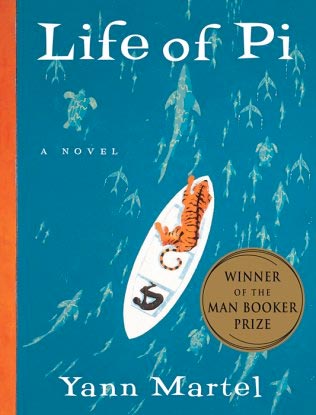 He was a Sufi, a Muslim mystic. He sought fana, union with God, and his relationship with God was personal and loving. “If you take two steps towards God,” he used to tell me, “God runs to you!”

He was a very plain-featured man, with nothing in his looks or in his dress that made memory cry hark. I’m not surprised I didn’t see him the first time we met. Even when I knew him very well, encounter after encounter, I had difficulty recognizing him. His name was Satish Kumar. These are common names in Tamil Nadu, so the coincidence is not so remarkable. Still, it pleased me that this pious baker, as plain as a shadow and of solid health, and the Community biology teacher and science devotee, the walking mountain on stilts, sadly afflicted with polio in his childhood, carried the same name. Mr. and Mr. Kumar taught me biology and Islam. Mr. and Mr. Kumar led me to study zoology and religious studies at the University of Toronto. Mr. and Mr. Kumar were the prophets of my Indian youth.

We prayed together and we practiced dhikr, the recitation of the ninety-nine revealed names of God. He was a hafiz, one who knows the Qur’an by heart, and he sang it in a slow, simple chant. My Arabic was never very good, but I loved its sound. The guttural eruptions and long flowing vowels rolled just beneath my comprehension like a beautiful brook. I gazed into this brook for long spells of time. It was not wide, just one man’s voice, but it was as deep as the universe.
I described Mr. Kumar’s place as a hovel. Yet no mosque, church, or temple ever felt so sacred to me. I sometimes came out of that bakery feeling heavy with glory. I would climb onto my bicycle and pedal that glory through the air.

One such time I left town and on my way back, at a point where the land was high and I could see the sea to my left and down the road a long ways, I suddenly felt I was in heaven. The spot was in fact no different from when I had passed it not long before, but my way of seeing it had changed. The feeling, a paradoxical mix of pulsing energy and profound peace, was intense and blissful. Whereas before the road, the sea, the trees, the air, the sun all spoke differently to me, not they spoke one language of unity. Tree took account of road, which was aware of air, which was mindful of sea, which shared things with sun. Every element lived in harmonious relation with its neighbor, and all was kith and kin. I knelt a mortal; I rose an immortal. I felt like the centre of a small circle coinciding with the centre of a much larger one. Atman met Allah.

One other time I felt God come close to me. It was in Canada, much later. I was visiting friends in the country. It was winter. I was out alone on a walk on their large property and returning to the house. It was a clear, sunny day after a night of snowfall. All nature was blanketed in white. As I was coming up to the house, I turned my head. There was a wood and in that wood, a small clearing. A breeze, or perhaps it was an animal, had shaken a branch. Fine snow was falling through the air, glittering in the sunlight. In that falling golden dust in that sun-splashed clearing, I saw the Virgin Mary. Why her, I don’t know. My devotion to Mary was secondary. But it was her. Her skin was pale. She was wearing a white dress and a blue cloak; I remember being struck buy their pleats and folds. When I say I saw her, I don’t quite mean it literally, though she did have body and color. I felt I saw her, a vision beyond vision. I stopped and squinted. She looked beautiful and supremely regal. She was smiling at me with loving kindness. After some seconds she left me. My heart beat with fear and joy.
The presence of God is the finest of rewards.

From “Life of Pi” by Yann Martel