LUCKY SEVERSON, correspondent: It’s not at all unusual for the call to prayer to be overwhelmed by the wail of a siren, not in this southwestern Chicago neighborhood. It’s known as Chicago Lawn, a tranquil name for a very unsettled place. This is Usama Cannon.

SEVERSON: What’s happening to the human family, and more particularly families living in desperate situations, is an obsession of Rami Nashashibi, a Palestinian by birth. It’s why he started the Inner-City Muslim Action Network, also known as IMAN, 15 years ago. 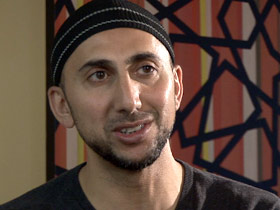 SEVERSON: IMAN is all about social justice, about providing basic quality-of-life services that make a community a community. It’s a big job even for a guy with a doctorate in sociology from the University of Chicago. Rami has traveled extensively and didn’t become a devout Muslim until he moved back home to Chicago’s South Side. This has always been a rough neighborhood. In the sixties it was white, blue-collar, and home of the Illinois KKK. When Martin Luther King Jr came here in 1966, he and 30 other protesters were injured in a hail of rocks, bottles, and firecrackers. Today the community is much more diverse. The KKK is gone. Now it's gangs and poverty. Few people understand the 'hood more than Rafi Peterson, who converted to Islam while doing time for murder. He was one of the first people Rami hooked up with.

RAFI PETERSON: In a neighborhood like this there’s nice homes, as you see, but it’s also the epicenter of the foreclosure market. There’s no unemployment--I mean there’s no employment. There’s no youth jobs. They’ve got over 88,000 young people in this community, and there’s not one youth center. That’s not the same over on the North Side. 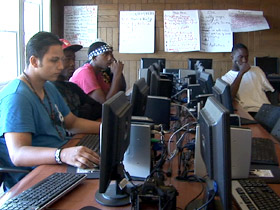 SEVERSON: So IMAN started it’s own small version of a youth center. Shamar Hemphill, in charge of youth programs, calls it a center of peace.

SHAMAR HEMPHILL (Youth Director, IMAN): In a neighborhood that’s filled with senseless violence, activities, the threat of gang activity, heavy police presence, we feel that the young people on the South Side of Chicago, specifically the Chicago Lawn neighborhood, needs a safe space, an environment where they can grow, develop.

SEVERSON: The kids come in all colors, from all persuasions.

HEMPHILL: No, no proselytizing. Everything is done through our actions. We want to show as Muslims that we’re compassionate, where mercy is part of the prophetic model. That, you know, wherever we are we should serve, and we should serve at the best of our actions. We definitely believe that. That’s a huge part of our faith.

M. ALTAF KAISERUDDIN, M.D. (Medical Director, IMAN): I’ve had people walk in with, you know, just being bitten by a dog, or just being shot or just being stabbed. Yes. we’ve got that. 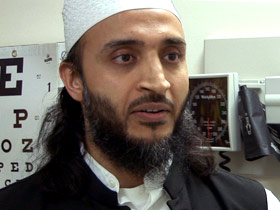 SEVERSON: It’s a Muslim-run clinic for patients of all faiths, many whose only other recourse is to go to an emergency room. The clinic started at half-a-day a month; now it’s five days a week, soon to be seven.

DR. KAISERUDDIN: Our population tends to present a little bit later, meaning they come in with a little more advanced stage of disease, because most of the time they didn’t know that they had any type of outlet or any type of access that they could get treatment.

SEVERSON: Because many convicts convert to Islam, those who’ve served time are of special interest to IMAN. One program is called Green Reentry, where volunteers, usually ex-cons, build ecofriendly houses for other formerly incarcerated. Rafi Peterson heads the program.

PETERSON: The average statistic shows that the average inmate in Illinois recidivate back within three years, 18 months actually. None of our brothers have went back.

SEVERSON: Hassan, who helped convert this house and now lives here, has been out of prison from a murder sentence for seven years. 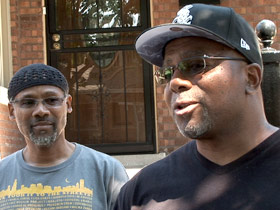 PETERSON: Our neighbors look at us not as problems in the community, but problem solvers. If something going on on this block, they either going to come and knock on his door, or they’re going to come ring my doorbell which is down the street.

SEVERSON: The home isn’t just for the asking. Much is expected from those who qualify.

SEVERSON: It’s working together with different faith groups in the community that really sets IMAN apart.

RABBI CAPERS FUNNYE (Beth Shalom B'nai Zaken Ethiopian Hebrew Congregation): I think IMAN is making a tremendous difference. This is an on-the-ground organization. They’ve made it a better community, and the little that they do turns into a lot. 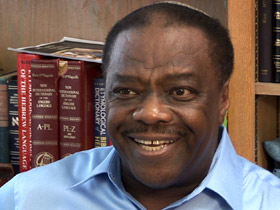 RABBI FUNNYE: He said, who are you? I said I’m Rabbi Funnye. And he said my name is Rami. I run an organization called IMAN, and he said, man, can I come inside? I said absolutely. So I brought him inside. He said, I’ve never been in a synagogue before. So he came in, and then he said, do you mind if I call you? I said not at all.

RABBI FUNNYE: He said rabbi, Ramadan is coming up and I was wondering if you would mind hosting the Muslims in this community in your synagogue for iftar. And iftar is the prayer we do before we break the fast of Ramadan. I said I don’t see why not.

SEVERSON: Earlier this year, after the Boston bombings, a Pew Research poll showed that 4 out of 10 Americans believe Islam is more likely than other religions to encourage violence among believers. The people here are very aware of that perception. 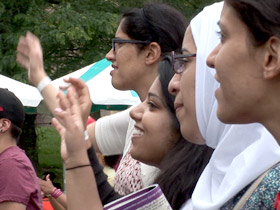 PETERSON: And If Islam is our way of maintaining our dignity and our self-esteem as men and coming back and being good husbands to our wives, good fathers to our children, then maybe America needs to look at it.

NASHASHIBI: Do I believe that there’s a problem with some sectors of the community that are vulnerable and susceptible to violence? Absolutely. I wouldn’t deny that. Do I believe that some of those who carry out, like in the Boston situation, then find ways of thinking about their faith as a context to justify that? Absolutely. I think the largest antidote, cure if you will, to any concern about radicalization and violence associated with it is meaningful, critical engagement.

SEVERSON: It was violence that eventually led Dylan Hall to IMAN.

DYLAN HALL: I used to be a high school teacher on the West Side of Chicago, and one of my students was shot and killed, and it was a very difficult experience.

SEVERSON: After a lot of soul-searching he converted from Catholicism to Islam.

HALL: Part of the thing that I like about Islam is that it forces me to engage with people of Christian faiths, because that’s where I come from and just try to change their perspective as well and just say this isn’t necessarily a violent religion.

SEVERSON: He was supposed to be receiving his MBA diploma from the University of Chicago on this day, but chose instead to volunteer for IMAN’s Takin’ It to the Streets 15th annual festival. It’s become a Chicago tradition drawing entertainers from all over the world and giving the public another view of Islam.

SEVERSON: IMAN has become a model for Muslims working within the community and with other faith groups. There are now similar programs in other U.S. cities, and Rami has become an important voice to many in the Muslim world.

“Do I believe there’s a problem with some sectors of the community that are vulnerable and susceptible to violence? Absolutely. I wouldn’t deny that…The largest antidote, cure if you will, to any concern about radicalization and violence associated with it is meaningful, critical engagement.”