SAUL GONZALEZ, correspondent: Hours before it opens each morning, a line forms in front of St. John’s community health clinic in the heart of South Los Angeles. The people who come to this government-supported health center are some of L.A.’s poorest and sickest residents, and most are uninsured. They turn to this place because if they can’t pay they’ll still be seen and treated.

Do you have insurance?

Yvonne Ivory: No, I don’t have any insurance.

Gonzalez: You don’t have insurance?

Gonzalez: When’s the last time you had it?

Ivory: Two years ago, when I lost my job.

Oswald McFadden: I don’t have insurance.

McFadden: Just trying to not get sick.

GONZALEZ: If the Affordable Care Act, better known as Obamacare, works, it’s the patients at St. John’s clinic, and millions more like them across the country, who are among those who are supposed to benefit the most.

Jim Mangia is the president and CEO of St. John’s. He says Obamacare’s importance can’t be underestimated. 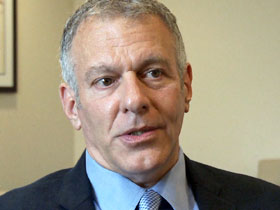 JIM MANGIA (President and CEO, St. John’s Well Child & Family Center): There’s no doubt in my mind that it’s one of the most significant pieces of social legislation we’ve seen in more than a generation.

GONZALEZ: It’s up there with Social Security?

GONZALEZ: If all goes according to plan, Obamacare will expand health care coverage to over 25 million people over the next decade. It will do that in two ways. First, through a big expansion of Medicaid, the state and federal health coverage program for low income individuals and families. Individuals with incomes up to 133 percent of the U.S. poverty line will now be able to qualify for Medicaid coverage at no cost to them. Second, for those making more, Obamacare creates new health insurance exchanges where individuals and families can purchase coverage from a menu of insurance plans offered by private insurers. People can begin enrolling in these policies on October 1, with the coverage kicking in on January 1 of the New Year. Premium subsidies will be available for those with incomes up to 400 percent of the federal poverty line. Many uninsured who qualify for the marketplaces but don’t purchase a plan will face a financial penalty, or tax. That starts at a minimum of $95 per year in 2014, but will rise to a minimum of $695 in 2016. Obamacare’s many provisions, especially the mandate to buy insurance, have sharply divided Americans for years, including people of faith. 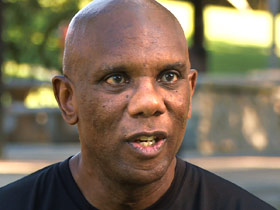 GONZALEZ: Art Cribbs is the executive director of Clergy and Laity United for Economic Justice (CLUECA), an interdenominational California group supporting Obamacare. Cribbs is such a strong proponent of good health he invited us to talk to him after his morning workout. To Cribbs, supporting Obamacare goes beyond nitty-gritty health and public policy issues. It’s a matter of morality.

CRIBBS: That is what Obamacare is all about: taking care of those who are among us, for whatever reason, who are unable to care for themselves in terms of their physical condition, in terms of their health and their medicine. As a person of faith if I am to turn my back on people who have needs, medical needs, physical needs, I have turned my back on my faith. That’s the bottom line.

GONZALEZ: Of course, many other people of faith don’t share such views on Obamacare. 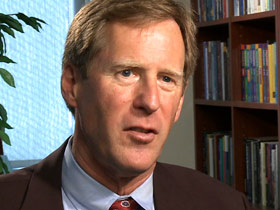 PROFESSOR SCOTT RAE (Philosophy of Religion and Ethics, Biola University): The parts that make me nervous about it, particularly from an ethical perspective, is the mandate that people have to buy insurance coverage.

GONZALEZ: Scott Rae studies the intersection of Christian ethics, economics, and health policy at Southern California’s Biola University, an evangelical campus. Rae worries about the estimated $1.1 trillion cost of Obamacare as it expands coverage to more of the poor. He also believes Obamacare takes too much authority out of the hands of individuals and gives it to the government.

RAE: Any time government steps in and tells people what they can and cannot produce on the production side, and can and cannot consume on the consumption side, assuming that there is not significant amount of harm coming from those choices I think that is in general, I think, a movement in the wrong direction.

GONZALEZ: As Obamacare rolls out, so too does a big, national, expensive campaign of public persuasion. Its message is pretty simple: health care reform will be good for the country. And when it comes to getting medical insurance there’s no excuse not to get any.

One big target of the effort will be healthy, but uninsured Americans in their 20s and 30s. Dubbed “young invincibles,” their participation in health care reform is considered vital to offset the cost of covering older and chronically ill people buying insurance. To woo them and others, the federal government and individual states will spend hundreds of millions of dollars explaining and selling Obamacare in the coming months, with a variety of different campaigns.

In Minnesota, the focus is on humor and turning Paul Bunyan into an Obamacare pitch man. 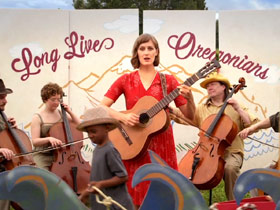 In Oregon the thrust is folksy and appeals to state pride.

California is taking a more soft-sell approach. California, with the largest population of uninsured in the country, says it will be the most aggressive state when it comes to implementing and marketing Obamacare…

...spending $150 million on a multilingual media and outreach campaign.

GONZALEZ: California’s also hosting old-fashioned town hall meetings across the state to explain the details of health care reform to its citizens.

Lee: “So rates are based are how old you are, where you live, and your household size. And then the choices you make: Which health plan do I want? That’s how rates are going to be based.”

GONZALEZ: Faith communities are also being recruited to spread the word about Obamacare. 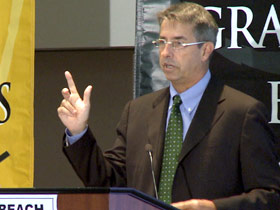 CRIBBS: We’re already doing it. We’re in churches. We’re in mosques. We’re in masjids, temples, and synagogues. We’re in faith communities across the country talking to people about this opportunity to make sure that they and their neighbors have access to affordable health care.

GONZALEZ: Then there’s all the Obamcare-related hiring going on.

GONZALEZ: Howard Kahn is the CEO of L.A. Care, a Los Angeles-based public health plan that expects huge growth under Obamacare as it offers health insurance plans to more people. LA Care’s downtown Los Angeles office tower is filled with floor after floor of operators all trained to sign up new applicants for Obamacare insurance programs.

KAHN: So today, L.A. Care covers about 1.2 million people. Through Obamacare, both the medical expansion and Covered California, I would assume we will serve at least another of a quarter of a million people, another 250,000 people, over the next year and half or so. 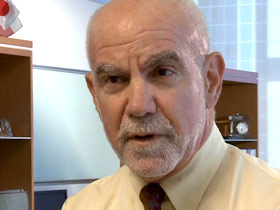 GONZALEZ: But even as Obamacare moves closer to full implementation, opposition to it continues. In Congress, many Republicans are still calling for a halt or outright repeal of the law.

Many states have announced they won’t participate in the expansion of Medicaid, and several more are leaning against it.

And to influence public opinion, conservative political groups have launched their own media campaigns to attack Obamacare. This one, targeting young people, is produced by Crossroads GPS.

Public Service Announcement excerpt: “Yeah, you work out, stay healthy. But come on, bro’, someone’s got to pay for people who smoke, drink 85-ounce sodas, and live in a Barca-lounger.”

GONZALEZ: And even after it’s fully implemented, critics say a public backlash could still kill Obamacare.

RAE: It wouldn’t surprise me if it failed, and we reverted back to market-based solutions either.

GONZALEZ: To what we have now? 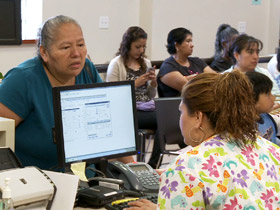 RAE: Perhaps even more market-based than we have now.

GONZALEZ: Even ardent supporters of Obamacare acknowledge possible problems with it because of its size.

KAHN: We’re working with 17 to 18 percent of the US economy, the biggest economy of the world. It’s very complicated, and there will be slip-ups.

GONZALEZ: Others worry Obamacare isn’t big enough. For instance, even when fully implemented, an estimated 30 million people in the United States will still be uninsured. They range from the undocumented to people living in states not participating in Medicaid expansion. Finally, there’s a feeling in the health care community itself that there’s much more to learn about Obamacare as the clock ticks down its full unveiling. At St. John’s health clinic, pediatrician and medical director Mimi Choi admits she doesn’t know enough about health care reform.

DR. MIMI CHOI: I would say I don’t know everything; I am learning pieces here and there for sure.

GONZALEZ: It is overwhelming?

CHOI: Totally. Totally. There are so many moving pieces, there are so many arcs and large programs coming into existence that it is overwhelming to try to get a grasp of everything and how it’s going to affect our practice especially.

GONZALEZ: In St. John’s crowded waiting room, there’s little talk about Obamacare and the arguments for and against it. People here just want to know when they do get sick, some place and someone will be there to help and heal them.

“As a person of faith, if I am to turn my back on people who have needs, medical needs, physical needs, I have turned my back on my faith,” says Rev. Art Cribbs, executive director of Clergy and Laity United for Economic Justice. But Biola University religion and ethics professor Scott Rae believes Obamacare takes too much authority out of the hands of individuals.

Health Care Costs and the Elderly

Health Care and the Common Good

The Aim of Health Care