FRED DE SAM LAZARO, correspondent: Slums like this one in Pakistan’s commercial capital, Karachi, are the home stretch of one of history’s most extensive disease eradication campaigns. Polio cases—tens of thousands a decade ago—number just a few dozen today. But in Pakistan, one of just three countries where the virus remains endemic, the campaign has stalled if not gone backwards. It’s especially frustrating since neighbor India—with similar urban slums and crowded unsanitary conditions that expose children to the paralyzing virus—India was declared polio-free in 2012.

DR. ANITA ZAIDI: The fact that they’ve done it is what makes me think that we can do it. If you can put enough boots on the ground and do high-quality campaigns—because if India can do it, Pakistan can do it.

DE SAM LAZARO: Dr. Anita Zaidi says it hasn’t because of a perfect storm: epic floods, political turmoil, and religious extremists who’ve fought the campaign with guns and rumors. And there was one more setback: the hunt here in Pakistan for Osama bin Laden, in which the US Central Intelligence Agency ran a fake vaccine campaign to gather DNA samples. 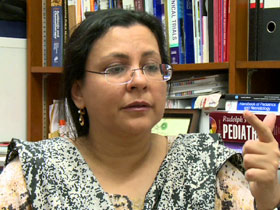 ZAIDI: Which has hugely damaged public health programs, not only in Pakistan but in many, many countries, because people ask all kinds of questions. They now think that the vaccine programs might actually be spy operations.

DE SAM LAZARO: The perceived violation of Pakistani sovereignty in bin Laden’s capture, the continuing drone attacks targeting militants have made the US deeply unpopular here. And it's helped extremists, who’ve long fueled a rumor that the polio campaign is a plot against Muslims. Businessman Aziz Memon is with Rotary International, which has spent $1.2 billion over the past two decades and led the global polio effort. He says Taliban militants have stepped up their anti-vaccination efforts.

AZIZ MEMON (Rotary International): They issued a ban on polio immunization, which is today also existing. These are the same people who at one time were rejecting it on the basis that it is going to make that child infertile. 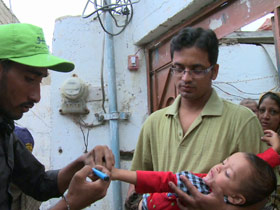 ZAIDI: The Council of Islamic Ideology now has a very active program, and there is a declaration that the Council of Ulemas has made that says that the polio vaccine is effective, that it’s not harmful, and it is allowed by Islam and that Muslim children can have it.

DE SAM LAZARO: Muhammad Hanif Tayyab helped author the document, which is being distributed to mosques across Pakistan.

MUHAMMAD HANIF TAYYAB: (through translator) They will go and explain to the people, “Look, in the rest of the Muslim world, in Iran, in Saudi Arabia, this crippling curse has been eradicated. Why is it that we cannot eradicate it from our country?”

DE SAM LAZARO: The declaration or fatwa by top leaders has enabled local imams like Bilal Ahmed to tell his congregants, most of them not literate, that receiving the vaccine is not haram, or sinful.

IMAM BILIL AHMED: (through translator) People come to me and ask if it is haram, and I say you've been taking English medicines all your life, and none of them are haram. So why would this one be?

DE SAM LAZARO: That may increase public acceptance of the vaccine. But it hasn’t made life any safer for vaccinators. At least 22 have been gunned down in the past year or so. 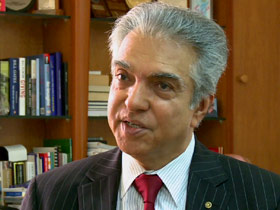 MEMON: Polio workers, they love to target them not just because of polio, but because touching a polio worker makes news. They know that. I'll give you one example...

DE SAM LAZARO: You mean they’re after the publicity?

DE SAM LAZARO: Who exactly is after the publicity?

MEMON: These Taliban groups...so you know this becomes quite an international news also.

DE SAM LAZARO: In Karachi, workers we spoke to—paid about $5 a day—said they were undeterred.

First Male: (through translator) The security situation is tough all over the country, but this is something we have to do for the children.

First Female: (through translator) This disease cripples children, not just for a day but for their entire lives, and it affects the whole family.

Second Female: (through translator) This is important. As women health workers, it is our job to help kids. Polio teams are being attacked, but this is something we have to do. 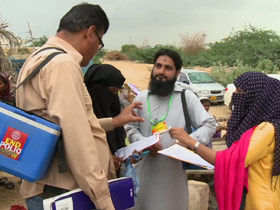 DE SAM LAZARO: They fanned out across city neighborhoods, sometimes accompanied by armed policemen, which has not prevented some attacks. Difficult as it is for vaccinators to work in the cities, it’s becoming virtually impossible in the north and northwest of this country, near the Afghan border. Extremist militant leaders there have declared the polio campaign off limits.

For now the polio eradication campaign has targeted children on buses to and from the no-go regions. Dr. Zaidi says this will, at best, contain polio, not wipe it out. To do that, she says Pakistan’s military will need to take on the militants to allow vaccinators safe access.

ZAIDI: If you look at the number one problem of Pakistan right now is terrorism. I mean polio is just a byproduct of this issue right now. The central issue is fighting terrorism, and if you address the security situation, the polio problem will automatically be addressed.

DE SAM LAZARO: But there’s yet one more complication that we saw workers encounter in the Karachi slum: public ambivalence. Even as they urged parents to bring children out to get the vaccine drops, even as people in this community introduced us to polio victims who live here, it's not clear if all of the children were immunized. Vaccinators say they got a little bit of resistance to the polio campaign, but they mostly got complaints. It’s about to rain, and their shelters are flimsy. There’s no clean drinking water, no sanitation, no schools. For millions of Pakistanis who live in conditions like these, polio is hardly the most pressing concern.

Some health professionals and political leaders also feel Pakistan has more pressing problems. After all, education, clean water, and sanitation would remove conditions that spread the polio virus. But those are long term solutions. Polio campaigners say a comprehensive strategy to simply get drops to all children could wipe out the scourge much sooner. It would also remove the stigma Pakistan endures internationally as an exporter of the virus. Dr. Zaidi says it’s outside pressure driven by that concern—and a religious imperative—that could finally propel Pakistan to act.

ZAIDI: I think the main source of external pressure is going to come from Saudi Arabia, because they are going to be very concerned about the hajj acting as a magnifier and multiplier of polio cases all over the world. If we don’t get our act together, they may easily say no Pakistanis for hajj and umrah. And it might just come to that.

DE SAM LAZARO: For now, among the millions who travel to Mecca for the annual hajj and umrah pilgrimages, Pakistanis must prove they’ve been vaccinated for polio. And even if they have, they must take yet one more dose on arrival in Saudi Arabia.

For Religion and Ethics NewsWeekly, this is Fred de Sam Lazaro in Karachi, Pakistan.

The polio virus has been eradicated in most of the world, but Pakistan is one of the few countries where it is still a problem. Programs to vaccinate children have been hampered by suspicions about the purpose of the vaccinations, religious concerns about the vaccines, violence from extremists, and critics who say Pakistan has more pressing problems to deal with.