KIM LAWTON, correspondent: In Los Angeles, it’s just after noon on Friday, the day Muslims gather for their weekly jummah prayer service. But as the traditional call to prayer echoes, something very non-traditional is taking place: it’s being given by a woman. This is the Women’s Mosque of America, believed to be the first female-only mosque in the US. Here, women have all the leadership roles of the service and make-up the entire congregation.

LAWTON: American Muslim women say they can feel marginalized at worship services in traditional mosques. Only men are allowed to lead the prayers and preach the sermons. Women are usually seated in separate areas, often away from the main part of the sanctuary. 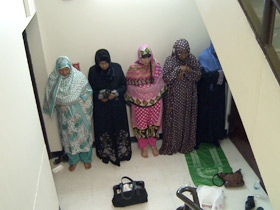 PROF. RUQAYYA KHAN (Claremont Graduate University): It’s often either to the side or small, not well ventilated, maybe visual access to the Imam is not very good. In the United States, the mosque has been not, I’m just going say, not an optimal space for Muslim women.

LAWTON: Professor Ruqayya Khan is chair of the Master’s Program in Islamic Studies at Claremont Graduate University. She says many US mosques are still organized around the centuries-old cultural traditions of the immigrants who established them.

KHAN: Generally the mosque has been a male space, gendered male. It wasn’t that women weren’t allowed to go to the mosque, but they weren’t encouraged to go.

LAWTON: For some women, this has created a barrier to practicing their faith.

NIA MALIKA DIXON: I didn’t always feel comfortable because of the atmosphere being very much male driven and the community involvement is very much limited.

LAWTON: As several prominent Muslim women in Los Angeles discussed the problem, the idea emerged of creating a mosque exclusively for women. There are a few similar mosques in other parts of the world. The Women’s Mosque of America launched earlier this year. Muslim activist Edina Lekovic is on the Board. 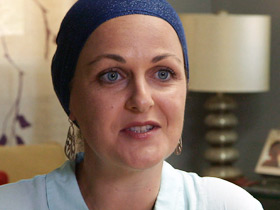 EDINA LEKOVIC (Women’s Mosque of America): Ultimately the goal is to empower women with the message of the Quran, and to increase their Quranic literacy, so that they can go back and serve their coed mosques.

LAWTON: The Women’s Mosque holds its jummah prayers at the Pico Union Project, an interfaith space that was founded as a synagogue. The female-only jummah services take place once a month and follow a traditional format, starting with the call to prayer.

ANDRABI: I’ve never even thought that a woman could give it. I haven’t felt sad about that or oppressed or anything. But hearing it by a woman was amazing, and it was really liberating.

LEKOVIC: From the moment that I heard the Call to Prayer from the mouth of a woman, I was elevated in a whole new way. I felt a spiritual connection to God that I haven’t felt, that kind of jolt, in a while.

LAWTON: The mosque has selected several prominent professionals from the community to deliver the khutbah, or sermon. Topics have included social empowerment, environmentalism and sex abuse.

KHAN: What’s really important is not just the fact that we have a woman at the pulpit, but she is invoking Islamic sources, using Islamic examples to make claims and arguments, to provide insights, that are really attuned to the realities of these women’s lives. 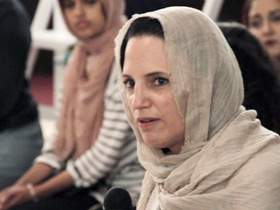 LAWTON: Laila Al-Marayati, an OB-GYN doctor, was one of the preachers.

DR. LAILA AL-MARAYATI: Every one of us reads the text through a different lens from the perspective of where we are in our personal lives, historically. And women read the Quran differently than men do. The verses will appeal to us in different ways. By not having women talking about it, you’ve eliminated half of your community and what their perspective could be.

MAHA AWAD (Women’s Mosque of America): Sometimes it’s a different perspective, sometimes it’s even the same perspective as if, as had a man given the khutbah, or the sermon, but it’s just, it’s just so nice to hear. There’s a certain relatability and there’s a certain connection, I think, that I personally feel when I hear a fellow sister really giving us the khutbah.

LAWTON: After the service, there’s a time where the women can discuss their reflections about the sermon or share their own experiences, something that likely would not happen in a coed setting. Many say they’re spiritually enriched by it. Some who have been alienated from other mosques have been inspired to return to Friday services.

DIXON: I honestly didn’t really feel less Muslim because I wasn’t going to the mosque, I didn’t feel like I was less connected to God. I was missing that sense of community.

LAWTON: The Women’s Mosque describes itself as an inclusive middle ground that welcomes people from all perspectives. 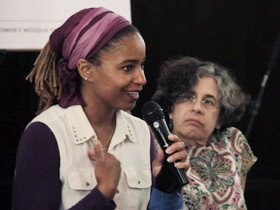 LAWTON: That includes women of other faiths who may not feel comfortable visiting a traditional co-ed mosque. For Debra Linesch, who is Jewish, this was her first Muslim worship service.

DEBRA LINESCH: You go to a service of another tradition and you don't know am I supposed to stand, am I supposed to kneel, am I supposed to put my forehead to the floor? And...I just did it. I kinda surrendered to what the women, the kind of holistic experience of these women...it felt terrific. It felt honest.

LAWTON: Within the broader American Muslim community, reactions to the Women’s Mosque have been generally positive. But there has been some criticism. Some question whether it’s appropriate for women to be taking such leadership roles.

Professor Khan says there is nothing specifically in the Quran about the gender of those who may lead prayers. And she says other traditional Islamic texts do allow for women leading women. 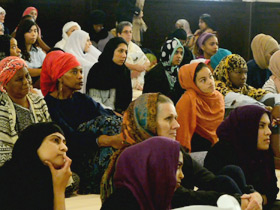 AL-MARAYATI: Women have for a long time felt shut out from mosques everywhere. And so instead of trying to argue against whether this women’s mosque should exist or not, they should really be looking at their own communities and wondering how they can make them a more welcoming place for everyone.

LAWTON: Other Muslim leaders have raised concerns about segregating a particular segment of their community. They worry that other groups could breakaway or that women could be encouraged to abandon local mosques altogether.

Leaders of the women’s mosque say it’s just the opposite.

AWAD: It was never intended to be an alternative. It’s a complementary space for women to find their voices and then take that experience and then go back to coed mosques, go back to whatever institutions that they belong to and feel more empowered to use their voices.

LAWTON: Khan admits she too is troubled by the notion of a segregated mosque. But she also believes this could have a significant impact on the larger Islamic community.

KHAN: What’s really amazingly powerful is the reach beyond the physical space, through the use of social media. So they’ve got Facebook, they’ve got Twitter, they’ve got YouTube.

LAWTON: Lekovic sees the Women’s Mosque as a continuation of the legacy of Muslim women.

LEKOVIC: If we go back to the Quran, that it’s our responsibility to step up. Instead of waiting for permission, we have to step outside of our comfort zone and take on new responsibilities that might be unfamiliar, uncomfortable, even might challenge the norms. But that that’s good for us and good for the community and good for our relationship with God in the process.

LAWTON: And she says it’s their responsibility to pass that legacy on to the next generation.

LEKOVIC: When I think today about my own daughter and that a women’s mosque is just going to be normal in her life and in her vocabulary, that to me is overwhelming. And I think that that’s really a testament to where we’re at as a community and as a faith today.

American Muslim women can feel marginalized at worship services in traditional mosques. Only men are allowed to lead the prayers and preach the sermons, and women are usually seated in separate areas. But at the new Women’s Mosque of America, believed to be the first female-only mosque in the U.S., women are in charge, and participants hope to influence the larger Muslim community to be more inclusive.