BOB ABERNETHY: As we reported, the U.S. Catholic bishops had their annual fall meeting this week in Baltimore. One observer was Father Tom Reese, a long-time authority on the Church and senior analyst for National Catholic Reporter. Father, welcome.

ABERNETHY: I also want to talk to you about the legacy of President Kennedy and what that has meant for the Church. But let’s begin with the bishops. Pope Francis says be more pastoral. Were there any signs at this meeting that the U.S. bishops are becoming more pastoral?

REESE: Well, certainly the agenda that the bishops covered in their meeting was not a pastoral agenda.

ABERNETHY: And what does it mean to be pastoral? 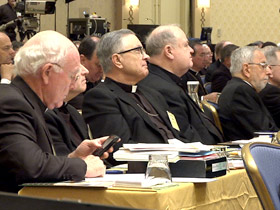 REESE: Well, only about 4% of American Catholics have a negative view of Pope Francis; these are incredibly numbers that people in Washington would kill for. But there are a small number of what I would call conservative elites—the people who want to focus on abortion, and gay marriage, and really want the Church to work with the Republican Party. Those people are unhappy because Francis wants a bigger agenda for the Church. 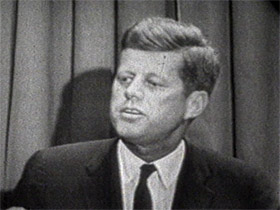 REESE: Well, I think that, for Catholics, the election of Kennedy was an important moment in history, where they were recognized and accepted by American society as true Americans. The only thing comparable in our time is the election of Obama and how that impacted the black American community. Up until this time, people thought that if a Catholic was elected president he would take orders from the pope and the bishops. And obviously, Kennedy did not do that. There was still anti-Catholicism. And it really wasn’t until he was assassinated that people no longer accepted anti-Catholicism in America.

ABERNETHY: You mean, the assassination—what, it made him a—sort of made him a…

REESE: It made him into an American martyr. It put him among the real heroes of American culture. And so that—and since he was a Catholic. You know, and afterwards, other politicians—Catholic politicians—ran for president and nobody cared that they were Catholic. Gene McCarthy, Paul Ryan today, Newt Gingrich—all of these people, when they ran, nobody made an issue out of the fact that they were Catholic. Even John Kerry.

ABERNETHY: The Catholics were part of the American mainstream—

REESE: Catholics were—Catholic politicians were no longer to be feared. It was no longer believed that they would take orders from the pope or the bishops.

REESE: Good to be with you again.

For American Catholics, “the election of Kennedy was an important moment in history, where they were recognized and accepted by American society as true Americans,” says Rev. Thomas Reese, S.J. But anti-Catholicism continued to linger until JFK’s assassination, when the 34th president became an American martyr, and it was no longer acceptable to be anti-Catholic.