BETTY ROLLIN, correspondent: The Metropolitan United Methodist Church in Washington, DC recently had an unusual celebration. The event, called “Church Quake,” honored married couples of the same sex and the clergy who married them.

Retired bishop Melvin Talbert was the first Methodist bishop to publicly endorse same-sex marriage, which is prohibited in the church’s Book of Discipline.

RETIRED BISHOP MELVIN TALBERT: (preaching) I felt the time had come for clergy to give leadership to their congregations and it’s time for clergy to refuse to convict their colleagues for doing the right thing.

ROLLIN: One of those colleagues, who is facing a potential church trial for performing a same-sex marriage, is 79 year old Rev. Tom Ogletree, the retired dean of Yale Divinity School.

The marriage that Rev. Ogletree performed was that of his own son, Thomas. 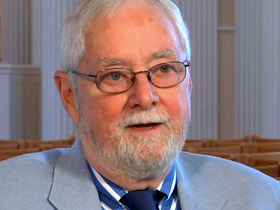 REV. TOM OGLETREE: I was thrilled that he asked me to play a role because I’ve known he was gay for a long time and we’ve been watching him, you know, adjust and adapt to the demands of the culture in creative ways.

ROLLIN: Since 1972 the Methodist Church’s Book of Discipline has stated that “the practice of homosexuality is incompatible with Christian teaching” and the book prohibits Methodist ministers from performing same-sex marriages. Rev. Ogletree knowingly violated the law and says he is proud of doing so.

REV. OGLETREE: I was inspired by Dr. King during my participation in the Civil Rights Movement when he said that an unjust law is no law. These are unjust laws, and therefore they do not really have the authority of law, even though technically they are established in the discipline.

REV. ROB RENFROE (Woodland United Methodist Church): We can't all be a community and just decide that some laws are ones that appeal to us, others we think are unreasonable and we can go do whatever we want to without there being some kind of repercussions. 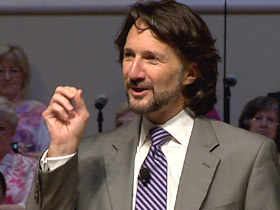 ROLLIN: Reverend Rob Renfroe of the Woodland United Methodist Church near Houston is one of many members of the Methodist clergy with a different view—a view that condemns the practice of homosexuality in general.

REV. RENFROE: There is not any passage in scripture that is condoning or accepting of that practice. That's why those of us who see the Bible as God's word say we have to be true to what the Bible teaches when it's clear, when it's unmitigated, then it's really a matter of whether or not we will be faithful to what God has revealed.

ROLLIN: Rev. Ogletree, who is a scholar of Christian ethics, feels that the Bible is often misinterpreted.

REV. OGLETREE: If you look carefully at the scripture you’ll find it has no concept of homosexuality or sexual orientation at all. And if you learn to read it in context and see the evolving traditions as we try to interpret it, then you realize that that’s an oversimplified reading. After all, the scripture seems to accommodate slavery. So should we then have slaves? They say women should be subordinate to their husband. Then let’s tell women to shut up and stop talking to us, especially in public. The point is when you only select certain texts that support your prejudices, then you’re not reading the scripture seriously.

REV. SCOTT SUMMERVILLE: (preaching) Will the congregation please rise? I invite us now to be in a spirit of prayer...

ROLLIN: Reverend Scott Summerville is pastor of the Asbury Crestwood Methodist Church in Tuckahoe, New York. He, too, is critical of the law and feels that the Methodist church’s stance on gay marriage is hypocritical.

REV. SUMMERVILLE: (preaching) "You can worship here, love to have you, but frankly you can never be fully 100% one of us. There must always be a distinction between us, you see our rule book demands that we make this distinction whether we wish to or not, but we love you." 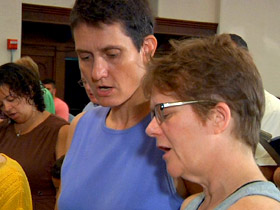 ROLLIN: Dorothee Benz and Carol Scott married in Rev. Summerville’s church. Dorothee is the director of Methodists in New Directions—MIND—which has mobilized Methodist clergy who support and have agreed to conduct same-sex marriages.

DOROTHEE BENZ (Methodists in New Directions): We have basically found a way around the paralysis that’s caused by the church’s requirement to discriminate, which is we’re just not discriminating anymore. What the church does through its discrimination and prejudice has a wider effect. It gives moral cover to people who vote against us in legislatures; it gives moral cover to queer bashers who bash us in back alleys, so the effect is huge.

ROLLIN: At one point Dorothee wanted to become one of the clergy herself but could not because of her homosexuality.

BENZ: You sit in the pew. You’re not allowed to get married there, you’re not maybe not even be a member there. What are you learning about yourself that God supposedly thinks about you and certainly that your fellow churchgoers and leaders think about you? That’s a terrible message.

CAROL SCOTT: Because that message is not only going to the queer folks who are sitting in the pews feeling excluded and discriminated against and hated. That message is going to the straight people who are sitting there, to the kids down in Sunday school who are growing up learning all of these people are less than, don’t deserve as much as, or not equal, or whatever. 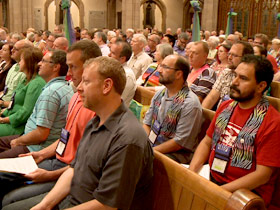 ROLLIN: But Rev. Renfroe feels that those who accept homosexuality in the church are just giving in to the politically correct view.

REV. RENFROE: I'm afraid that the church will give into the culture, I'm afraid that the church will sell it's birthright for a mess of porridge, that we will try to please a culture that is not really interested in the Gospel of Jesus Christ, thinking that if we make little changes so that we appear to be warm and accepting, that they'll come our way.

ROLLIN: The Methodist church is losing membership in the United States and gaining conservative members internationally, especially in Africa where homosexuality is frequently reviled.

REV. RENFROE: The church where it's most liberal is declining most rapidly, so the number going to represent a progressive point of view will be even fewer in 2016 than it was in 2012. Where the church is most conservative is where the church is either the most stable or it's the most growing, so the numbers simply are not in favor of changing our position in the discipline.

ROLLIN: Meanwhile, Rev. Ogletree’s trial is pending and could be dismissed.

REV. OGLETREE: I believe that the Methodist Church is open to change here. And that it’s important then to join the people within the denomination who want that change.

ROLLIN: And those on his side of the issue have some hope about amending the Book of Discipline.

BENZ: The Book of Discipline starts with a preamble that acknowledges the church’s past failings and we are hopeful that maybe someday there’s a new passage in there, so I mean, it’s possible.

ROLLIN: But the next opportunity to change the Book of Discipline won’t be until 2016, when the worldwide church gathers at the Methodist General Conference. For Religion & Ethics NewsWeekly, I’m Betty Rollin in Washington, DC.

The United Methodist Church’s Book of Discipline states that “the practice of homosexuality is incompatible with Christian teaching,” and it prohibits Methodist ministers from performing same-sex marriages. But “these are unjust laws,” says Rev. Thomas Ogletree, “and therefore they do not really have the authority of law.”