KIM LAWTON, correspondent: In Lake Junaluska, North Carolina, Bob and Diane Gayer and their sons Jarek and Clay are doing a little Christmas shopping. Not at the mall...at their church! Long’s Chapel United Methodist Church sponsored an Alternative Christmas Market, where various booths offered gift ideas that supported local and international charities. Diane says projects like this help her family set a different tone for Christmas.

DIANE GAYER: It's a very tricky time for the family.

DIANE GAYER: It is expensive, and we live in a real "me" society so the children always think of themselves first. And as a parent, you want them to think of others.

LAWTON: The tradition of giving Christmas presents is often tied to the magi, or wise men, who according to the Bible story brought precious gifts to the baby Jesus. But many Christians say that tradition has gotten out of hand. According to the National Retail Federation, Americans will spend $563 billion for Christmas 2012. The average family is expected to shell out about $750. The federation also forecasts that this holiday season, consumers will be spending the highest amount ever on gifts for themselves. Amid all the shopping frenzy, more and more church leaders are speaking out against self-indulgence and consumerism. 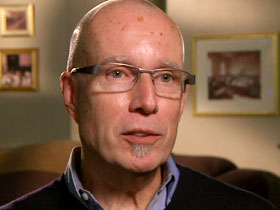 REV. MIKE SLAUGHTER (Ginghamsburg Church): It’s kind of hijacked the whole idea that Christmas is about Jesus’ birth and honoring Jesus with the priorities that Jesus would have in the world, especially amongst marginalized people. But what we’ve done is made it more about us, and it’s become kind of one of the biggest, gluttonous feast days on the Christian calendar.

LAWTON: Rev. Mike Slaughter is lead pastor of Ginghamsburg Church outside Dayton, Ohio, and author of the book, “Christmas Is Not Your Birthday,” in which he urges people to consider what Jesus might like for his birthday.

LAWTON: To that end, for the last eight years, Slaughter has issued a Christmas challenge to his congregation: 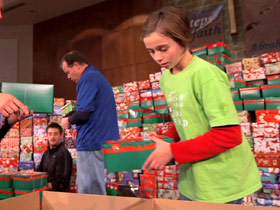 SLAUGHTER: We’ve simply said whatever you spend on yourself, bring an equal amount for a focus we have in our community or the world.

LAWTON: Through what they call the Christmas Miracle Offering, the church has built 243 schools and 19 clean water facilities in Darfur and a health clinic in South Sudan. He says children have been among the most enthusiastic supporters.

SLAUGHTER: That’s one of the things that surprised me the most. I really thought we were going get pushback from kids, that kids would not understand this. And what happened was the kids began to worry that if they got presents, other children would die. I was shocked.

LAWTON: The church also supports several projects to help the local community, which has been hard hit by the economic downturn. There are GED programs, jobs programs, and food pantries. Marcia Florkey directs the church’s outreach ministry called New Path.

MARCIA FLORKEY (New Path): We've been really blessed because we have a lot of folks here who are really concerned about their neighbors, who really want to do all they can do to love their neighbors. 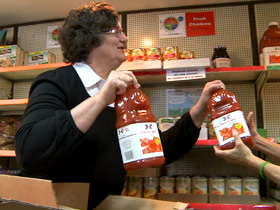 LAWTON: In recent years, several international humanitarian organizations have been sponsoring projects to help others at Christmas time. For example, through Operation Christmas Child, Samaritan’s Purse urges people to pack shoe boxes of gifts for needy children. Since 1993, the group says it has delivered more than 100 million boxes around the world. Now, more local churches are also calling for a new, more spiritual look at Christmas gift-giving.

CARDINAL DONALD WUERL (Archdiocese of Washington): (in video) Come and experience the joy and peace of Christ—the perfect gift at Christmas. Merry Christmas.

LAWTON: The Roman Catholic Archdiocese of Washington has an initiative called “Find the Perfect Gift.” The United Methodist denomination has launched a million dollar campaign called “Reclaim Christmas.” In Lake Junaluska, Pastor Chuck Wilson wanted Long’s Chapel to be part of it. 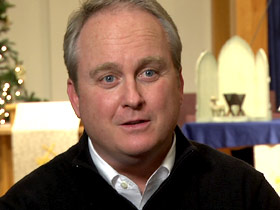 REV. CHUCK WILSON (Long’s Chapel United Methodist Church): We know that we're not going to completely debunk American consumerism. But we do encourage great participation by just placing before our people dozens and dozens of opportunities for giving.

LAWTON: Many of those opportunities were represented at the alternative market in the fellowship hall. Families like the Gayers could buy fair trade coffee and chocolate to benefit United Methodist relief efforts. Or they could give a donation in someone’s honor to build wells in Africa. At one table, members of a church missions team sold purses made by a woman they met who runs an orphanage and school in Kenya.

JULIANNE WILSON (Long’s Chapel United Methodist Church): It's really neat when people come over here and buy them. And they can give them as gifts. So, you know, this is going all the way to help some kid maybe have lunch or breakfast or get an education.

LAWTON: Eleven-year-old Jarek and his ten-year-old brother Clay both bought necklaces from a mission that works in Africa. 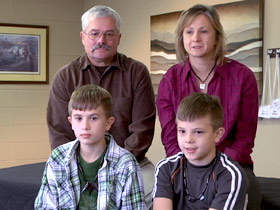 JAREK GAYER: It's a win-win for everybody because I really like this necklace, but the money goes to more…

CLAY GAYER: A good cause.

BOB GAYER: Jarek delivers gifts with me on the day that we deliver for Christmas Angels. And he gets to see that, you know, sometimes life isn't always as nice as he has it at home.

JAREK GAYER: It's fun but it's like, life-touching because it's like you know that, OK, I have all this stuff and when you go to the person's house, it's just like (makes a surprised face), Huh! It like, it just like touches your heart.

LAWTON: This year, Long’s Chapel also worked with the group Stop Hunger Now to pack meals that will be shipped overseas. In one afternoon, the church put together more than 10,000 meals for Haiti. Clay says for him, that’s the real meaning of Christmas.

CLAY GAYER: Christmas is not mostly about yourself. It's mostly all about giving.

LAWTON: Pastor Wilson says behind all their efforts is a desire to honor what they believe is the ultimate Christmas gift: Jesus coming into the world.

C. WILSON: We believe in this important kind of theological concept called the Incarnation, that God came and got with us. God brought himself in the person of Jesus and placed himself before us and came in the form of a child.

Amidst the holiday shopping frenzy, more and more churches are urging “alternative” Christmas giving. “Christmas is about Jesus’ birth and honoring Jesus with the priorities that Jesus would have in the world, especially amongst marginalized people. But what we’ve done is made it more about us,” says Rev. Mike Slaughter, Methodist pastor at Ginghamsburg Church in Ohio. He has also written a book called “Christmas Is Not Your Birthday.”