From “Old Jews Telling Jokes”: Three Jewish mothers are sitting on a bench minding their own business. Think about it.

BOB FAW, correspondent: So you want to know what is Jewish humor? You should be so lucky.

From “Old Jews Telling Jokes”: My wife likes to talk to me during sex. She calls me up and says, ‘Nathan, I’m having sex.’”

FAW: As they say in the show “Old Jews Telling Jokes,” now playing in Chicago, there are times when it’s kosher for Jews to be hams. 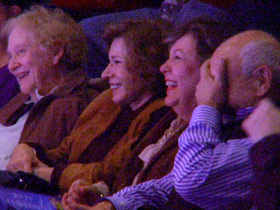 FAW: Audiences guffaw—or wince—at humor which is all about coping and which thrives in a Jewish culture where everyone and everything can be mocked.

COMEDIAN ALAN KING: If I walk into a restaurant and there is a sign “Food Like Mother Used To Make” I report them to the board of health.

COMEDIAN BUDDY HACKETT: If I wasn't a Jew I would be a Catholic. They do whatever they want, and then they confess they didn't do it.

COMEDIAN ROBERT KLEIN: (performing on stage) My gentile friends, I've been to far too many wakes. I feel so... Five days? Eight shows a day like vaudeville!

It’s a culture, and one of the huge parts of that culture is being funny, is comedy, is making fun, is again, not that other cultures don’t have that, but it’s big-time in this culture.

FAW: Jewish humor goes back to the Bible, says Harvard Yiddish scholar Ruth Wisse. Remember Sarah, finding out she was pregnant at around age 90?

PROFESSOR RUTH  R. WISSE (Professor of Yiddish Literature, Harvard University, and Author of “No Joke: Making Jewish Humor”): And her response is to laugh. 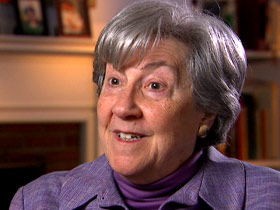 FAW: Wisse, who wrote a book about the history of Jewish humor, says that Jews, the so-called chosen people, subjected to centuries of persecution, have been laughing for centuries—at their oppressors, at the incomprehensible, at themselves.

COMEDIAN RODNEY DANGERFIELD: Let me tell you, my wife, she never went for me. The first time I called her up she told me, “Come on over, there is nobody home.” I went over. There was nobody home.

COMEDIAN WOODY ALLEN: In the past, whenever I had any sort of crisis I used to consult with my analyst. This is public knowledge. I was in analysis for years because of emotional problems that I had. I suffered from the delusion that I was short and thin.

Man singing in “Old Jews Telling Jokes”: "When life is bad and kicks you in the kishkas, show the world that you’re not going to take it lying down. Tell a little joke.”

FAW: From Roman times to the Holocaust, when hounded or despised, humor for Jews became a defense mechanism. Renee Matthews from “Old Jews Telling Jokes”: 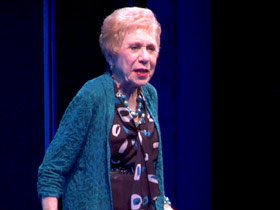 RENEE MATTHEWS: It’s our armor, you know. I’m going to laugh at this before you have a chance to poke fun at me. That’s been the Jew’s savior, I think, though generations. We can laugh at ourselves. So if you can’t do that then you’re a goner.

Doctor: How old are you, Mr. Shapiro? 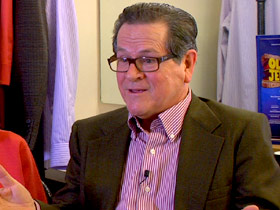 TIM J. KAZURINSKY: As somebody once said, “Tragedy plus time equals comedy,” and given that equation it fits right in. In terms of tragedy, the Jews have kind of got a headlock on that.

FAW: And that gulf between being God’s anointed and all that misery, says Ruth Wisse—that incongruity is at the core of Jewish humor.

FAW: Over the centuries, she says, Jewish humor has evolved, depending on what was happening to Jews. Their humor infused, in no small part, by the Yiddish theatre 100 years ago and what comedian and writer Robert Klein calls “those rhythms of funny” in Yiddish itself. 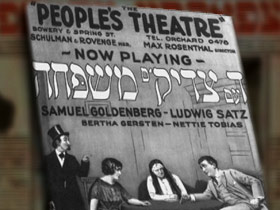 KLEIN: Yeah, I get a laugh on a whole routine of mine by going habda, habda, habda, without even using any words, just sort of imitating it.

FAW: Of course the flowering of Jewish humor was in the 1940s at scores of Jewish hotels in New York’s Catskill Mountains, the so-called Borscht Belt, the training ground for so many Jewish comics—Sid Caesar, Jackie Mason, Henny Youngman, Myron Cohen.

COMEDIAN MYRON COHEN: This adorable eight-year-old girl, quite like one you might have in your very own house, walked into a bakery shop and said to the baker, “My mommy found a fly in the raisin bread.” He says “so bring back the fly. I will give you a raisin."

WISSE: They were hired as waiters in their uncle’s hotel, and they were told “be funny,” because you have to keep the customers’ mind off the bad food and the bad conditions, and they cannot be allowed to ask why the pool isn't functioning today or something. Keep them laughing. So comedy became, you know, professionalized that way. 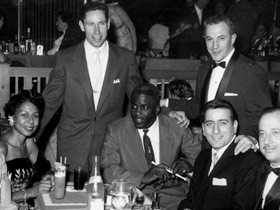 KLEIN: There's a joke: The waiter goes to a table of Jewish people and says, “Is anything alright?”

FAW: Robert Klein, now 71, was there in those balmy, wacky days starting at age 17 as a lifeguard in the Borscht Belt.

KLEIN: The comedian was the star. The guy would come in a Cadillac, and for 35 minutes peoples’ stomachs would hurt and their eyes tear, and they’d forget their disappointment in their marriage or their children or their health, and he’d go off to another bungalow colony or small hotel and do the same thing.

FAW: The Borscht Belt, where Jewish comics mastered both their razor-sharp barbs and exquisite timing, to tap into time and time again.

COMEDIAN ALAN KING: "For 49 years she never got off my father's back. You know, when my father got married he was six foot one. He's five foot two-and-a-half now."

FAW: There was also in their humor something both self-deprecating, then... 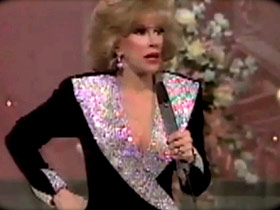 COMEDIENNE JOAN RIVERS: “I had a Jewish delivery, which they knock you out at the first pain and they wake you up when the hair dresser shows."

From “Old Jews Telling Jokes: A beggar came up to my mother on the street and said, “I haven't eaten in three days,” and my mother said, “Force yourself."

WISSE: I wonder whether in a sense the self-mockery isn’t saying, “Look at me. I can get to me much better than you can ever get to me.”

WISSE: “I can make fun of myself at such a level beyond anything you can say about me.” That, you know, “I’m immune to any criticism of yours.”

FAW: As this Off-Broadway show proves, Jewish humor—set in the everyday, championing the little guy, skewering the pompous—still thrives. 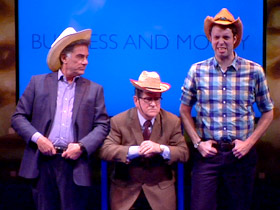 From “Old Jews Telling Jokes:”: The last time I came home, I found my business partner in bed with my wife. I said, “Jake, I have to—but you?"

WISSE: Really great humor makes you uncomfortable, because it reveals a truth which you could not otherwise reveal except in this humorous form.

COMEDIAN RODNEY DANGERFIELD: That is the story of my life. No respect. I don't get no respect.

FAW: So the punch lines may be ancient, but the laughter keeps on coming. What, better you should cry?

From “Old Jews Telling Jokes”: “It’s hard to stop ‘funny’ from spreading like wildfire. So who knows, maybe the world will turn out all right after all. It couldn’t hurt.”

FAW: For Religion & Ethics NewsWeekly, this is Bob Faw in Chicago.