JUDY VALENTE, correspondent: For two hundred years, since the time of pioneer homesteaders, the Sisters of Loretto have lived among the rolling hills of central Kentucky. They taught in rural schools and to this day farm and raise cattle on 700 acres of prime agricultural land.

SISTER MARIA VISSE: That word “trust,” I think, is what binds us to this land. This is what we’ve been entrusted with. And so, over the years, we’ve always tried to respect what the land gives.

VALENTE: The sisters would have liked to continue quietly caring for their land but for this—the process known as fracking, the hydraulic fracturing of bedrock followed by the forcing massive amounts of pressurized water, chemicals, and sand into the earth to release oil and natural gas. Fracking for natural gas is becoming increasingly common throughout the U.S. Much of the gas is then shipped to the Gulf of Mexico for export. That means there has to be pipelines to not only transport the gas, but its more toxic and flammable byproducts— propane, butane, and ethane, which is where the Loretto sisters come in. When Catholic sisters began speaking out against the transport of natural gas byproducts through underground pipelines, they generated national attention. 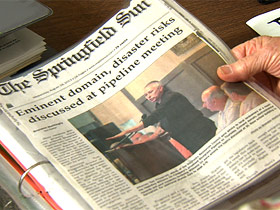 SISTER CECILIANA SKEES: Even in Alaska. For instance, Las Vegas, Louisville several times, Los Angeles, Las Vegas, Austin, Texas, San Francisco, Portland, Oregon, I mean, you name it, there it is. These pipelines could pollute the air, could ruin the water and ruin the land, and you can’t have food if you don’t, if you can’t grow it on the land.

VALENTE: In a classic David-versus-Goliath battle, the Loretto sisters managed to beat back an effort by the Williams Company of Tulsa and their partners to place a pipeline underneath their land. Since then, these 70-plus-year-old sisters have become the unlikely face of opposition to both fracking and to the pipelines that carry their byproducts.

SISTER MARIA: We are hoping to accomplish a process of education that will help people to understand what they’re dealing with. What are we doing to our natural resources? And who owns the natural resources? I mean, that’s the big question behind this, because I feel now that corporations feel that they own the air, own the water, own it enough that they can pay to take a piece of it. 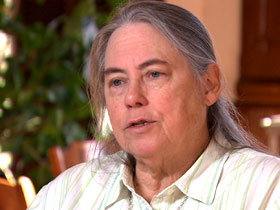 VALENTE: This part of the country is known as the Kentucky “Holy Land.” It got that name because four major religious orders are located here, including the famous Abbey of Gethsemani, America’s oldest monastery, where the monk and spiritual writer Thomas Merton lived. It is also home to the Dominican Sisters of Peace and the Sisters of Charity of Nazareth. All three orders joined the Loretto sisters in opposing the Bluegrass pipeline. The result: the pipeline builders now have to largely skirt the counties where these religious orders are located—this, despite offering payments reportedly as high, in one case, as $350,000 to purchase easements from property owners. The Williams Company declined to comment on camera, but issued this statement: “We are experts at designing, building, and operating pipelines in a safe and reliable manner. Our highest priority is the safety of the public and our employees. We can assure the public that we will meet or exceed all the federal safety requirements.”

SISTER MARIA: I guess my fear is damage to the environment, and damage that is difficult to repair—and maybe even not able to repair—of soil, of water, or air. We were given a place on this planet, these trees, this grass, these animals, ourselves, to be healthy people, to be balanced and healthy, and I see an imbalance in what’s happening both to our resources and to ourselves. 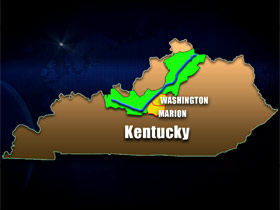 VALENTE: In these parts, it’s not just what grows on top of the land that’s important. It’s also what’s under the land: porous limestone known as carst, and water which are integral for distilling bourbon. This is also the bourbon capital of America. The Makers Mark distillery is just down the road from the Loretto sisters. Jim Beam and Four Roses distilleries aren’t far away. Those companies, so far, are remaining out of the fray about the pipeline. Dominican Sister of Peace Clare McGowan is a local environmental activist:

SISTER CLAIRE MCGOWAN: The pipe is three-sixteenths of an inch. That’s not a very thick pipe. They only require three feet of soil on top of that pipe. On farmland, where somebody’s out plowing, somebody’s out disking, somebody’s out with a combine, it seems to be pretty easy that accidentally that pipe could be ruptured.

VALENTE: There have been several pipeline explosions in recent years, including one in eastern Kentucky in 2004, that destroyed five homes and injured 12 people. That pipeline wasn’t operated by Williams Company, but by one of its competitors. For its part, Williams Company has paid more than $300 million in fines since 2003 for violations ranging from failure to report financial information to improper maintenance of its pipelines. In its statement the company said, “While our goal is zero leaks, our leak record during the past decade is much lower than the industry average.” Williams said that despite the sisters' opposition, it has purchased easements for 50 percent of the route and plans to complete construction of the pipeline through Kentucky by the end of 2015. Like the teachers they have long been, the sisters are transforming the conflict over the pipeline into a learning experience. 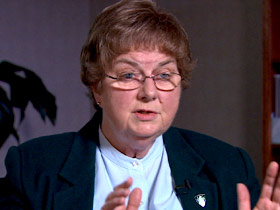 SISTER CLAIRE: What we’re hoping for is an immediate awareness that we have to start the transition to renewable energy sources.

SISTER CLAIRE: Meaning solar, wind, water power—the ways of producing energy that do not require the use of fossil fuels.

SISTER SUSAN CLASSEN: So we have a lot of dead cedar trees in the woods, and so we went out and hauled in some of those cedar logs.

VALENTE: So this cabin is a marvel of recycling and reuse?

VALENTE: The Loretto sisters welcome hundreds of guests to their property each year. They talk about sustainable farming and recycling to preserve resources. They built a series of cabins made of wood and recycled materials for guests to use on spiritual retreats. Susan Classen is director of the sisters’ Cedars of Peace retreat program.

SISTER SUSAN: The recognition that we humans need nature, that the spirit of God in nature settles our spirit, it brings us back to a grounding place, so that our action in the world can really come from a place that’s been energized by God.

SISTER MARIA: People that come for retreat, they say, “I come to the bottom of the hill, and already I can feel there’s a peacefulness that’s here with me.” Over the years, think of it, from 1824, how many people have come here to find something that’s outside of me but that makes me more me, that makes me more whole. I’m going to come, I’m going to look at the trees, I’m going to quiet my mind, and I’m going to be at peace for a while.” That pipeline goes in, you would destroy that tranquility that I feel is needed.

VALENTE: The sisters say they aren’t surprised by the attention their protest has generated. Nor should people be surprised at their willingness to speak out. They say it’s just what Catholic sisters do.

A 200-year-old order of Catholic nuns, the Sisters of Loretto, battle the construction of a pipeline that would transport toxic gases through their Kentucky homeland.