BOB ABERNETHY, anchor: The Vatican reported this week that the number of Catholics in religious orders around the world continued to decline. In the latest figures for 2006, there were just over 945,000 monks and nuns, down about 7,000 from the year before. The overwhelming majority, 753,000, about 80 percent, were women. Around the U.S. the number of nuns has also been going down, and their average age rising. But there are a few places where the reverse is true. Betty Rollin found a Dominican teaching order in Nashville fairly bursting with dedicated young nuns. 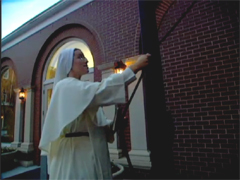 BETTY ROLLIN: They are the Dominican Sisters of Saint Cecilia in Nashville, Tennessee, a traditional order that began in 1860. Their day begins at 5 a.m. with meditation followed by a Mass. Meals are held in silence. Their vocation is to teach. The sisters here have come from different states and different backgrounds, most of them raised Catholic, some not. In 1965, there were about 180,000 nuns in America. By 2007, that number dropped to 63,000 with an average age of 70. The average age of the Dominican sisters is 36. Their numbers have increased so steadily in the past 15 years that they have had to build a 100,000 square-foot addition to the property. The sisters here — the first year postulants, the second year novices, and those who, after seven years, have taken their final vows all say they have been called by God and that they are in love.

Sister KATHERINE WILEY: When you’re a little girl, you’re planning your wedding, you’re playing bride. But just to allow the Lord to transform my heart to see that I would still be a bride, but I would be his bride.

Sister AMELIA HUELLER: A woman wants to give herself so totally to one man, to hold nothing back, to be so intimate with him and to bring forth life with him. It took me awhile to understand — well, “understand” is the wrong word — but to see that God will fulfill all of that, that he was asking me in a total way to give myself totally to him.

ROLLIN (to Sr. Hueller): How do you know that this God that you’ve given everything to is really there? 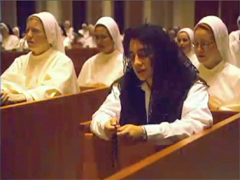 ROLLIN: Sister Amelia Hueller was brought up in a non-religious home and converted to Catholicism.

Sr. HUELLER: I finished high school, I went to college in Washington, DC for four years, and I came up against relativism: the idea that we can’t — people said that we couldn’t know what was good, what was bad, what was true. So I really began questioning where truth comes from. Where does goodness come from? I know I have values. Who gives them to me? And so between that moment and here, it was a process of, “This is scary, I don’t understand this. I don’t see why I would be called. How can I be called? I am so normal.”

Sr. MICKWEE: For me, it wasn’t so much a voice per se but through prayer — just in the silence, just letting him be there and finding out, really asking him, “What do you want from me, God?” I mean, I really had everything I could have wanted in the world, and there wasn’t anything that I was trying to get away from.

ROLLIN: Sister Catherine Marie Hopkins, who has been a Dominican nun for 23 years, helps direct the order’s educational program.

Sister CATHERINE MARIE HOPKINS, O.P.: Very rarely do people come and say, “I’ve always wanted to be a sister.” You know, I always found that very suspect. You know, usually it was, “I was going through life very happily and suddenly this strange idea came and I tried really hard to eliminate it.” In my own life, that was the case.

ROLLIN: This life is not for everyone who comes here. Who is most likely to remain? 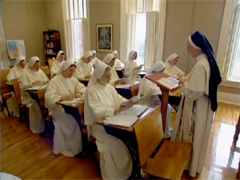 ROLLIN: Colleen Carroll Campbell, who is a fellow at the Ethics and Public Policy Center, wrote THE NEW FAITHFUL: WHY YOUNG ADULTS ARE EMBRACING CHRISTIAN ORTHODOXY. Ms. Campbell found that the conservative orders, like the Nashville Dominicans, are the ones that are attracting young people.

COLLEEN CARROLL CAMPBELL (Author, THE NEW FAITHFUL): These are orders where the sisters still wear their full-length habits, where they still gather to pray seven times a day, where they still live what is really a very traditional religious life.

ROLLIN: The new nuns say they were hugely affected by Pope John Paul II, who reached out to young people in his World Youth Days and rallies, entreating them to remain faithful to the traditional teachings of the church.

Ms. CAMPBELL: Young adults really saw in Pope John Paul II someone who was calling them to something the world never dared called them to, and that is sacrifice, self-denial, laying down their lives at the feet of Christ and asking him, “What do you want me to do with my life?” And for a lot of these young women when they ask that question, following John Paul’s example, what they heard is that I want you to give up everything and follow me as a consecrated woman.

The younger sisters we’re seeing tend to be very firmly in support of the pope in terms of Catholic teaching, including on the non-ordination of women. So this is kind of an interesting reversal here, and often it is referred to by some of the older Catholics as, you know, the “young fogies” because they’re in many ways more traditional than their elders. There’s an element of reaction there. After Vatican II, there were many good changes. There were a lot of things that got tossed out prematurely: the devotional life — almost completely obliterated; liturgical music and the liturgy itself just became very entertainment-oriented.

ROLLIN: Regimentation, rules, sacrifice — all part of convent life. But those who are here speak mainly of their joy.

Sister HUELLER: With sacrifice can come great joy. We know that sacrificing is not opposed to being happy. In fact, it can be our path to happiness. So sadness, no; sacrifice, yes.

ROLLIN: Colleen Carroll Campbell thinks that their initial passion may fade, but that the joy these young women feel will sustain them and encourage others to a more religious life.

THE NEW FAITHFUL: WHY YOUNG ADULTS ARE EMBRACING CHRISTIAN ORTHODOXY by Colleen Carroll Campbell SISTERS IN ARMS: CATHOLIC NUNS THROUGH TWO MILLENNIA by Jo Ann Kay McNamara THE HABIT: A HISTORY OF THE CLOTHING OF CATHOLIC NUNS by Elizabeth Kuhns SISTERS: CATHOLIC NUNS AND THE MAKING OF AMERICA by John Fialka