KIM LAWTON (correspondent): The movie starring Judi Dench as the title character has fictionalized some details, but Philomena Lee says it tells her story. Now 80, she believes the film puts a spotlight on the realities for thousands of Catholic unwed mothers in Ireland who still carry guilt and shame half a century later.

PHILOMENA LEE: You’ve got to remember it was 1952, very early 50s. Life was completely different then, you know, complete to now, nowadays. I ended up becoming pregnant and, as I say, in those days it was just the most awful thing to become pregnant out of wedlock.

LAWTON: Lee was educated by nuns and says she was ignorant about the facts of life when she got pregnant at 18, the first time she had sex. Her family disowned her, and she was sent to a convent-run home for mothers and babies. 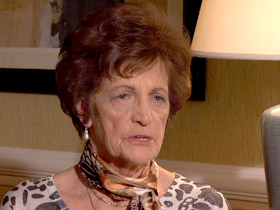 LEE: We were completely ostracized. But of course in my religion then it was classed as a very serious mortal sin to have a baby out of wedlock. So, and of course families were shamed as well.

LAWTON: Lee stayed at the abbey for the next three-and-a-half years raising her son Anthony, working in the laundry there, and being made to do penance for her sin. She says some of the nuns were harsh, but others were kind, including the one who alerted her just before Christmas that Anthony was being taken away.

LEE: I ran up the stairs with her and looked out the window, and there he is going off with in the car. And all I could see was in the back of the window was his face. And that’s my main memory, my one memory that I’ve never ever, I never will forget.

LAWTON: They told her he was going to a good Catholic home in America, but she was devastated.

LEE: My lovely little boy was gone. I was so upset, angry, crying all over Christmas. I couldn't stop, I couldn't eat. The nuns got a little fed up with me, I think, saying I should be grateful he went to good home.

LAWTON: After she left the abbey, Lee went on to become a psychiatric nurse. She got married, had a daughter, Jane, and another son. About ten years ago, she finally told Jane about Anthony. 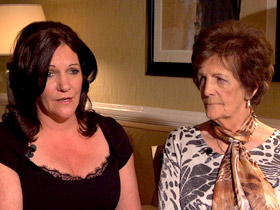 JANE LIBBERTON (to Lee): I said, do you want me to try and find him? I think first of all you kind of went, ‘No.’ Because again the shame you know…

LIBBERTON: …because it’d been such a secret. But immediately you said, ‘Do you think you can?’

LAWTON: Libberton uncovered some details, but says they were stonewalled by nuns at the abbey, who refused to give out information. Eventually, they connected with a journalist, Martin Sixsmith, who helped find more answers.

MOVIE CLIP: Now we’re getting closer, all these years wondering whether Anthony was in trouble or in prison or goodness knows where. As long as I didn’t know, I could always tell myself he was happy somewhere and that he was doing all right.

LAWTON: They learned that Anthony, whose adopted name was Michael Hess, had become a high-powered lawyer in Washington, DC. And sadly, they discovered that he had died of AIDS in 1995, and that he had been trying to find Philomena as well.

LEE: And I thought, oh, I'm losing him for a second time again. That was the second time I had lost him, really.

LIBBERTON: That was a pretty terrible evening, wasn't it? 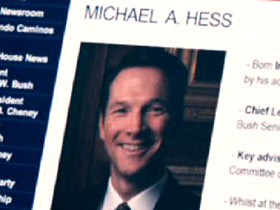 LEE: It was an awful evening, I'll tell you.

LAWTON: Lee says in the years after Anthony was taken, she did harbor some anger and bitterness which challenged her religious beliefs. But she says, she ultimately hung on to her faith.

LEE: I was brought up with Nuns all my life so I believed everything we were told. That was it. But I did lose a little bit after I left, when I lost Anthony. I thought, how could they do this to me? But I mean, they were doing what they thought was right.

LIBBERTON: You have retained your faith, though.

LEE: Oh, and I have very much so. I still believe, and I still retain a lot of my faith.

LAWTON: She says her work at the psychiatric hospital also helped her overcome her bitterness.

LEE: I saw so much hurt and so much pain caused through anger in the psychiatric hospital in those days. It was, some of them were so tragic and so sad that I gradually put my own anger behind me and gradually thought, ‘Well it is no good keeping up like this.’ And it all happened 60-70 years ago, you know. So, you can’t, I couldn't go through life being angry.

LAWTON: But lingering shame has been more difficult to let go. 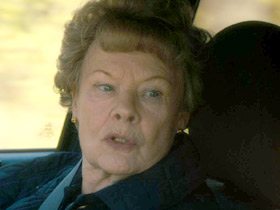 MOVIE CLIP: I was going to ask you, Martin, if it’d be possible not to use my real name when you write the story? Perhaps you could call me Nancy. I’ve always loved that name, Nancy. I have a niece called Nancy—oh no, maybe they’d think it’s her…”

LAWTON: Lee says she was initially reluctant to go public with her story.

LEE: It’s the shame of it all. It was terrible then, you have no idea what it was like in those days. Anyway, I said, no, perhaps maybe if I come out with my story maybe it will help other women that were like me, you know. That maybe get the courage to come out and try and find their children as well.

LAWTON: Some critics have objected to the way nuns in the film were portrayed, especially in how they refused to release information to either Philomena or Anthony. But Lee and Libberton say the story is not meant to be an attack on the Catholic Church.

LIBBERTON (to Lee): Although the nuns took you in and took care of you, they were, they may have been the solution at that time, but the church itself was also part of the problem. But it was never intended to be an anti-Catholic film at all.

LIBBERTON: And I don't think it is. I mean, the way Judi plays you in your character throughout the film, it does show that you have retained your faith.

LIBBERTON: All the way through it. 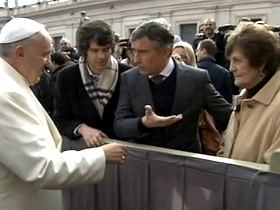 LAWTON: On February 5, Lee and Libberton brought their real-life story to the Vatican, where they had a chance to meet Pope Francis.

LEE: I felt so forgiven as it, all them years ago, I mean, it was such an awful sin to have a baby out of wedlock. It made me feel so good inside because I carried the guilt for 50 years.

LAWTON: Lee and Libberton have now teamed up with the Adoption Rights Alliance to launch the Philomena Project, which urges churches and the Irish government to open up adoption records, which are still, by law, closed.

LIBBERTON: Ultimately we hope that it might help change the legislation in Ireland, because it is very difficult to get any information. You don’t have an automatic right to find out who you were if you were adopted.

LAWTON: Although her own story didn’t have the happy ending she hoped for, Lee says she takes comfort in knowing Anthony asked to be buried by the abbey where he was born, in hopes that one day, his mother would find him.

LEE: I know it was a sad way to find him. He died, but knowing that he did so desperately try to find me. And so I put some closure and I feel so within my heart, so at peace because I know up there he is watching over me.

The movie “Philomena” is up for four Oscars, including Best Picture, at the Academy Awards on Sunday, March 2. It tells the true story of an Irish Catholic girl forced by nuns to give up her son for adoption and her search for him decades later. “If I come out with my story, maybe it will help other women that were like me…maybe they’ll get the courage to try and find their children as well,” says Philomena Lee, the real Philomena. She has launched the Philomena Project to raise awareness and encourage the Irish government and Catholic Church to make adoption records public.