Read an excerpt from Jesus: A Pilgrimage by James Martin, SJ

KIM LAWTON, correspondent: For Christians, this is the most sacred time of the year, a time when they reflect on some of the key events of Jesus’s life… events that shape their core beliefs.

REV. JAMES MARTIN, S.J. (Author, Jesus: A Pilgrimage): The story of the passion, death and resurrection, especially the resurrection, which we commemorate during Holy Week, is at the center of a Christian’s faith. Really it’s the resurrection that changes everything. 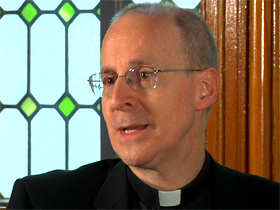 LAWTON: Roman Catholic priest and best-selling author James Martin believes the Easter season provides Christians with fresh opportunities to explore what he calls one of the great mysteries of the Christian faith…the teaching that Jesus was fully human and at the same time, fully divine. Some scholars and authors focus exclusively on the historical Jesus of Nazareth, and others on the Christ of faith. Martin’s new book, Jesus: A Pilgrimage, tries to bring the two together.

LAWTON: And Martin argues that in order to fully understand Easter, Christians need to consider both perspectives. 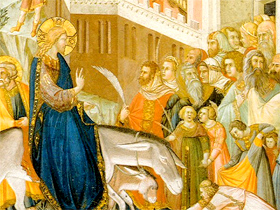 LAWTON: Martin’s book draws in part on insights from a recent pilgrimage to the Holy Land. He says he could vividly imagine Jesus as a real person, in real places, such as on Palm Sunday, when Jesus entered the gates of Jerusalem to the cheers of crowds who were waving palm branches.

MARTIN: Palm Sunday is very bittersweet because when Jesus and the disciples enter Jerusalem, it’s to these great crowds who are rejoicing and welcoming him as Messiah. And so in a sense it’s kind of his triumph. But the Christian knows that in another week, he’ll be crucified. So he goes from kind of the top of the world to really just being rejected.

LAWTON: On Holy or Maundy Thursday, Jesus instituted the practice of communion, the Eucharist, which Christians regularly reenact in worship services. But at the same meal, Jesus also washed the feet of his disciples, something many Christians commemorate only once a year.

MARTIN: And it helps us move into the other events of Holy Week, particularly the crucifixion, by reminding us what Jesus is doing. Everything he’s doing is out of a sense of service and humility and so in a sense that prepares us for what is about to come.

LAWTON: After the supper, according to the Bible, Jesus and his disciples went to pray in a garden called Gethsemane, on the Mount of Olives. Scholars believe the general location is the same as it was 2,000 years ago. Martin says the story shows Jesus at his most human. 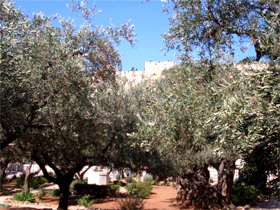 MARTIN: One Gospel translation says that he collapsed on the ground in prayer – not that he kneels on the ground but he collapses on the ground. And he prays, he says remove this cup, meaning I don’t want to die. I don’t know if I can deal with this. But he has to pray three times before he comes to understand that this seems to be what the Father is asking of him. And interesting, when I was in the Holy Land, I realized that the Judean wilderness is just a few hundred yards away. He could have easily escaped but somehow he decides and believes that this is what the Father is asking of him and he says yes.

LAWTON: Martin says rituals of Holy Week help connect Christians more fully with Jesus. Throughout the season, and especially, on Good Friday, many pray at Stations of the Cross, which remind them of the path Jesus took to the crucifixion.

MARTIN (to LAWTON): So this station is Jesus being nailed to the cross. And while a lot of Christians focus on the physical sufferings of Jesus, which were intense – I mean crucifixion was probably the worst way to die – there are other ways that Jesus suffered that I think Christians can connect to. So, the feeling of abandonment. Jesus is not only abandoned by his disciples but he feels at one point, abandoned even by God the Father. Betrayal – one of his closest friends betrays him. And loneliness – simple loneliness. So a lot of the emotional sufferings that Jesus went through are also ways that Christians can enter into Jesus’ life. 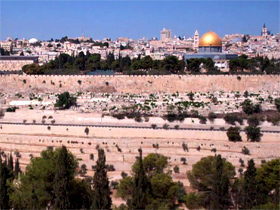 LAWTON: In Jerusalem, Christians reenact the path to the crucifixion along the Via Dolorosa in the Old City. Historians may question the authenticity of some of the locations, but Martin says for many, it’s a profound spiritual experience.

LAWTON: Martin says for him, the most meaningful stop was the Church of the Holy Sepulchre, the ancient church built over the site where tradition says Jesus was crucified.

MARTIN: One of the most powerful experiences I had in the Church of the Holy Sepulchre was walking a staircase to go up to the hill of Golgotha. And when I was walking up, I thought this is the same incline, this is the same rise that Jesus walked up and I felt myself to be very unworthy to even climb those stairs.

LAWTON: Also inside is the spot where many Christians believe Jesus was buried. 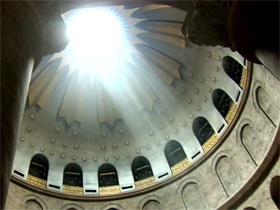 LAWTON: Martin calls the resurrection a message of “unparalleled hope and unparalleled joy.”

MARTIN: Beyond just the simple fact, and it’s an amazing fact, that Christ is risen, it means that God can do anything. That life is stronger than death. That love is stronger than hatred. That hope is stronger than despair. But most importantly nothing is impossible with God. And I think that’s what Jesus proclaims as he comes forth from the tomb.

LAWTON: He acknowledges that for many people, the concept of the resurrection can be difficult to accept.

MARTIN: I always remind people that there are certain, what you might call proofs of the resurrection. The disciples moved from being terrified to being ready to spread the Gospel at the risk of their lives. And frankly only something as vivid, as dramatic, as real as the resurrection could effect that change.

LAWTON: He also notes that the Gospels say the risen Jesus first appeared to a woman, Mary Magdalene.

MARTIN: New Testament scholars say that if the Gospel writers wanted to kind of make this up – if they were making it up – they would have never have picked a woman because at the time women were seen in that culture as not particularly reliable witnesses. And so, in a sense, it’s a kind of proof, if you will, of the Gospel’s authenticity.

LAWTON: Ultimately, Martin says, it is a matter of faith, one central to Christianity.

MARTIN: You know a lot of people like to think of Jesus as just a compassionate prophet or a wise teacher or even a healer but they stop short when it comes to Easter Sunday. But you must accept Easter Sunday, if you’re going to be a Christian. It’s the whole point of the story. The fact that he died, even in a noble way really doesn’t tell the whole story. And without the resurrection, the Gospels just fall apart.

LAWTON: And he says that’s why billions of Christians around the world celebrate Easter Sunday. I’m Kim Lawton in New York.

Read an excerpt from “Jesus: A Pilgrimage” by James Martin, SJ (HarperOne, 2014): 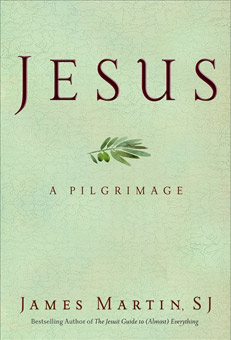 Today the Church of the Holy Sepulchre is a place of occasional infighting among the groups managing the site. It was disheartening to learn that the six groups—Roman Catholics, Greek Orthodox, Armenians, Syrians, Copts, and Ethiopians—each with its own particular territories within the church, eye each other for any encroachment on their space or infringement of what they consider their rights. In general relations are friendly. But Jesus’s desire expressed at the Last Supper that “they may all be one” sometimes seems frustratingly elusive here. During one visit to the church I told a friendly Franciscan friar that I’d heard that recently there had been a fistfight. “On, no,” he said,” just some shoving, that’s all.” …

I stood outside and looked at the great door, which itself is an emblem of the contentiousness within the church. Every night at eight o’clock the door is locked by a Muslim guardian (apparently to prevent any of the Christian groups from squabbling) whose family has been entrusted with this job for thirteen hundred years. The door is opened every morning at four in an elaborate ritual in which religious representatives hands the guardian, who stands outside, a ladder through a small square opening in the massive wooden door. The door is unlocked with a foot-long iron key and great fanfare.

When I walked in, I heard singing. From somewhere before me came the unmistakable harmonies of chanting. To the side, in a small Catholic chapel a group Franciscan monks said their morning prayers. Immediately in front of me was a long marble slab that a man knelt to kiss. This was the Anointing Stone, on which Jesus is supposed to have been anointed before his burial. The New Testament scholar Jerome Murphy-O’Connor dates it to the twelfth century. I kissed it anyway.

From Jesus: A Pilgrimage by James Martin, SJ (HarperOne, 2014)

More than two billion Christians around the world are reflecting on the life, death, and resurrection of Jesus this Easter weekend. Prominent Roman Catholic priest Rev. James Martin SJ, the author most recently of the New York Times bestseller Jesus: A Pilgrimage, shares with R&E why he believes the resurrection is so central to their faith: “You must accept Easter Sunday if you’re going to be a Christian. The fact that Jesus died, even in a noble way, really doesn’t tell the whole story. Without the resurrection, the Gospels just fall apart.”