KIM LAWTON, correspondent: In a trip dominated by themes of peace and reconciliation, Pope Francis made numerous symbolic stops. But there were also spontaneous moments, and those gestures, Francis said, he considers the most authentic.

The visit began in Jordan, where Francis stressed the importance of religious coexistence. His presence encouraged the country’s minority Christian population, whose percentage has dramatically diminished in recent years. At a stadium mass in Amman, Francis renewed calls for peace in Syria, and he praised Jordan for welcoming more than a million refugees.

Later that day, the pope prayed at the Jordan River Baptism site, where many believe Jesus was baptized. Then Francis met with Christian and Muslim refugees who told him their stories of hardship. 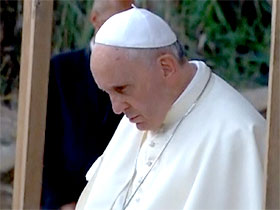 He urged them not to give up hope.

From there, Francis flew directly to the West Bank, a move which angered some Israelis who thought he should have gone by way of Israel. The Vatican attempted to counter the criticism by saying Francis did not want to arrive in Israel on the Sabbath, the Jewish day of rest. Palestinians were gratified that Francis referred to the “state of Palestine,” something many in the international community, including the US, don’t recognize.

Francis held a mass in Bethlehem’s Manger Square, near the Church of the Nativity which marks the traditional birthplace of Jesus. Once again, he tried to bolster local Christians. But politics were hard to avoid. Mass was celebrated in front of a giant mural with the baby Jesus wrapped in the traditional black and white Palestinian head covering. The pope made a strong appeal for peace between Israelis and Palestinians, saying both sides had to make sacrifices to end the conflict. He issued a surprise invitation for Israeli President Shimon Peres and Palestinian President Mahmoud Abbas to join him at the Vatican to pray for peace. Both accepted within hours.

The realities of the conflict were front and center as Francis met children from Palestinian refugee camps who described their lives under Israeli occupation. He told them to remember that “violence begets violence.” One of the most dramatic images of the trip came when Francis made an unplanned stop at the massive separation barrier constructed by Israel as a security measure. Francis stood in front of the wall for several moments and bowed his head in prayer. 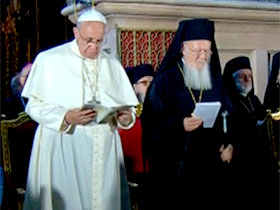 The final leg of the trip was Israel. Francis said his main purpose was to meet with Ecumenical Patriarch Bartholomew, spiritual leader of the world’s Eastern Orthodox Christians. The two commemorated the 50th anniversary of a meeting between Pope Paul VI and Patriarch Athenagoras which ended nearly a millennium of estrangement. At an emotional prayer service at the Church of the Holy Sepulchre, the two leaders recited the Lord’s Prayer together and pledged to work for a time when full communion is restored.

Francis also met with Israel’s chief Rabbis. And he visited the Dome of the Rock, one of the most sacred places in Islam, where he met with the Grand Mufti of Jerusalem. There, he urged that no one abuse the name of God through violence.

Another emotional moment took place at the nearby Western Wall, the holiest site for Jews. After praying in front of the wall and leaving a note, Francis embraced his traveling companions, a rabbi and a Muslim leader, his friends from Argentina. Francis also went to Yad Vashem, the Holocaust Memorial, where he decried the evil of the Holocaust and vowed, “never again.”

Here too, political sensitivities abounded. Francis became the first pope to lay a wreath at the grave of Theodor Herzl, considered the father of modern Zionism. And Prime Minister Benjamin Netanyahu asked Francis to make another unplanned stop at the Memorial to Victims of Terror, which honors Israelis killed by Palestinian militants. In response, the pope offered more prayers for an end to terrorism and violence.

Observers say the pope’s message of peace and reconciliation made an impact on many fronts. Attention is now shifting to the upcoming prayer meeting at the Vatican. Some have dismissed it as a mere symbolic gesture. But Francis insisted that prayer is key to any breakthrough. And for Catholics, and many others, symbols can take on the utmost importance. I’m Kim Lawton reporting.

Pope Francis made a brief yet momentous visit to the Middle East May 24-26. The primary purpose of the trip was to meet with Ecumenical Patriarch Bartholomew, as well as a range of other religious leaders, and to support the dwindling Christian population in the region. But along the way he also visited Yad Vashem, the Western Wall, the Jordan River, and the Dome of the Rock, and he made an unplanned stop at the security wall that surrounds the West Bank city of Bethlehem. Perhaps the pope’s most dramatic call for peace was his unexpected invitation to Israeli President Shimon Peres and Palestinian President Mahmoud Abbas to pray with him at the Vatican.