SAUL GONZALEZ, correspondent: It's a scene that captured the attention of the country and world: anti-immigrant protestors blocking buses filled with undocumented Central American migrant children, some adults, from reaching a border patrol station in the southern California community of Murrieta.

The children aboard the buses were just some of the more than 52,000 minors, many of them unaccompanied by adults, who have been detained by immigration authorities since October. It's the largest influx of asylum seekers into the U.S. since 1980.

There are so many migrant children arriving, temporary immigration holding facilities along the border have been filled to capacity, and the children have been flown to other parts of the country for shelter and care at military bases and other facilities. Overwhelmed by the sheer number of migrants, the government has turned to faith communities for help. 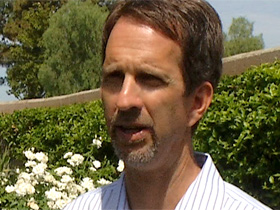 JOHN ANDREWS (to GONZALEZ): We are in the former convent at St. Joseph Catholic Church in Fontana. And this is a place where two days ago we welcomed forty-six migrant women and children here to provide kind of a temporary place for them to rest and receive basic services.

GONZALEZ: John Andrews is a spokesperson for the Catholic Diocese of San Bernardino County east of Los Angeles. The diocese is using available buildings on church grounds to provide temporary shelter and aid to the migrants before they are united with family members in this country, or sent back to their own countries.

Here they can sleep on air mattresses in spartan but clean rooms, get access to toiletries and diapers, and replace worn out shoes and clothes with slightly used replacements. The kitchen is also filled with donated food that hungry kids might like. Andrews says the diocese has no choice but to help the migrant children and their families.

ANDREWS: This is what our Catholic faith calls us to do, to come to the aid of those who are desperately in need of our help. It’s written all over the Scriptures. The Church has a well documented history of social service outreach, and supporting migrants, supporting anyone who is in need. And this just presented itself to us as an obvious no-brainer, that we needed to help here.

GONZALEZ: To protect the children and families they’re helping, the diocese isn’t allowing journalists to photograph or interview them, but Andrews did show us some video he took on his smartphone. Here a nun plays with one of the migrant children. 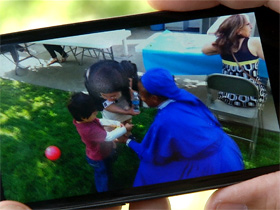 GONZALEZ (to ANDREWS): And they just look, obviously, just like kids?

ANDREWS: That's what I am saying. Kids are kids. And that's what we wish more people would understand and see these people for their humanity and see that they are kids just like your kids.

ANGÉLICA SALAS: Well, we've known there has been an increase in the number of children who have been migrating by themselves coming to the United States, so this was not news to us.

GONZALEZ: Angélica Salas is the director of the Coalition for Humane Immigrant Rights of Los Angeles, or CHIRLA. She says the children fleeing countries like Guatemala, Honduras and El Salvador are trying to escape growing levels of criminal violence and poverty in their own countries, with many risking a dangerous trip across Mexico to get to the US-Mexico border.

GONZALEZ: But many Americans don't think they should. Back in Murrieta, California, protestors have set up a semi-permanent encampment across the street from the border patrol station. The demonstrators are vowing to stop immigrant children from arriving. They're also pushing for much tougher immigration laws. 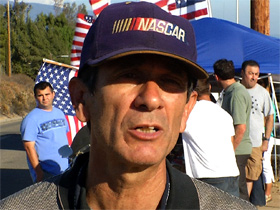 RICHARD PAEZ: Our immigration laws are the worst in the world.

GONZALEZ: The worst in the world?

PAEZ: We just don't have any immigration laws.

GONZALEZ: Many of the protestors here say they don't want to appear hard-hearted, especially when it comes to the plight of migrant children. They'll tell you they just want America to look after its own citizens before helping others. Andrea Rockwood shares that sentiment.

ANDREA ROCKWOOD: Our system is completely broken, and we need to fix our system before we can even help anybody. We can't even help our own. Our veterans are on the streets. We have so many homeless people here now.

GONZALEZ: So your argument is we have plenty of problems in this country to look after?

ROCKWOOD: We have plenty of problems. Correct. And it has nothing to do with race or children. It's the system that's wrong. It's not them.

GONZALEZ: Two miles away at a gathering on the lawn of Murrieta's civic center, feelings were very different. Here people who believe that migrant children from Central America should be welcomed gathered for their own rally. Local religious leaders from many denominations were also here to show their support for helping the migrant children. 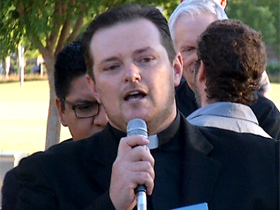 FOSSA (at podium addressing audience): God wants us to do it. There's a phrase we use. Si dios es tu padre, el immigrante es tu hermano, tu hermana. If God is your father, the migrant is your brother and sister.

GONZALEZ: But when a small group of counter-protestors arrived, words got heated and personal.

COUNTER-PROTESTOR: I’m not a racist.

MAN: You're not a racist?

GONZALEZ: These men argued like this for about an hour, with neither changing the mind of the other. And long term, what’s ahead for these thousands of undocumented children and they’re families now that they’re in the United States? Well, eventually they’re supposed to appear in federal immigration court, where their appeals to stay in the United States will be heard. But critics question just how much justice they’ll receive in the courtroom.

JUDY LONDON: We see due process violated, day in and day out. There are so many immigrants in these courtrooms that never have the ability to have representation or even consult with a lawyer.

GONZALEZ: Judy London is an attorney with Public Counsel, a public interest law firm that provides legal assistance to undocumented immigrants. She says when the migrant children finally appear in federal immigration court, like the one inside this downtown Los Angeles office tower, many will apply for asylum because of violence in their native countries. But unless they or their families can pay for it, they won’t be provided an attorney.

LONDON: So under our current immigration court system, the government pays for a judge, pays for an immigration prosecutor who’s goal is to deport the child, but there is no counsel for the child. This is a long-standing problem, where those of us who work in immigration law for years have had to sit in court and watch children, sometimes toddlers, be held up before a judge with no one to speak for them.

GONZALEZ: In response, London’s group has filed a class action lawsuit on behalf of the thousands of undocumented Central American youth who have recently arrived in the U.S. It demands that the government provide legal representation for the children.

LONDON: When you deprive a portion of the population to accessing counsel you create a system that is just fundamentally unfair for those who are swept through it.

GONZALEZ: And as America struggles with how best to deal with the young migrants who are already here, more are making the long and dangerous journey north, to try to get into this country.

The surge of Central American immigrants crossing the US-Mexico border, thousands of which are unaccompanied minors, is being met with both disdain and compassion. While the government attempts to respond according to the law, Americans are expressing their own reactions.