BETTY ROLLIN, correspondent: Jamie and Jason Fowler and their two children, Juliet and Jack, recently moved to Mundelein, Illinois where Jack can get treatment for his life-threatening disease. It’s called Hunter Syndrome. He lacks an enzyme needed to break down sugar molecules and, as a result, suffers damage throughout his body.

JAMIE FOWLER: He has hydrocephalus in the brain, so he has large ventricles with a shunt. He has joint contractures, he has stenosis in the spine, carpel tunnel syndrome in his hands. He’s had surgeries done. He has heart stuff going on, liver and spleen enlargement.

ROLLIN: Is he in pain?

JAMIE FOWLER: I think his tolerance for pain is high, but I think that there’s definitely pain involvement. 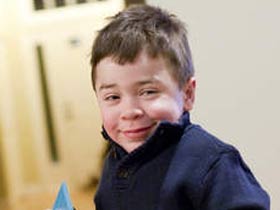 ROLLIN: Jack is on an enzyme replacement drug called Elaprase, which gave him some relief initially, but no longer. There is a Phase II/III clinical trial going on now that the Fowlers tried unsuccessfully to get Jack enrolled in.

JASON FOWLER: So the trial that’s going on right now is a reformulation of that Elaprase, and it’s injected directly into the spine, and the fluid in the spine takes that drug to the brain and then it helps the brain, and so it treats that tissue that normally isn’t treated. And so we’ve been denied access to that because of Jack’s Hydrocephalus and the shunt that he has in his—on his head.

ROLLIN: For patients who are ineligible to be part of a clinical trial, another option exists. The Fowlers tried to get access to the treatment they wanted through the program called expanded access or compassionate use. But in order for Jack to get the treatment, the drug company, Shire Pharmaceuticals, would have to comply. But they did not. Drug companies want to get their drug to the market as quickly as possible, and a clinical trial is the only way to do that. Often drug companies say they must reject applicants for compassionate use because of their concern that their clinical trial process would be compromised. Dr. Russell Medford is a cardiologist and drug developer who chairs the bioethics committee for the biotechnology industry.

DR. RUSSELL MEDFORD (Chair, Bioethics Committee for BIO): How do we balance the rapid and accelerated approval of drugs that we can establish, definitively establish, are safe and effective versus the needs and immediate needs of individual patients who cannot wait for us to come to those final determinations? Something that people probably don’t quite understand is we only make as much as we need for the clinical trials. And certainly one or two patients that we agree to do expanded access on is 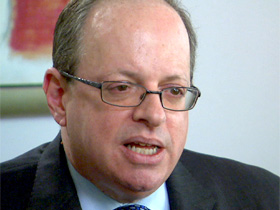 probably going to be fine. It’ll probably be acceptable. But if it’s hundreds, and we’re only studying hundreds of patients, where’s the drug to come from? It’s not something that’s sitting on our shelves.

ROLLIN: The goal of clinical trials is to establish whether drugs are both safe and effective. It’s usually a lengthy process. But desperate patients are not concerned about safety.

DR. MEDFORD: In the 1990s, a new form of therapy, based on early and preliminary results, was called high-dose chemotherapy for breast cancer. It involved using toxic levels of a drug and replacing the bone marrow. It was the belief then of physicians and patients that this was better, even though the data was not definitive. Many patients demanded it, and ultimately insurance companies began to pay for this therapy, which was unproven based on clinical trials. It delayed the conclusion of the definitive clinical trials by years. And when those final trials were, results were reported out this very toxic therapy was no better than standard chemotherapy, and in fact it did harm.

ROLLIN: Richard Klein directs the FDA’s patient liaison program. His office fields more and more calls from patients who, having received permission from the drug company, now need the FDA to grant their request for these unapproved drugs. Most of the time the request is granted, but he often feels that their hopes are misguided.

RICHARD KLEIN (Federal Drug Administration Patient Liaison Program): People have too much confidence that because it’s new, because it’s in development it’s going to be effective, it’s going to be a cure. People always say, “Well, if a person is in a deadly situation and they’re going to die anyway,” as people often say, “what could possibly be worse?” And it could be that people would be hurried to a death. You can die 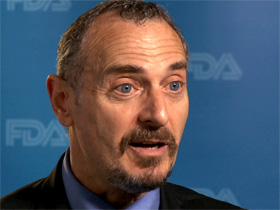 much sooner taking certain chemicals. Or it could prolong life without any benefit in terms of quality of life.

ROLLIN: But that view has not deterred Nancy Goodman, patient advocate, who after her own son, Jacob, died created Kids V Cancer, an organization promoting drug access and development for children.

NANCY GOODMAN (Kids V Cancer): The most serious obstacle, frankly, is the relatively small size of the market for pediatric cancer and other pediatric rare diseases. We have to find ways in our society to either give companies a reason to come in this market or really pour in significant government resources into developing these drugs.

ROLLIN: Nancy Goodman also points out how difficult it can be for families to apply to the drug company for compassionate use.

NANCY GOODMAN: Companies don’t have on their websites a little button, you know, click here to apply for the compassionate use program. They don’t have a stated policy as to what their timeline will be for turnaround.

ROLLIN: In desperation, some parents turn to social media. The idea is to get people, anyone they can, to support their efforts in getting the drug that they want from the drug company. And there is now some legislative action supporting this cause. 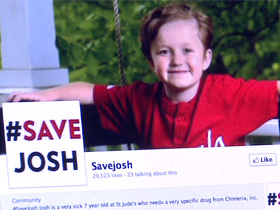 Colorado recently passed what is known as a Right to Try law which allows patients to receive experimental drugs without going through the FDA. Similar bills have passed in Missouri and Louisiana, and in Arizona Right to Try will be on the ballot in November. Drug companies in these states, however, are not obliged to make the drugs available, and insurance companies don’t have to pay for the treatments.

Richard Klein has some doubts about the new legislation.

KLEIN: The agency has a pathway. It seems to work quite well, and I’m not sure what the state Right to Try bills would really add to that, and in fact I think might take away some of the safety advantages that people have by going through the FDA process, where you’ve got institutional review board, you’ve got somebody checking the informed consent, make sure that patients are fully aware of what they’re getting into.

ROLLIN: Meanwhile, the Fowlers have taken their son Jack’s treatment into their own hands.

JASON FOWLER: We’re working with some physicians to take Jack’s Elaprase and have it reformulated so that they could administer it the same way that’s done in the trial, just without Shire [Pharmaceutical Company]. We shouldn’t have to. Is there risk involved? There definitely is but, again, we don’t, you know—the other option is watching our son deteriorate and die and we’re not going to stand by and do that.

ROLLIN: Although Richard Klein supports the compassionate use program, he sometimes worries that people’s desperation to get unapproved medication for their loved ones may not be what their loved ones truly want.

KLEIN: I’ve seen it more than once where it’s the family members simply can’t let go or decide we can leave no stone unturned, whether or not it’s what the patient really wants and feels this is the best thing for the patient.

ROLLIN: All the harder to know if the patient is a young child. For Religion & Ethics NewsWeekly, I’m Betty Rollin in Mundelein, Illinois.

Jamie and Jason Fowler are seeking access to experimental drugs that have not yet been approved by the FDA to treat their son Jack’s life-threatening disease. The pharmaceutical company can make the treatment available to the family without FDA approval, but that could further delay the clinical trials required for official release. “How do we balance the rapid and accelerated approval of drugs that we can establish, definitively establish, are safe and effective,” asks Dr. Russell Medford, who chairs the bioethics committee for the Biotechnology Industry Organization, “versus the immediate needs of individual patients who cannot wait for us to come to those final determinations?”