RAIS BHUIYAN: I knew I was dying and I was crying and I remember myself screaming “mom” very, very loudly.

SEVERSON: Rais Bhuiyan, a well educated, upper middle class air force pilot gave up a life of privilege in Bangladesh and moved to America the land of his dreams.

ANAND GIRIDHARADAS: He had this sense that America was the triumph of, of everything that he could hope for.

SEVERSON: Anand Giridharadas, authored a book about Rais entitled The True American. He says when Rais moved to Dallas the deeply devout Muslim started out working twelve-hour days at a gas station and convenience store. 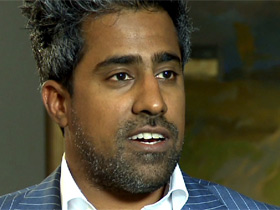 GIRIDHARADAS: One of the images that kept coming to him was, you know, the Prophet Mohammad in his Islamic faith was a shepherd and that day job did not limit his destiny, so why should working in a gas station limit Rais’s destiny.

SEVERSON: Not long after he took the gas station job, Rais Bhuiyan was shot in the head, the victim of a hate crime.

SEVERSON: It was ten days after 9/11, raining cats and dogs, Rais was behind the counter at Buckner foods when Mark Stroman walked in wearing a hat, a bandana, sunglasses and holding a sawed off double barrel shotgun. Rais had been robbed before. He said “please don’t shoot me, you can take the money” and then he heard Stroman say “Where are you from?”

BHUIYAN: And I felt a cold air flow through my spine that time. And I thought he is not here for the money. And I said “excuse me.” Without giving me any answer he shot me from four to five feet away with a double barreled shotgun.

SEVERSON: He had thirty-eight pellets lodged in his face, but he was still alive. 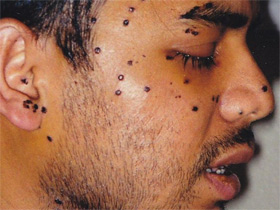 BHUIYAN: And I thought if I don’t pretend I was dying, who knows, he might shoot me one more time.

SEVERSON: Rais was one of three people shot in Dallas within a few days of 9/11. The other two died. The shooter, Mark Stroman thought he was killing Arabs, although none were.

GIRIDHARADAS: He was consumed by this feeling of the nation was under attack after 9/11 and that we were disrespected as a nation by these Arabs living wherever they lived. And that we had to take action, he had to take action. And then he made the leap that these people were also the people who were hiding behind our gas station counters all across the United States.

SEVERSON: This is the kind of neighborhood Mark Stroman grew up in – a tough one with drugs and gangs and alcoholic parents who abused Mark and his siblings. His mother kept telling him she regretted not having the fifty dollars to have him aborted. By the time he was a teenager, he had a parole officer. Tom Boston, the owner of a paint and body shop hired Mark Stroman several years ago. Says he was a good employee at first, but was forced to fire him because of his racist views.

TOM BOSTON: I saw him go through his struggles in life. I saw him trying to better himself and then he just broke. I mean he lost.

SEVERSON: Tom Boston knew one of the victims Mark had shot and killed and had heard from a mutual friend that Mark had been threatening violence against Arabs after 9/11. So reluctantly he relayed his suspicion to a friend in law enforcement. He was immediately called in to look at a closed circuit video of the shooting. 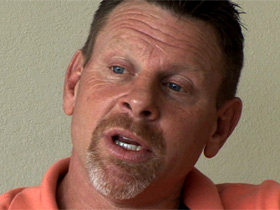 What was your reaction when you saw that tape? (speaking to Boston)

SEVERSON: A few hours later, Mark was arrested on his way to a mall and a mosque, apparently to shoot as many Arabs as he could. He was convicted of murder and placed on death row.

GIRIDHARADAS: Mark Stroman was proud when he was arrested and said, “you know, I did what everybody wanted to do and there were a lot of us out there hunting for Arabs and I took revenge and I’m, I’m a true American."

SEVERSON: Meanwhile, Rais lost almost everything. He still has thirty-five pellets in his face, has lost the sight of his right eye. The hospital kicked him out because he had no insurance. He lost his apartment, no money for food. Lost his fiancé and his father suffered a stroke when he heard the news.

BHUIYAN: That’s part of the American dream. I have seen the bottom in this country that you cannot imagine that is there anything else you could go through.

SEVERSON: But he hung in there, and now he owns a big house in the suburbs, is a systems manager at a high tech company, and oversees data centers in Europe. When things started to go his way, he took his mother from Bangladesh on a pilgrimage to Mecca.

GIRIDHARADAS: And while he was in Mecca, it wasn’t just one thing, it was a variety things which happened to him that made him almost feel that God was kind of tapping him on the shoulder telling him, something. 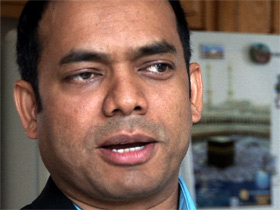 BHUIYAN: And I thought about my shooter, I thought about my assailant. That I was a victim of violence and hate and still God could have taken my life that day. He took two others but he gave me a chance to live. And he brought me up to this. Why? There has to be a reason.

GIRIDHARADAS: And at that moment those words of, “if you save my life now I will do something for others,” that promise he had made to God when he thought he was dying very strongly returned to him.

BHUIYAN: Once I came back from the pilgrimage I realize that I need to forgive him in public and do something to save the life because I strongly believed that if Mark Stroman was given the chance the opportunity which I had in my childhood he would have become a different person.

SEVERSON: Rick Halperin is a professor at Southern Methodist University and Director of the Embrey Human Rights Program. He has worked tirelessly against the death penalty.

RICK HALPERIN (Embrey Human Rights Program): When Rais showed up, he was unwavering in his support to try and save Mark so I was happy to assist him.

GIRIDHARADAS: Mark Stroman was shocked. He told various people that he could not believe that Rais had done this. He taped some messages saying that this was the first act of kindness he’d ever known.

HALPERIN: It says, Rick Halperin, thank you for all you have done for the cause.

SEVERSON: Over the years, Halperin and Stroman wrote letters back and forth and Professor Halperin came to believe that Stroman was a changed man.

HALPERIN: He had at least come to a point of understanding the pain that he was responsible for and the innocent family lives of those who survived his outburst here in Dallas.

BOSTON: Mark was such a conman and very intellectual that he could con a con. He could make you think that he was smelling like roses but in reality he wasn’t.

SEVERSON: Rais has no doubt that Stroman felt remorse but was most concerned that he knew he was forgiven. He was only allowed to speak to Stroman for a few seconds shortly before he was to be executed.

BHUIYAN: So I took that opportunity to talk to him for a few seconds. And I said Mark, you know for sure that I never hated you. I never, you know I forgive you. And he kept telling me that, Rais thank you very much and what you've been doing is amazing I never expected something like this from you something like that. And at some point he called me “ I love you bro”, and at that point I could not hold my tears.

SEVERSON: Stroman was executed on July 20, 2011. Rais gives lectures and speeches throughout the country continuing his message of forgiveness and mercy. For RELIGION & ETHICS NEWSWEEKLY, I'm Lucky Severson in Dallas.

Days after 9/11, Rais Bhuiyan was shot in the head by Mark Stroman in a hate crime targeted at Arabs. Bhuiyan survived the attack, and Stroman was sentenced to death, but Bhuiyan felt compelled by God to show love and compassion for his assailant. Bhuiyan forgave Stroman many times, even seconds before his execution, and says he believes he saw a change in the man that once tried to kill him. Now he has made teaching mercy and forgiveness his life’s work.