PROF. EDWARD BLUM (San Diego State University): We vest so much emotion into the figure of Jesus, whether it’s love him, find our redemption through him, whether it’s animosity toward Jesus, that you live in a culture that, that prizes Jesus and you don’t believe in him, the stakes are so high, the emotions are so high.

BLUM: Whenever we give bible figures actual visible bodies, it can play into our own problems with, whether it’s race or gender or sexuality.

LAWTON: Blum says Jesus poses a particularly interesting challenge because for hundreds of millions of his followers, he was both human and divine. 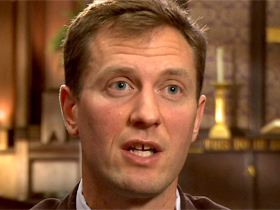 BLUM: Jesus matters so much because of the incarnation, because of this belief that he’s the fleshed body of God. And so if God takes a particular body with particular hair length and particular eye color, then perhaps that says something about the value of that body.

LAWTON: The Gospels give no indication of what Jesus may have looked like. Many Christians over the centuries have been reluctant to portray him at all.

BLUM: When we go back to the Renaissance, and we get painters like Da Vinci and Michelangelo, oftentimes their Jesus is quite feminine with really long hair. I mean, he’s typically pretty emaciated, pretty small physically. In many ways, he looks like a Renaissance painter, you know, he looks kind of like they saw themselves.

LAWTON: Here in the US, the Puritans believed that images of Jesus were unbiblical. But Blum says after the colonial period, Jesus became a white American icon. In the 19th century, Blum says the blond haired, blue-eyed Jesus came to the fore.

BLUM: Groups that are not considered white have often looked at these white Jesus images and said, “Hey, wait a second. He doesn’t look like me. He doesn’t look like someone from the Middle East that I might have interacted with. It kind of looks like white people made Jesus to look white for their own power.”

LAWTON: A prophecy in the Book of Isaiah says the son of God would have no beauty, but Blum says American Christians have been conflicted about how attractive portrayals of Jesus should be.

BLUM: Throughout American history, most churchgoers have been women. And they want a Jesus that can appeal to women and so this is often where you get the long hair and the rosy cheeks, this kind of domesticated Jesus. Some Christians have then rejected that and said, “No, he was a carpenter’s son, he was gritty, he was tough,” and so they want Jesus with, you know, a muscular Jesus who sweats and…because they want to appeal to men.

LAWTON: And especially in the era of pop culture, Christians have questioned whether Jesus should be sexy.

BLUM: They want their Jesus to be attractive enough, but not so attractive that all of a sudden his sexual charisma becomes too potent. He seems less than divine, less than sacred somehow.

LAWTON: Blum says many Americans have seen images of Jesus before they learned how to read, much less wrestle with complex theological ideas. Therefore, he believes, the visual has a profound impact on spiritual perceptions.

BLUM: Most people would say, “oh, no, it doesn’t matter what Jesus looks like,” but when I ask audiences like hey, shut your eyes and what does Jesus look like? They all instantly, immediately have a sense in their heads, and that impacts individuals when they pray, when they sing songs together it, it colors how we see the sacred.

Depictions of Jesus throughout history have caused controversy for many in the Christian faith. The Gospel accounts do not present a description of Jesus’ physical form, yet many different ideas of what he looked like have emerged over two thousand years. Some believe the images are not biblically consistent, and even disruptive to one’s personal view of God and themselves.