Singing: “Used to have a town but the factory moved away.”

BOB FAW, correspondent: He is not just a gifted guitarist and lyricist; Canadian-born Bruce Cockburn has also been described as a combination Bob Dylan and Gandhi; a modern day prophet. Lauded for his genius with the guitar and his poetic songwriting, Cockburn plays a mixture of styles: folk, jazz and rock. And when it comes to his music and his spiritual state, 69 year old Bruce Cockburn has never stopped reaching for more. 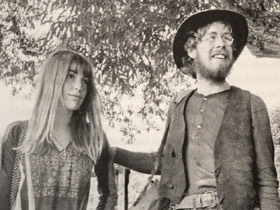 FAW: At 17, Cockburn had a strong interest in spirituality and studied many religions, even flirted with mysticism which culminated—miraculously, he said—with an epiphany when he felt the presence of Jesus on his wedding day with his first wife.

COCKBURN: The sense of his presence was very strong and it was a “him,” there’s no question about that. It registered to me as a male presence that was loving and positive and there was the sensation of light. So that was the basis of my becoming a Christian.

FAW: After that experience, Cockburn's songs contained more religious images. He was labeled "...a Christian songwriter...in the tradition of the prophets."

Singing: “Heaven and earth are full of your light."

COCKBURN: Yeah, well, the broken wheel is the galaxy we call the Milky Way, which is where we live. The song is really, I suppose, about a fallen world and my relationship to that fallen world. The song is about my own feelings of responsibility for the situation as it exists, and it’s like what am I supposed to do with this? 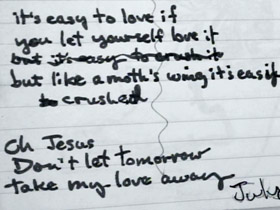 FAW: From Christian songwriter, he became a spiritual seeker exploring various religions and getting involved in many causes as he traveled the world.

FAN: When I was living in Central America and I heard him giving voice to what we were experiencing, I just thought wow, I found a sort of spiritual poet that put war and conflict in really human terms.

FAW: Some of what Cockburn tried to capture in his music, that need to reach out and find something greater, can be heard in his song "All the Diamonds." [Editor's Note: The correct song title should be "Wondering Where the Lions Are."]

“The sun’s up, uh huh, looks ok. The world survives until another day. And I’m thinking about eternity. Some kind of ecstasy got a hold on me.”

COCKBURN: Occasionally there is a feeling when I’m playing that something, that connection with God, is alive and functioning.

FAW: You feel like a conduit at that point? 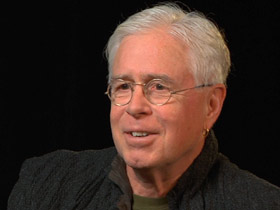 COCKBURN: That’s a good word for it. When I feel like a conduit, I get that little shiver. It’s like there’s...Hi God. There’s God, right here, now.

FAW: His spiritual quest—the ups and the downs—has now been chronicled in his first book with a title lifted from Cockburn's song, "Rumors of Glory."

(to Cockburn): Why the word "rumors"? What was that?

COCKBURN: Because these are hints of things, you’re not really seeing the glory but you’re seeing the suggestion of it or seeing a vestige of it or these little bits of it leaking through.

FAW: And that’s what makes you keep seeking, keep being open?

COCKBURN: I think it sure helps, yeah.

FAW: In a career which has spanned five decades, with 31 albums and numerous awards. In Canada, he's even on a postage stamp.

“You’re like me, you’d like to think we will learn from our mistakes. Enough to know we can’t play God with others lives at stake.” 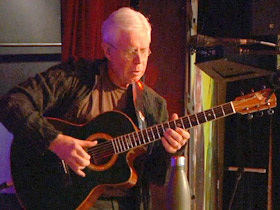 FAW: Now, says Bruce Cockburn, "...in the pulling of notes out of metal...my job is to try and trap the spirit of things."

COCKBURN: I don’t spend much time thinking about trying to get a message across. I feel like, I feel a compulsion to write about what I experience and what I think I see and feel and I have a compulsion of some kind to share that with people. I guess it’s the conceit of every artist that, you know, you think that what you have to say is worth putting out there, that people are gonna be interested,

FAW : And a compulsion too, he makes clear, to being receptive to a mystery he does not fully understand.

FAW: He has a different perspective now, he says, than in that earlier "Christian songwriter" phase. But what is not different for Bruce Cockburn is his status as a seeker.

(to Cockburn): Spiritually, you’re not now where you expect to be?

COCKBURN: I don’t predict about, I don’t make any predictions about that. I just have hopes. Meaning my awareness of it comes and goes and the energy that I might get from it comes and goes. And the lines, it’s like there’s a lot of static on the line which I’d like to get rid of.

FAW: Is that your fault?

FAW: But you’re still listening, or trying to listen?

COCKBURN: I sure am, yeah. I think it’s what we’re here to do.

Over his long career, 69-year-old Canadian singer-songwriter Bruce Cockburn says he was continually reaching for God’s presence, a connection he often feels while performing. His spiritual journey has now been chronicled in his book “Rumors of Glory.”