SAUL GONZALEZ, correspondent: Visit Hollywood Boulevard at night, and this is what you probably expect to see: city lights and glittering marquees and crowds looking for a bit of Tinsel Town glamour. And just steps from all the tourist attractions there’s this place. With its DJ blasting electronic dance music on stage and its young and very hip crowd moving to the beat, you might think this is a trendy Hollywood night club.

But this is MOSAIC church, a Christian house of worship that focuses on ministering to the millennial generation. These are men and women born in the 1980s and ’90s and who came of age in the first years of the 21st century.

ERWIN MCMANUS: Really young. The average age is about 26 years old, maybe 75 to 80 percent of them are single, so it’s a hugely single community. The bulk of our community is probably between the ages of 20 and 34.

GONZALEZ: Erwin McManus is MOSAIC church’s founder and pastor and a man who’s spent his religious career connecting faith to young adults, many of whom grew up with no strong religious beliefs. But McManus says they’re searching for a deeper meaning for their lives. 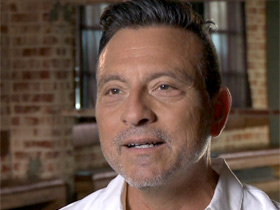 GONZALEZ: Most Americans in their 20s still describe themselves as religious, but according to a poll by the Pew Research Center and Religion & Ethics NewsWeekly, one in three millennials has no affiliation with any house of worship. But that doesn’t rule out their embrace of religious beliefs and practices. Experts say the milennials just want to come to faith on their own terms.

GONZALEZ: And that includes faith?

GONZALEZ: Brie Loskota is managing director for the Center for Religion and Civic Culture at the University of Southern California. She says millennials, especially those in urban areas, often reject strict religious classifications and are more likely than their parents or grandparents did to customize their spiritual identities by drawing from a variety of faiths.

LOSKOTA: You see new forms of hybridity, so I am a “Jew-Bu,” a Jewish-Buddhist, or I’m a “Budeo-Chrisitan”—some of my favorite ones, these kind of mash-ups of religious identity that are really unique. People look at that and say they are so individualistic that all religion will fall. And I think there is a more interesting question, which is how is religion being reconstituted in the 21st century that doesn’t look like it looked in 1950? 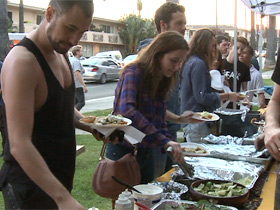 GONZALEZ: Loskota says MOSAIC church and other houses of worship like it represent a new face of 21st-century American faith, with their youth-friendly emphasis on self-expression and creating a sense of community in a relaxed, even party atmosphere. At MOSAIC that atmosphere often includes potluck meals outside the church and playing games before worship services begin. It’s those kind of things that attracted 24-year-old James David to MOSAIC. He’s an aspiring singer who often uses his talents to perform on MOSAIC’s stage.

JAMES DAVID: I can that for or me whenever I step foot into a church I want to feel that I am welcomed and that I am seen, especially being in your 20s that’s what you want anywhere you go. For me the cool thing is going to a church where I feel seen and loved and appreciated. I am having a conversation with someone versus someone is talking to me or at me.

FABIANA BRAGA: It’s the first time that I come to a church like this. The language here is very unique. It is very easy to digest

GONZALEZ: Fabiana Braga, who grew up Catholic in Brazil, says she feels much more comfortable in this environment, both because of her fellow parishioners and the tone set by Pastor McManus.

BRAGA: He talks about freedom. There are a lot of people who come here. The pastor is amazing. The environment is amazing. You meet a lot of interesting people. It’s the first time I connected spirituality with art. I’ve never seen anything like that, and this is so cool.

GONZALEZ: As he bounds on stage for worship service and greets his congregation, both those sitting in the auditorium and watching on the Web, the stylish McManus looks like he could be hosting a television talent show like “American Idol.” 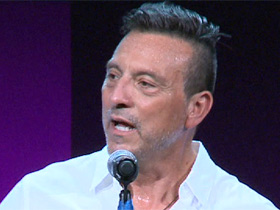 MCMANUS (speaking at MOSAIC): Have you missed that moment when you missed something amazing has happened because you were looking in a different direction?

GONZALEZ: His sermons often focus on how millennials should reject the values of their elders, especially if those values clash with their own ideals.

GONZALEZ: But as they search for meaning, McManus also acknowledges that millennials, like those in his congregation, have been shaped by materialism, pop culture, and technology like no other previous generation. Even as he preaches, it’s easy to spot people in the congregation busily texting and checking their social media feeds on their smartphones. McManus says faith must increasingly compete with these distractions, and he thinks one of the best ways to do it is by making religion entertaining, like what happens at MOSAIC.

MCMANUS: Isn’t that a part of the problem? That we have equated the sacred with the mundane, or the spiritual with the monotonous? So when people say “aren’t you just entertaining them?” I say wait a minute. The word “entertain” means to hold someone’s attention, and what we want is a faith that is vibrant and alive and beautiful and real.

GONZALEZ: But critics of houses of worship like MOSAIC say they, too, often sacrifice traditional beliefs and moral instruction in favor of creating a fun environment. They also argue that pastors like McManus downplay their positions on controversial social issues, such as abortion and same sex marriage, for fear of alienating their young, often more socially progressive congregants. In our conversation with him, McManus acknowledged that he often does steer clear of divisive issues like gay marriage.

LOSKOTA: Culture war issues still do matter, but they matter much less than they did previously.

GONZALEZ: USC’s Brie Loskota says if they want to prosper in the coming years and decades, some American houses of worship will need to adapt to the millennials views on faith and culture—views that, she says, likely won’t change much as the millennials grow older.

LOSKOTA: If I were in a congregation or in a denomination, say in the Christian tradition, that thought that millennials will eventually “get it” and come around, then that would be a signaler for me to be worried. Because I don’t think that millennials are going to change. I don’t think they are going to end up looking just like boomers. And I think if you have institutions that are unwilling to meet them where they are and to help them and experiment with religiosity in ways that bring new life into institutions and also anchor themselves into a tradition, if you are unwilling to go down that path with millennials you should be worried. If that doesn’t happen, then congregations will cease to be congregations, and they’ll become museums.

GONZALEZ: So is MOSAIC church a preview of at least some of the things to come in American religious culture? That’s unknown, but certainly one thing this place isn’t is a museum.

Reports on the under-30 generation suggest that as many as 1 out of 3 are walking away from traditional religious affiliations and organized religion in the US. Erwin McManus, founder and pastor of MOSAIC church in Los Angeles, believes there is more to the story.

None of the Above: Religious Implications

None of the Above: Who Are They?

None of the Above: Interviews with the Religiously Unaffiliated
Tags: Emerging Church, Erwin McManus, Hollywood, Pew Research, religiously unaffiliated