FRED DE SAM LAZARO, correspondent: In geography, culture, and certainly climate, Minnesota seems about as distant as one can get from the Horn of Africa. Yet Minnesota is home to more than 30,000 Somalis, the largest such community in the US. Most are refugees from a war-torn nation that’s long been a haven for Islamist extremists.

Groups like the al Qaeda-linked al Shabaab and Islamic State, or ISIS, have targeted this community, mainly through videos on the internet. The FBI says up to 40 young men from Minnesota have traveled to Somalia or Syria since 2007.

News Anchor: He was the second known American killed while fighting for ISIS in Syria, and he was from right here in Minnesota.

DE SAM LAZARO: The media attention and extremist tactics have been deeply offensive to the community, says 39-year-old Mohamed Amin Ahmed, who’s lived here since 1998 and works in a convenience store.

(to Ahmed) What offended you the most? Is there something that pushed you over the edge? 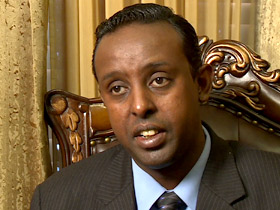 MOHAMED AMIN AHMED: The fact that they claim my faith. It is the greatest inheritance we have is our faith. My goal is to compete, to take the values of the majority of the Muslims and go after the kids between the age of 8 and 16 and compete for their mind-space.

AHMED: ISIS, Islamic State made a video which is action-packed, showing American soldiers being killed and hurt, called “Flames of War.” And I spoofed it. I said well, what you’re actually doing is “Flames of Hell,” because what you’re doing is not war. It is genocide.

Voice on video: "Behead unarmed, innocent people you round up. Destroy."

(Speaking to young Muslim men) You guys have seen the videos on YouTube, right? This is something that competes with that. 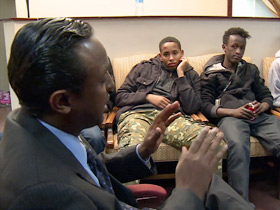 AHMED: You guys have to understand these people are playing a game. It’s not part of religion; it’s not part of Islam. Islam means peace and submission to the will of God.

DE SAM LAZARO: For the young men, though, the lessons they get here contrast with stereotypes many said they must endure.

FIRST YOUNG MAN: I was on my phone, I was just, you know, like reading the Qur’an. I was waiting for the bus, and there was this dude. He was white, he was standing right next to me. So he was looking at what I was doing, because I was wearing a big jacket, a black jacket. Whenever he looks back at me, he thinks kind of like I’m a terrorist or something.

SECOND YOUNG MAN: So some kid came up to me: “Oh, Somali people are terrorists now.” People judge too quick. 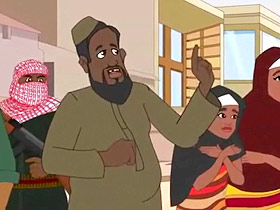 Average Mohamed video: What do you think your job description is when you join Islamic State?

DE SAM LAZARO: Such mentoring relationships are critical to help influence the choice of young men not fully grounded in their native culture, not feeling accepted in their adopted one. Abdi Samatar is a professor at the University of Minnesota and one of the state's earliest Somali residents.

PROFESSOR ABDI SAMATAR (Geography Department, University of Minnesota): The mindset is one that has not a good grasp of its own faith, disconnected from the larger Minnesota community, maybe doing well or not so well in school; sees themselves as black people in a white sea or a "foreign sea." So the attempt by the young Somali man to try to figure out cartoons and images that wILL sort of counter the images that the terrorists put on the web, for instance, is I think an important and insightful agenda on his part.

DE SAM LAZARO: But Samatar says it will take much more to truly impact recruitment—not just offsetting extremist propaganda, but also policy changes. For example, he says the US has not pushed for reform in the highly unpopular government now in Somalia. 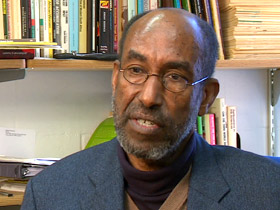 SAMATAR: We have supported quite a dysfunctional government that is by all standards the most corrupt regime that is in the world, as Transparency International tells us, and so that plays in very strange ways to the recruitment of al Shabaab and all kinds of terrorists saying that the United States is not serious about our interest.

DE SAM LAZARO: For his part, Ahmed says he has gotten some negative responses to his efforts. One called him an apostate. But he's not afraid for his safety, he says. Public response has been global and overwhelmingly positive.

AHMED: I’m getting literally hundreds of emails from people wishing me well and, more importantly, telling me about what this particular message did for them or what they understood it to be, and how it helped them in terms of talking about this issue.

DE SAM LAZARO: How do you know that this is something that’s going to resonate with an 18-year-old living in Minneapolis?

AHMED: I focus-group it. So basically, I walked up to a bunch of kids, over 250 of them, and I asked them, “What do you think about suicide bombing? Is it an Islamic principle?" Most of them said, “I think it is.” Now I went back to some of these kids and i showed them a video, and they come back and they say, “Oh, now we know better.” So it does work. But I haven’t been able to quantify in terms of impact. The impact is really hard to gauge. 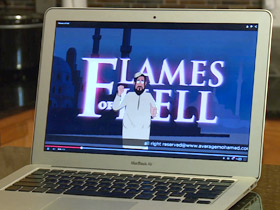 DE SAM LAZARO: It’s a work in progress that he hopes to scale up, he says. For now, it is funded on a shoestring and his own savings. One way he’s kept costs down is to work with a graphic artist he’s never met—in India.

AHMED: The storyboard comes from me, and he passes it over to me, and we spend a couple of days going backwards and forward, taking things out, adding things, improving on them. And then he creates the product, and he sends it back to me.

DE SAM LAZARO: And this is a Hindu gentleman in India?

AHMED: This is a Hindu gentleman in India. The sound board and engineering is done by a Christian white guy here in Minnesota, and I’m a Muslim who is creating this. It’s diversity.

DE SAM LAZARO: He’s hoping to add diversity to this inherently global effort with more cartoons and more languages—Arabic and Urdu, for example—to be used in other parts of the Muslim world.

Radical Islamic groups are using high-quality videos to recruit young Muslims in the US and Europe to join their fight. Now, a Somali Muslim immigrant in Minnesota is fighting back with his own videos—an animated series called “Average Mohamed” that counters extremist ideas about Islam.