MARK BURNETT: We filmed this in Morocco, and we decided to interlace the scripture with the history of the times, and how very dangerous it was to be an apostle. This is one of the most brutal times in history, and it’s a decade that completely changed the world.

"A.D." is probably fifty percent scriptural—Acts of the Apostles—and about fifty percent historical drama. The easiest part is the scripture part because it is what it is, and you don’t change it, and then you weave in what was going on. If you think about the crucifixion and entombing of Jesus, leading to his resurrection...the authorities, the temple authorities, the Romans under Pilate, they didn’t think he resurrected; they assumed it was a hoax. 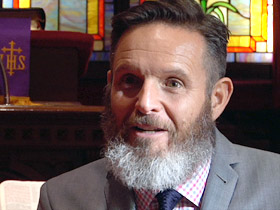 "The tomb is now open, and the Nazarene is gone."

It’s amazing political weaving between the temple authorities and the Romans, and it carries on for the whole season. This really is a political thriller told through the Book of Acts of the Apostles.

Making anything around the Bible, there is a massive responsibility, and that’s why we’ve carefully used theological advisors and church advisors and Jewish advisors. Jesus was Jewish. All the apostles until Paul, including Paul, were Jewish. And so, there weren’t Romans, Jews, and Christians. There were just Romans and Jews. And of course then Samaritans and other ethnicities.

At the time that Jesus was born and the Romans were in control of the region, the Romans had built 2,500 miles of roads and twenty-five major ports. It’s those very Roman roads and ports that were used by the apostles to spread Jesus’ word! It’s like the Roman infrastructure backfired upon them.

It’s amazing that the Romans weren’t able just to kill the twelve apostles and stop Jesus’ message; and instead, those twelve guys took down Rome.

It’s interesting...having made "The Bible" and "AD," and you see the persecution going on in the early church. It’s amazing in 2014 and 2015 now, the persecution of Christians in Iraq and Syria. We put together a cradle fund where we would try to help get these displaced Christians through the winter, at least. We have managed through our fund to help 72,000 Christians get through the harsh Syrian winter. Imagine surviving the persecution and the threats of death, only to freeze to death.

A new television series on Jesus’ ministry and crucifixion is being described as “a political thriller told through the Book of the Acts of the Apostles.” “A.D. The Bible Continues” footage provided by NBC.