KIM LAWTON, correspondent: At the 92nd Street Y in New York, Vanderbilt Divinity School professor Amy-Jill Levine is making the case that Jews and Christians alike need to pay more attention to the Jewishness of Jesus, and the best way to do that, she believes, is by reading the New Testament from a Jewish perspective.

PROFESSOR LEVINE: If I want to understand Jewish history, the New Testament is one of the best sources that I’ve got.

LAWTON: Levine, who is an observant Jew, is co-editor of The Jewish Annotated New Testament, a version of the Christian scripture with footnotes and commentaries written entirely by Jewish scholars. 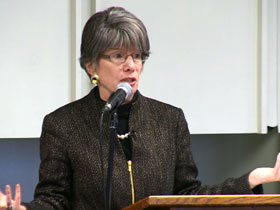 PROFESSOR LEVINE: The New Testament does have extraordinarily beautiful and profound material in it. Paul’s hymn to love in First Corinthians or the parables of the Good Samaritan or the Prodigal Son, or comments such as “God is love,” which is First John. This is magnificent material, and everybody ought to appreciate it. I find for myself the more I read the New Testament, in fact the better Jew I become.

LAWTON: The Jewish Annotated New Testament is one of several new projects urging Jews especially to take a new look at Jesus. Bestselling author Rabbi Shmuley Boteach’s latest book is called Kosher Jesus. That notion, he says, is a radical departure from what he learned as a child.

RABBI SHMULEY BOTEACH (Author, Kosher Jesus): When I grew up Jesus’ name, his very name, was off limits. Jesus was seen as the arch-enemy of the Jewish people. He was really seen as an apostate and traitor to his people.

LAWTON: Boteach believes the time is ripe for a new paradigm. 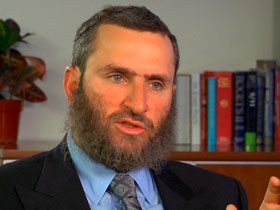 RABBI BOTEACH: We can’t ignore the 600-pound gorilla in the room, which is Jesus. Christians and Jews come together, and they can never mention Jesus. Christians are afraid of offending the Jews, the Jews are uncomfortable with the mention of Jesus.

LAWTON: Growing up in a predominantly Roman Catholic neighborhood in Massachusetts, Levine had the impression that the Christianity of her friends was just a different form of her family’s Judaism, and then she heard otherwise.

PROFESSOR LEVINE: When I was in second grade, a little girl accused me of having killed her Lord, because she had been taught that the Jews were responsible for the death of Jesus. And I couldn’t fathom how this religion that had such beautiful attributes, and a Jewish man named Jesus, and the same Bible, was saying horrible things about Jews. So I started asking questions.

LAWTON: She says her lifelong study has shown her how embedded Jesus was in the Jewish tradition.

PROFESSOR LEVINE: He teaches like a Jew. He talks in parables, and Jews then knew that parables were not simple banal little stories. They were designed to shake us up, to get us to see the world in a new way, to challenge us. And Jesus is just a fabulous Jewish storyteller.

LAWTON: She says his teachings, such as in the famous Sermon on the Mount, are expansions of teachings in the Torah.

PROFESSOR LEVINE: He’s going to the law and bringing out the heart of it, which is also what Jewish teaching does. So he says not only don’t murder; he actually says you have to love your enemy, and he’s the only person in antiquity I’ve found who says that. But I think that gets to the heart of scripture. 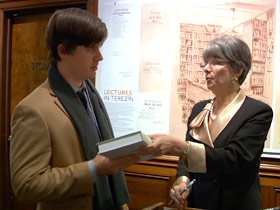 LAWTON: Levine doesn’t shy away from what she calls the “problematic” passages in the New Testament, passages that have been used by Christians over the centuries to persecute Jews.

PROFESSOR LEVINE: We need to know what the New Testament says about the Jewish responsibility for the death of Jesus; how the New Testament characterizes Jewish groups, particularly the Pharisees; and we need to know that within historical context. That doesn’t mean we erase them. It doesn’t mean we fudge the translation. It means we deal with them just as Jews have dealt with those problematic passages in the shared scriptures.

LAWTON: Levine believes Christians too can benefit from studying the Judaism of Jesus.

PROFESSOR LEVINE: Jews have been arguing about the law since Moses came down the mountain.

(to audience):Thank you for that “Amen.” That’s lovely. I wish that happened in my synagogue more often. 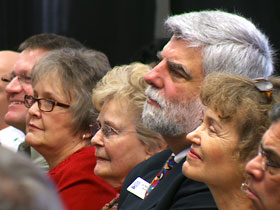 LAWTON: On this day, she was a guest lecturer at the evangelical Oral Roberts University.

LAWTON: She says when Christians don’t understand Jesus’ Jewish context it can lead to misunderstandings about his message, which in turn can lead to harmful stereotypes.

PROFESSOR LEVINE: What I hear in a number of sermons and read in a number of sermons is that Torah is difficult to follow, it’s an impossible burden that weighs people down, and then Jesus comes along and says basically “Don’t worry, be happy.” In actuality, Jews in the first century and Jews who practice Torah today did not find Torah a burden. They found it to be a delight.

LAWTON: Or, she says, many Christians will talk about the angry, vengeful God of the Old Testament in contrast to a New Testament God of love. 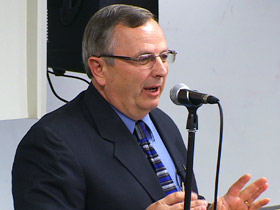 PROFESSOR BRAD YOUNG (Oral Roberts University): It’s crazy that for 2,000 years Christians have followed a faith in Jesus while rejecting the faith of Jesus.

LAWTON: Oral Roberts professor of Judaic-Christian studies Brad Young agrees that Christians must understand the Jewish roots of their faith. He admits many Christians have been too busy trying to convert Jews to try and learn from them.

PROFESSOR YOUNG: Be honest about your beliefs, share them, but be willing to listen to the other side, and maybe that will change some of your beliefs. Maybe our beliefs will change. We need to share it with one another to go to the next step.

LAWTON: And, he acknowledges, the question of whether or not Jesus was the messiah can’t be glossed over.

LAWTON: Rabbi Boteach’s new book does not accept that Jesus was the messiah. Nonetheless, Kosher Jesus has been denounced as heresy by some of Boteach’s fellow Orthodox Jews who worry that the ideas in it could make Jews vulnerable to missionary efforts. Boteach argues that Jews need to reclaim Jesus.

PROFESSOR LEVINE: For people who are afraid that if Jews were to read the New Testament and find some of this truly magnificent material the next thing we know they’re going to line up at the baptismal font and say, “Please convert me”: I don’t think the way we prevent Jews from wanting to convert is to keep them ignorant of the New Testament.

LAWTON: Looking at Jesus through Jewish eyes, she believes, not only strengthens the individual faiths but can also bring them together.

PROFESSOR LEVINE (lecturing to audience): In learning more about each others’ traditions, we come better to respect our neighbors, and if we are really lucky, for Jews reading the New Testament would give us deeper insight into our own Judaism, and for Christians reading the New Testament with Jewish annotations will give Christians deeper insight into the Lord and Savior they worship. Thank you very much.