KIM LAWTON, correspondent: This is Blessed Trinity Roman Catholic Church in Buffalo, New York. Built for German and Irish immigrants in the 1920s, it was once the vibrant center of its working class neighborhood. These days, on an average Sunday, only about 100 people attend morning mass. But, today, Blessed Trinity was “mass mobbed.” Almost 650 people showed up.

LAWTON: The church Mass Mob Movement began in Buffalo, inspired by the cultural fad of so-called flash mobs, where groups of people, organized through social media, show up at public places for seemingly spontaneous displays. Lay Catholic Christopher Byrd is a co-founder of Buffalo Mass Mob. He says as he watched variations of flash mobs, he realized the idea could be used to help churches in his city.

CHRISTOPHER BYRD (Buffalo Mass Mob): We have these glorious, old, historic churches that sit inside of the city and a lot of our immigrant neighborhoods. They’ve kind of fallen off the radar screen over the years and the idea to bring a large group of people here is, it raises awareness. The church, these churches that we attend get a lot of publicity leading up to the Mass Mobs and it fills the church. 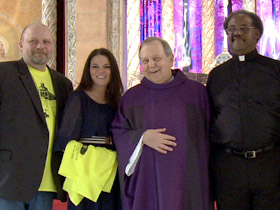 LAWTON: Since late 2013, Buffalo Mass Mob selects a local church and through Twitter, Facebook and websites, the group urges people to come to worship at that church on a specific Sunday. They’ve also started special fundraising projects for the selected church, such as a tee-shirt sale for Blessed Trinity. Mass Mob co-founder Danielle Huber says it’s a welcome shot in the arm for these often struggling congregations.

LAWTON: The movement is now spreading to a wide variety of communities across the country. In Detroit, Archbishop Allen Vigneron has encouraged people to participate.

ARCHBISHOP ALLEN VIGNERON: What a wonderful idea to visit these historic churches to experience their beauty as a way to be renewed in your faith.

LAWTON: But in other areas, church officials have viewed mass mobs with skepticism. And some observers wonder about the movement’s long-term impact. 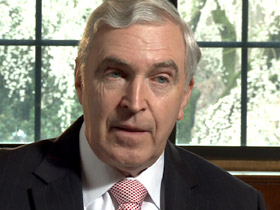 PROF. CHESTER GILLIS (Georgetown University): I think the flash mob is a great thing, I think it’s good for the Church. It’s good for evangelization. But it’s not a long term solution. This is not going to change the landscape of parishes in the United States.

REV. CZESLAW KRYSA (St. Casimir Roman Catholic Church):  The church was the hub of all the activity in this community. So everything was somehow connected with the church or the school. And the church, school and family formed the traditional American Catholic triangle.

LAWTON: As immigrants prospered, they built increasingly grander churches, often modeled on the ones back in their homelands.

GILLIS: They were wonderful. And people sacrificed significantly to build these edifices that are magnificent testimonies to their faith and to God. 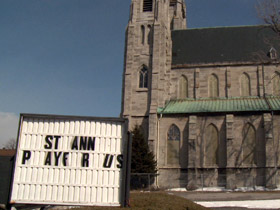 LAWTON: Chester Gillis is professor of theology at Georgetown University. He says as urban neighborhoods started to deteriorate, these local churches fell on hard times as well.

GILLIS: The flight to the suburbs, starting in the 60s and continuing to this day, has just decimated these neighborhoods. And they’re no longer what they were. And those who are left behind, often those who are poorer, many of them are not of the same religious persuasions as their predecessors. And so there’s not a sustainable model for these churches.

LAWTON: Dioceses, including Buffalo, have been forced to close or consolidate parishes, a trend many mass mobbers would love to forestall. Ted Kniazuk has been to almost every Buffalo Mass Mob.

TED KNIAZUK, Mass Mob Participant:  This is something we’ve got to leave for future generations, these beautiful churches. Or it’ll deteriorate and you’ll never see them again.

LAWTON: Blessed Trinity is listed on the National Register of Historic Places. It’s called the “purest replication of 12th century Lombard-Romanesque architecture in the US.” Margaret Dick has been a member of the parish since she was a child in the 1950s, when Mass was often standing room only. She says Blessed Trinity has shaped her entire life. 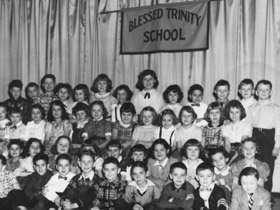 MARGARET DICK (Blessed Trinity Roman Catholic Church): You remember your first communion and how special that was. When we were in high school, we had a CYO, Catholic Youth Organization, did all kinds of things together with the young teens. You do. It’s a real bond.

LAWTON: But in a changing neighborhood, the church no longer plays the role it used to. With fewer regular attenders, it’s difficult to maintain the huge structure.

DICK: It’s very challenging. Especially with a winter like we just endured here because now is the time when you start to see where there’s--and you can’t ever really tell where the roof leak is ‘cause the water runs to the lowest place, so where you see the damage is not necessarily where the roof leak is. So it’s a constant, constant battle.

LAWTON: As a choir member, Dick says it was wonderful to look down during the Mass Mob and see her church again filled, even if just for one Sunday. 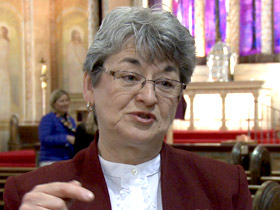 DICK: I don’t think any parish thinks you’re going to gain a tremendous number of new parishioners or something through this, but it’s the idea that people in the community get to value something that they weren’t familiar with before and realize what we have that’s so worth preserving.

LAWTON: Gillis acknowledges a strength of the Mass Mobs is reminding Catholics about their heritage.

GILLIS: You get to see beautiful churches. And you get to see a sense of the history and the richness and the culture and the art to which the Church has contributed significantly in American culture. There’s no question about that.

LAWTON: But he cautions that nostalgia is not a strategy for the future.

GILLIS: It’s not like the Church has dissolved. The Church is vibrant in many, many places. It’s just not in the inner-city places per se. And to say that ‘I wish it were that way,’ it’s wishful thinking. But it isn’t that way. It’s like saying, “I used to love getting my newspaper and my coffee.” Well, now I have my iPad and a latte. 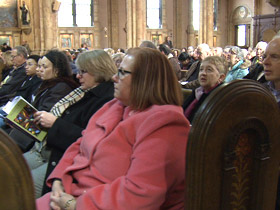 LAWTON: Many Catholics who’ve been involved in Mass Mobs say the movement’s impact has been greater than people realize. St. Casimir’s Church, which averages about 100 people on Sunday mornings, had almost 700 come to a mass mob in January of this year. $4,000 dollars more than usual was collected in the offering. Father Czeslaw Krysa says they’ve benefitted in other ways too.

LAWTON: He says the Mass Mob has provided support for the church’s new mission to be a center of outreach in a community where most people don’t attend St. Casimir’s or any other church. But he believes the most important impact of Mass Mobs is spiritual.

KRYSA: I call this grassroots evangelization from the church point of view. This is a form of outreach, spiritual outreach to the people, otherwise they wouldn’t be responding.

LAWTON: Organizers of the Mass Mob movement say their own faith has been revitalized.

HUBER: I wasn’t coming to church every Sunday. And being a part of this has not only brought me back to church, it has inspired me and reenergized myself. So my objective for everyone else has actually been for myself as well. It’s astonishing.

LAWTON: And they believe, despite the many challenges facing urban churches, strengthened faith will carry Catholics into the future. I’m Kim Lawton in Buffalo.

We take you to Buffalo, New York where a growing grassroots movement has begun among large—and often empty—urban churches across the country. Old and struggling houses of worship have adopted the popular flash mob idea to encourage larger numbers of people to show up at a specific church and attend Mass on a given Sunday. Using social media to organize participants, the goal of a Mass mob is to fill empty pews and collection plates, inspire parishioners to return to church, and support significant sacred sites and houses of worship that have helped define their cities. But some say Mass mobs are not enough of a long-term solution to the many problems historic old city churches face.

Decline of the Irish Catholic Church