BOB FAW, correspondent: Having converted not once but twice, first to Reform and then to Orthodox Judaism, Rabbi Shmuly Yanklowitz is something of an expert on conversions.

RABBI SHMULY YANKLOWITZ: Both of my conversions were incredibly intense and transformative, and in my experience as a rabbi this is the norm. This is a very deliberate and intentional process that affects one’s family, one’s lifestyle, one’s sense of community, one’s values.

FAW: Since his mother was not Jewish, by tradition Yanklowitz was not considered Jewish, so he first converted to follow the faith of his father. The conversion of French-born Catholic Iris Feinstein, engaged to a Jewish doctor, started with curiosity.

IRIS FEINSTEIN: I just wanted to understand better what I was, you know, doing. I was going to Shabbat but I didn’t understand exactly the whole meaning of it. So I decided to take classes just to learn about it. 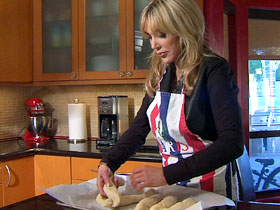 FAW: In her Arizona kitchen, preparing challah bread for the Jewish Sabbath dinner, Diane Faith Lille says she converted to Judaism because her husband is Jewish and because it offered her more than the type of Christianity she had known.

DIANE FAITH LILLE: There was action involved. It wasn’t based on belief—that you had to actually do something.

FAITH-LILLE: You had to live it, you had to do something. I think I was really seeking something that required more, because I feel like God wants you to do, and so to really know God it’s a process of doing, not just believing.

FAW: Faith-Lille converted to Reform Judaism first. Conversion, she says, was a voyage into a strange, often perplexing new world. 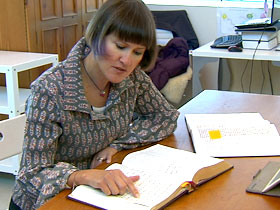 FAW: Now having mastered once unfamiliar routines, like properly setting her table for the Shabbat meal, Virginie Polster, raised in a secular household, remembers when she first converted to Conservative Judaism, how awkward the rituals of her religion seemed.

VIRGINIE POLSTER: You know, as I’m covering my shelves with foil, and you know, sitting with the toothbrush in the crevices of my oven, how is this bringing you closer to God? How is this meaningful, that you’re sitting on your hands and knees scrubbing an appliance? And I think that’s part of the journey.

FAW: Learning new practices is hard enough, but converts say what is even harder is dealing with whispers that somehow the new converts are not fully Jewish.

RABBI YANKLOWITZ: It was my first time in Israel and I was on a bus and I remember breaking down in tears and sharing on the microphone to the whole bus my fear and alienation that had emerged in being told that I wasn’t really Jewish, that I wasn’t really an authentic Jew because my mother was not Jewish. 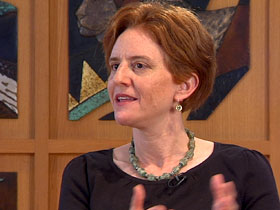 FAW: According to Rabbi Mari Chernow, that whispering happens all too often.

RABBI MARI CHERNOW: It’s definitely out there, and I hate to hear it. It’s really tough and heartbreaking. I tell people that when they convert in our eyes they are 100 percent a Jew. There’s no distinction between me and them. They can study Torah, they can teach Torah, they can become a rabbi. But I also give people a heads up that that sentiment is out there, and I try to reassure them that that’s more about the person saying them than anything coming from the Jewish tradition.

FAW: Troubled by what she heard and feeling she had deeper spiritual needs, Faith Lille converted from Reform to Orthodox Judaism, a two-year process she found daunting.

FAITH-LILLE: In Orthodox Judaism you’re required to do things, and in Reform Judaism there’s not as many requirements. You have to be what’s called Shomer Shabbat, so that means you don’t drive on Shabbat, you don’t cook, you have a kosher kitchen, and they have you practice, in my case, I had to practice having a kosher kitchen for almost a year before the rabbi would kosher my kitchen. Observing all these laws, it can be overwhelming. 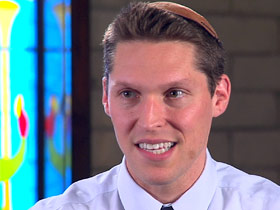 FAW: Rabbi Yanklowitz says conversion to Orthodox Judaism should be “easier” and more inclusive, but that it is becoming just the opposite.

RABBI YANKLOWITZ: Orthodoxy in the 21st century has become more exclusive, stringent, and centralized in its authority than it’s been in all of Jewish history, and what’s at risk is the most traditional form of Judaism becoming more parochial than it’s ever been before.

FAW: For some converts like Iris Feinstein, Reform Judaism, with fewer demands than Orthodox, is ideal.

FEINSTEIN: The pressure level is not as strong as when you’re trying to decide to become Orthodox, and I definitely fell in love with my synagogue, so for me I never really thought about doing something a bit more rigorous. No, the Reform movement is just what fits me.

FAW: And even converts to Conservative Judaism like Virginie Polster say what seemed “rigorous” is now a source of comfort.

POLSTER: It’s meaningful to me, and so as long as I just try to stay focused on why is it that we do what we do to transmit a tradition, to transmit wisdom, to transmit values, to connect to different things, to make the world a holier place, to make life more holy—those are the things that matter, and so that’s what I focus on. 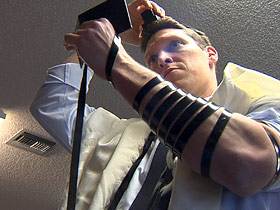 FAW: Some rabbis estimate that three of four people who start the conversion process finish. What is so appealing to Diane and Virginie and Iris is the strong sense of community, of history, and what many converts say is a two-way dialogue with God.

FEINSTEIN: When I first started going to the temple, I realized that opinions and debate were encouraged. It was that exchange with the congregation and, you know, with yourself with God, and I really enjoy that.

FAW: But more is at issue here than personal fulfillment. Judaism is a religion struggling with dwindling numbers and an increase in interfaith marriage.

CHERNOW: I’m more concerned with strengthening the identity of Jews that we have, and Jewish institutions that we have. I think that is probably a way to increase our numbers. If we’re doing great things more people are going to say, “Hey, what’s that about? I think I want to be part of that.”

RABBI YANKLOWITZ: The Jewish people need more converts. Converts bring in diversity into the community. People from other faith backgrounds or nationalisms enter the community and expand the consciousness of the Jewish people. For Judaism to survive in the 21st century and beyond, it needs to be broad, and to not accept converts in the most inclusive way possible challenges that breadth and potentially narrows who we are.

For Religion & Ethics NewsWeekly, this is Bob Faw in Phoenix.

Despite the sometimes lengthy and challenging conversion process—and concerns that converted Jews are not “100 percent” Jewish—many converts to Judaism find fulfillment and a sense of identity in the Jewish faith. According to Shmuly Yanklowitz, an Orthodox rabbi and himself a convert, Judaism will need to become more inclusive and more accepting of converts if it is to to survive in the 21st century.