RABBI SHIRA STUTMAN (Director of Community Engagement, Sixth & I Historic Synagogue, Washington, DC): The Shavuot holiday is actually one of the more important holidays in the Jewish tradition, and it basically has two reasons for being. The original reason comes out of the Israelite people being an agricultural people a few thousand years ago in the land that we now call Israel. The Israelites would bring the bikkurim, the first fruits, the first offerings, of their harvest up to the temple as an offering to God, as a way of saying thank you and in hopes of a good harvest.

After the temple was destroyed in about 70 CE, the rabbis needed to enlarge the understanding of Shavuot because we no longer had a temple to which people could bring their offerings. So they brought forward this understanding of Shavuot as being the anniversary of revelation: the anniversary of the moment that God gave the Torah, our Bible or a part of the Hebrew Bible, to the Israelite people on Mount Sinai, basically turning them from this rag-tag group of slaves who had just weeks ago come out of Egypt into a people complete with its own set of texts and ways of being in the world. 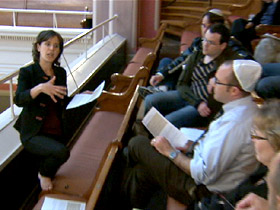 Shavuot, actually, probably more than any other holiday on the Jewish calendar, is very difficult for American Jews in the 21st century to wrap their hands around, and one of the reasons is because there are not a lot of the same home-based rituals that we have, for instance, with the Passover seder or lighting the Hanukkah menorah.

You are seeing more and more people trying to engage Jewish people and Jewish families in the Shavuot holiday in unusual ways, and that is what Sixth & I is doing tonight: people using traditional Jewish texts to have contemporary conversations. What—how does my life have meaning? What are the 10 Jewish commandments of sports? How do we take this tradition that has been going on for thousands of years and make it relevant to us today?

It is traditional to read the Book of Ruth, because it is a book about the barley harvest. It’s also about what happens in a society where there are haves and have-nots, and how we can act as people who have more, or people who have less, and engage each other to make sure that there’s more equity and social justice in the world.

Some of the other traditions you’re going to see here tonight are the making of cheesecake and challah, because on Shavuot the understanding is that we’re supposed to eat dairy foods, because on the day that the Israelites received the Torah they also ate dairy foods.