TARA REED, mother of Ella Reed: She has been through a lot. She has come a long way because at first, the statistics aren't very good with Hydrops babies. She made it through that, and now she is just growing, waiting for her heart surgery. So she will have a shunt put in here in a few weeks.

BETTY ROLLIN, correspondent: And how do you feel about all of this?

REED: It's very, it's very tough to see your child struggle.

ROLLIN: At any point, if you knew how sick she was, would you have let her go? 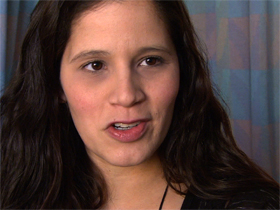 REED: Well, I feel like she is a miracle.

ROLLIN: Two weeks ago, Jasper, who is now three months old and has a rare genetic disease, was near death, but survived. He is going home soon, but his future health is uncertain.

ANGELA MAYHEW: He has a heart condition, he has a murmur, but it's slowly closing. With the G-tube, they are thinking maybe 5-6 months will do another feed study, but until then, he can't have anything by mouth.

ROLLIN: For both of these mothers, who knew how sick their babies were before birth, abortion was not an option.

MAYHEW: I've just always had strong beliefs against, you know, people who, if it's not a perfect child, you know, they would abort, and to me Jasper is perfect. 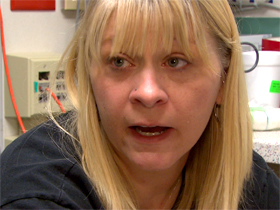 ROLLIN: What if he winds up for a good portion of his life very sick? How will you feel then?

MAYHEW: I will be the mother that he deserves. I will be by his side through the whole thing like I have been. We all know that he's the little miracle, and we wouldn't change anything about him.

ROLLIN: Both the survival and health of these babies have a lot to do with how premature they were at birth. Dr. John Lantos is both a pediatrician and ethicist at the hospital.

DR. JOHN LANTOS, Director of Pediatric Bioethics, Children’s Mercy Hospital: Twenty-three weeks—about half of babies die. Twenty-four weeks, maybe 30 percent of babies die, with some variation by race, gender, and center the big question today is, of the survivors, how many survive without devastating neurologic impairments or other chronic medical problems?

ROLLIN: Problems like brain damage, cerebral palsy, Down Syndrome. Karen Dowe was born at 26 weeks weighing 1 pound 12 ounces. She has severe bowel and digestive problems and already has had one surgery and will soon have another.

(to Pearl Dowe): And what’s been the hardest part of this? 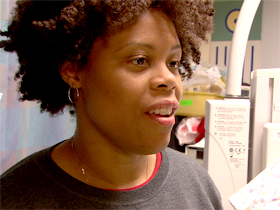 PEARL DOWE: Seeing her have to go through all this and not being able to comfort her.

ROLLIN: One of the torments for both parents and doctors is the question of how much the treatment itself is contributing to the baby’s pain and suffering.

DR. LANTOS: Sick babies in the NICU get between 10 and 20 painful, invasive procedures per day. Needle sticks, shots for various things, new IVs need to get started, suctioning of their endotracheal tube. Narcotics themselves have risks. So it’s a tightrope walk, how much pain medicine to give in order to minimize the pain and suffering without causing more harm from the medication that’s being used to treat the pain.

ROLLIN: In most cases the babies treated here will go home healthy and stay that way. But when the outcome is uncertain, the medical staff sees the choice of whether to treat as both a medical and ethical issue-- shared by the physicians and the family. But it is the family, usually the mother, who makes the ultimate choice. Dr. Brian Carter is a neonatologist and ethicist.

DR. BRIAN CARTER, Neonatologist and Pediatric Bioethicist, Children’s Mercy Hospital: I think personally the most difficult experiences have been those in which I can foresee a child suffering and a parent not really understand that the condition is fraught with suffering and insists upon treatments which are no longer treatments; they’re merely painful interventions. 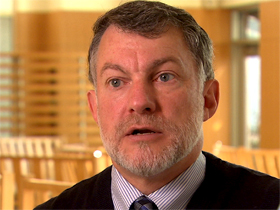 ROLLIN: So what do you do in that situation?

DR. CARTER: In that situation we talk about benefit and risk.

ROLLIN: And what’s the usual outcome of that conversation?

DR. CARTER: The usual outcome is the need for another conversation.

ROLLIN: And what of cost? It varies, but for infants born at 25 weeks who spend an average of three months in intensive care, the total cost could run as high as $900,000. And usually there are medical costs after the baby is discharged.

Religion often plays a role with both the patients and the doctors.

PEARL DOWE: God and I had some very serious conversations. In a sense it wasn't that I doubted Him, I was calling on Him to do what I know He could do.

DR. CARTER: I can cry out to God about them. and I do pray and talk to God about my bad days, believe me. But I won't pretend to know absolutely the will of God. 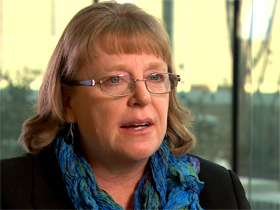 CHAPLAIN BECKY CROUSE: My goal is to meet people where they are, when they come here, and so sometimes that prayer takes the form of just getting them a cup of water, Kleenex, if all they can do is cry, and just standing silently, and so much is just our presence.

ROLLIN: Chaplain Crouse finds that religious parents who were expecting a healthy baby are sometimes angry at God.

CHAPLAIN CROUSE: Anger is a good emotion, and to help them be able to channel that anger into, you know, voicing it. One of the things that I do personally and I recommend to parents is journaling, because it’s a proven way to kind of help release those kind of feelings and just to normalize it, to say it’s okay to be very angry.

ROLLIN: Both religious and spiritual support are given to the families of babies who die. Rachel Courtney knew that her baby, Jack, would have a short life, but wanted it to be meaningful.

RACHEL COURTNEY: He lived for three-and-a-half days, and the whole time we just held him, and he was cuddled in our arms, and we read to him and sang to him. All of our family and friends came in. There was no limitations on how many people or how much time they could spend.

ROLLIN: Babies who have died are memorialized on a quilt, and Children’s Mercy Hospital continues to reach out to the parents. Doctors say the technology of treating very sick infants will continue to improve with a focus on genetic screening and fetal surgery. But with the improvements the ethical questions may increase.

Technology has allowed more and more premature and critically ill newborn babies to survive, but sometimes with major problems. Families, doctors, and chaplains must now face issues of life and death. “The big question today,” observes Dr. John Lantos, a pediatric bioethicist at Children’s Mercy Hospital in Kansas City, “is how many survive without devastating neurologic impairments or other chronic medical problems?”