BOB ABERNETHY, host: After weeks of contentious debate, South Carolina lawmakers passed a bill, signed by Governor Nikki Haley, to remove the Confederate flag from the statehouse grounds. Defenders of the flag said it represented Southern heritage. But others, especially in the African-American community, saw it as a symbol of hatred and oppression. In the wake of that debate, many African-American leaders and others are urging the nation to examine deeper issues of systemic injustice and ongoing racism. Joining me now is our managing editor Kim Lawton and Harold Dean Trulear, associate professor of applied theology at Howard University School of Divinity. Welcome to you both. 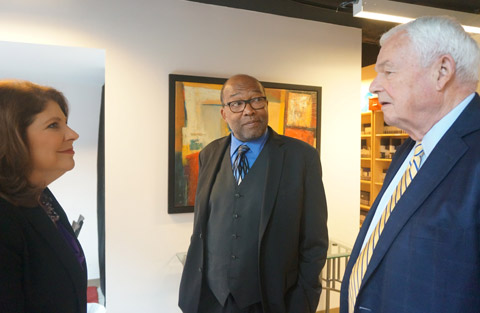 ABERNETHY: Professor, you have said that we all need to change in some way or other, not just change practices or laws, but change ourselves. Who has to do what?

PROFESSOR TRULEAR: Well, I think that all of us have to look within ourselves and see where our own personal attitudes have been impacted by systemic racism, other forms of oppression and exclusion. We have to look at ways in which we have been unconsciously shaped into certain attitudes. I look at things that are simple as the color of Band-Aids and calamine lotion. There is no evil racist coming up with that idea, but it’s just that the white skin color is the norm, has been the norm in this country, and so we need to begin to think about ways of not making white normal and everything else abnormal.

KIM LAWTON, managing editor: What have the events in South Carolina, the debate over the flag and also the tragic shooting in the church—what have they revealed about where we are on these issues?

PROFESSOR TRULEAR: I think they reveal two things, really, and they’re parallel tracks unfortunately, but hopefully they’ll merge up in the distance like regular railroad tracks do. One is uncovered the depth of racism in our country and the ways in which our nation still remains deeply divided. But it’s also uncovered some real people of goodwill. A spirit of forgiveness that started with the families forgiving the young man that shot their family members. And also groups of people from across the country that are holding interfaith rallies and prayer vigils for healing of this racial divide that we have. I don’t think he started, wanted to start a race war. I think we already have the division in place. He’s uncovered it, and now we’re working very hard to try to do some healing.

LAWTON: And what’s the role of the faith community in doing that healing?

ABERNETHY: Professor, quickly—do you have a message for us?

PROFESSOR TRULEAR: We have a lot of work to do, and it really begins with self-examination and looking at the ways in which we’ve done business as usual. We’ve come a long way, but we’ve not come far enough.

ABERNETHY: Okay. Harold Dean Trulear of Howard University. Many thanks to you.

PROFESSOR TRULEAR: Thank you for the opportunity.

A symbol of racial hatred and violence has been removed from the State Capitol in South Carolina, but according to Howard University School of Divinity applied theology professor Harold Dean Trulear, deep divisions and the need for self-examination remain. Watch our conversation about lessons still to be learned, attitudes still to be changed, and the role of faith communities in healing our racial divides. Photos by Lauren Talley.

Harold Dean Trulear: Of, By, and For the Middle

Harold D. Trulear: Where is the Moral Vision?